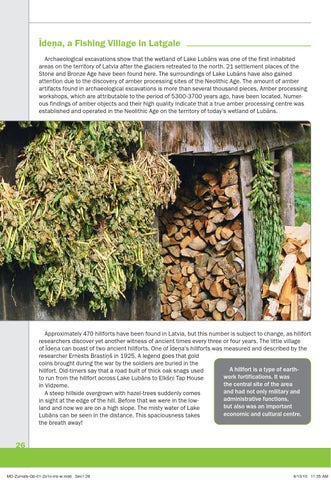 Īdeņa, a Fishing Village in Latgale Archaeological excavations show that the wetland of Lake Lubāns was one of the first inhabited areas on the territory of Latvia after the glaciers retreated to the north. 21 settlement places of the Stone and Bronze Age have been found here. The surroundings of Lake Lubāns have also gained attention due to the discovery of amber processing sites of the Neolithic Age. The amount of amber artifacts found in archaeological excavations is more than several thousand pieces. Amber processing workshops, which are attributable to the period of 5300-3700 years ago, have been located. Numerous findings of amber objects and their high quality indicate that a true amber processing centre was established and operated in the Neolithic Age on the territory of today’s wetland of Lubāns.

Approximately 470 hillforts have been found in Latvia, but this number is subject to change, as hillfort researchers discover yet another witness of ancient times every three or four years. The little village of Īdeņa can boast of two ancient hillforts. One of Īdeņa’s hillforts was measured and described by the researcher Ernests Brastiņš in 1925. A legend goes that gold coins brought during the war by the soldiers are buried in the A hillfort is a type of earthhillfort. Old-timers say that a road built of thick oak snags used work fortifications. It was to run from the hillfort across Lake Lubāns to Elkšņi Tap House the central site of the area in Vidzeme. and had not only military and A steep hillside overgrown with hazel-trees suddenly comes administrative functions, in sight at the edge of the hill. Before that we were in the lowbut also was an important land and now we are on a high slope. The misty water of Lake economic and cultural centre. Lubāns can be seen in the distance. This spaciousness takes the breath away! 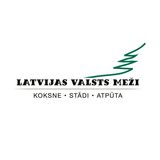