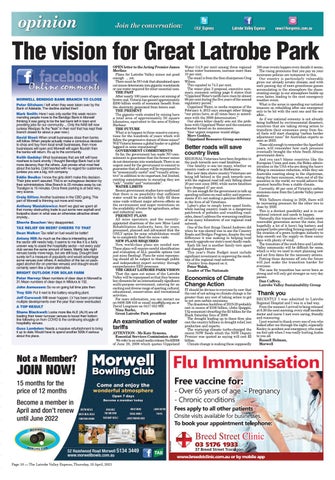 The vision for Great Latrobe Park Online comments MORWELL BENDIGO BANK BRANCH TO CLOSE Peter Gitsham: I left when they were taken over by the Bank of Adelaide. The decline started then! Mark Smith: Here I was only earlier this week recommending people move to the Bendigo Bank in Morwell thinking it was going to be the last bank left in town and providing jobs for our community ... Only the NAB left now (unless Westpac fix the “leak” in their roof that has kept their branch closed for about a year now.) David Steel: When small businesses close then banks will follow. When people actually make a conscious decision to shop and buy from local small businesses, then more businesses will open and Morwell will again flourish then the banks will return. It’s up to the community. Keith Gadsby: What businesses that are left will have nowhere to bank shortly. I thought Bendigo Bank had a bit more decency than the others. Just proves what most feel about the banks. Cold hearted with no regard for customers, (unless you are a big, rich company. Eddie Beulke: I know the girls didn’t make this decision. Their jobs aren’t assured. This is an outrageous decision by their administrators. Moe Branch is 25 minutes away by car. Traralgon is 15 minutes. Once there parking is at best very, very scarce. Craig Gittos: Another business in the CBD going. This part of Morwell is thinning out more and more. Anthony Wasiukiewicz: Aren’t we glad we spent all that money obstructing trade to put some new asphalt and footpaths down in what was an otherwise attractive street anyway... Sherrie Boucher: Very disappointed. TAX RELIEF ON BEER? CHEERS TO THAT Dean Walker: Tax relief on fuel would be better! Antony Hilf: As much as the idea is interesting and the sector still needs help, it seems to me like it is a fairly uneven way to assist the hospitality sector - not every pub/ club serves the same amount of beers. Mainly late night venues barely move kegs, but are still busy. Draught beer surely isn’t a measure of popularity and would advantage some venues over others. A reduction of the tax on packaged alcohol (for on premise venues) and draught would certainly seem like a fairer alternative. BRIGHT OUTLOOK FOR SOLAR FARM Peter Harvey: Mean numbers of clear days in Morwell is 31. Mean numbers of clear days in Mildura is 132. John Asmussen: So no on going full time jobs then Troy Gill: Put it next to the battery recycling plant. Jeff Curwood: Will never happen. LV has been promised multiple developments over the year that never eventuated. A TOP RESULT Shane Blackwell: Looks more like ALE (ALH) are off loading their lower turnover venues to boost their bottom line following on from COVID &amp; the continuing struggle of hospitality venues. Guss Lambden: Needs a massive refurbishment to bring it up to date. Would have to spend another 500k if serious about the place.

OPEN letter to the Acting Premier James Merlino Plans for Latrobe Valley mines not good enough ... yet. There must be NO risk that abandoned open cut mines deteriorate into gigantic wastelands or use water required for other essential uses. THE PAST After nearly 100 years of open cut mining of brown coal,Victoria has gained approximately $200 billion worth of economic benefit from the electricity generated from brown coal. THE PRESENT The gigantic voids created by mining have a total area of approximately 50 square kilometres, equivalent to the area of Sydney Harbour. THE FUTURE What is to happen to these massive excavations for the hundreds of years which will follow the progressive closure of these mines? Will Victoria become a global leader or a global laggard in mine repurposing? GOVERNMENT COMMITMENTS So far, the government has made NO commitment to guarantee that the former mines do not deteriorate into wastelands.There is an urgent need for the government to commit to guarantee that all mines will be repurposed to be “economically useful” and “visually attractive” in addition to its important, but limited, existing commitments to ensuring they are “safe”, “stable” and “sustainable”. WATER LIMITS Recent government studies have confirmed that there is no possibility that sufficient water would be available to fully fill these mine voids without major adverse effects on the environment and major restrictions on the availability of water for agriculture, urban and industrial uses. PRESENT PLANS All mine operators, and the recentlyappointed chairman of the new Mine Land Rehabilitation Authority, have, for years, presumed, planned and advocated that the ONLY option for mine rehabilitation would be to completely flood the mine voids. NEW PLANS REQUIRED New, world-class plans are needed now. These plans will require careful identification and evaluation of ALL possible options (not just mine flooding). Plans for mine repurposing should all be subject to thorough public and independent expert scrutiny through comprehensive EES processes. THE GREAT LATROBE PARK VISION That the open cut mines of the Latrobe Valley will be repurposed so that they become key elements for an internationally significant multi-purpose environment, catering for an exciting and diverse range of sporting, cultural, educational, conservation and recreational activities. For more information, you can contact me on 0408 598 410 or email nina@glp.org.au or David Longmore on 0417 052 909. Nina Burke, Great Latrobe Park president

An examination of water tariffs

IT should be obvious to everyone by now that the cost of not acting on climate change is far greater than any cost of taking action to get to net zero carbon emissions. The disastrous bushfires of 2019-20 probably cost in excess of $100 billion, (John Quiggin, UQ economist) dwarfing the $3 billion for the Black Saturday fires of 2009. The drought leading up to these fires also cost the country billions in drought relief, lost production and exports. The warming climate turbo-charged the recent NSW floods which the NSW Deputy Premier was quoted as saying will cost $2 billion. Climate change is making these supposedly

RECENTLY I was admitted to Latrobe Regional Hospital and I was in a bad way. From the moment I arrived to being released at 6.30 the next morning, every staff member, doctor and nurse I met were caring, friendly and reassuring. I just wanted to thank every one of you who looked after me through the night, especially Keeley in accident and emergency, who made me feel safe when I was really hurting, kudos to you all. Russell Holman, Morwell

Fees apply to all other patients Onsite visits available for businesses. To book your appointment telephone: GP1624589

REGIONAL Victorians have been forgotten in the push towards zero road fatalities. One fatality is one too many, whether on country roads or roads in Melbourne. But new data shows country Victorians are being left behind in the push towards zero, with the regional road toll only falling about 20 per cent since 2000, while metro fatalities have dropped 47 per cent. It’s not enough for the government to talk up spending millions on road safety and improvements if it’s not making a genuine difference in the lives of all Victorians. Labor’s plan to simply lower speed limits, while leaving country roads in a dangerous patchwork of potholes and crumbling roadsides, doesn’t address the worsening condition of too many kilometres of our regional road network. One of the first things Daniel Andrews did when he was elected was to axe the Country Roads and Bridges Program, despite the real difference it was making in helping local councils upgrade our state’s most deadly roads. Each life lost is another family torn apart and changed forever. This year’s State Budget must include significant investment in improving the condition of the regional road network. Country lives depend on it. Peter Walsh, Leader of The Nationals

Better roads will save country lives

100-year events happen every decade it seems. The rising premiums that you pay on your insurance policies are testament to this. Our country is particularly vulnerable given our already erratic climate, and with each passing day of more greenhouse gasses accumulating in the atmosphere the chaoscreating energy in our atmosphere builds up even faster, leading to the next emergency weather event. What is the sense in spending our national treasure on rebuilding after one emergency only to be hit with the next one and the one after... As if our national economy is not already being buffeted by environmental disasters, countries that are taking strong action to transform their economies away from fossil fuels will start charging “carbon border adjustment taxes” for Australian exports as soon as 2023. Those old enough to remember the Apartheid years, will remember how such pressure eventually brought the white South African government down. And you can’t blame countries like the European Union and soon, the Biden administration in the USA who are doing the heavy lifting in emissions reduction, while they see Australia coasting along in the slipstream, doing the bare minimum, when out of all the countries in the world, we would achieve the greatest benefits from a stable climate. Currently, 40 per cent of Victoria’s carbon emissions come from the Latrobe Valley power stations. With Yallourn closing in 2028, there will be increasing pressure for the other two to close by 2030. This is a distinct possibility and is in our national interest and needs to happen. Naturally, this transition will include more renewable generation across the state, (but hopefully a lot of it here), big battery and pumped hydro providing firming capacity and the creation of a green hydrogen industry to help smooth out the supply on those sunny days with plenty of wind. The transition of the work force and Latrobe Valley community will be difficult for some, which is why we need to start planning now and set firm dates for the necessary actions. Putting these decisions off into the future will just make the transition harder for everyone. The case for transition has never been as strong and will only get stronger as very day passes. Dan Caffrey, Latrobe Valley Sustainability Group

Water (14.9 per cent) among three regional urban water businesses, increase more than 10 per cent. The email is from the then chairperson Greg Wilson. This equated to 74.5 per cent. The water plan 3 proposal, executive summary, economic setting page 6 states that “Gippsland Water’s tariffs have risen by almost 98 per cent during the five years of the second regulatory period.” Gippsland Water, in media response of the February 4, 2013 says amongst other things “our prices have, at all times been in accordance with the 2008 determination.” Our above letter clearly sets out the problems with Gippsland Water and the economic disaster forced on its consumers. Your urgent response would oblige. Merv Geddes, Gippsland Resource Group secretary

www.breedstclinic.com.au or by moblie app 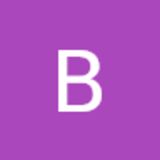