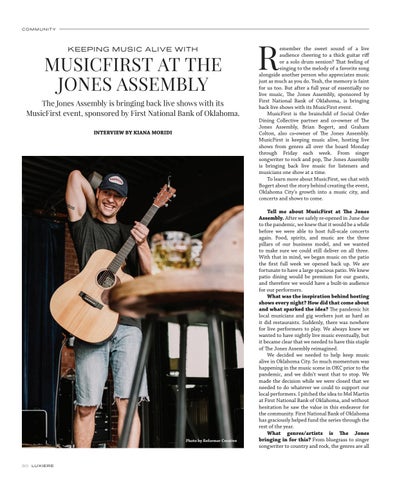 MUSICFIRST AT THE JONES ASSEMBLY The Jones Assembly is bringing back live shows with its MusicFirst event, sponsored by First National Bank of Oklahoma. INTERVIEW BY KIANA MORIDI

emember the sweet sound of a live audience cheering to a thick guitar riff or a solo drum session? That feeling of singing to the melody of a favorite song alongside another person who appreciates music just as much as you do. Yeah, the memory is faint for us too. But after a full year of essentially no live music, The Jones Assembly, sponsored by First National Bank of Oklahoma, is bringing back live shows with its MusicFirst event. MusicFirst is the brainchild of Social Order Dining Collective partner and co-owner of The Jones Assembly, Brian Bogert, and Graham Colton, also co-owner of The Jones Assembly. MusicFirst is keeping music alive, hosting live shows from genres all over the board Monday through Friday each week. From singer songwriter to rock and pop, The Jones Assembly is bringing back live music for listeners and musicians one show at a time. To learn more about MusicFirst, we chat with Bogert about the story behind creating the event, Oklahoma City’s growth into a music city, and concerts and shows to come. Tell me about MusicFirst at The Jones Assembly. After we safely re-opened in June due to the pandemic, we knew that it would be a while before we were able to host full-scale concerts again. Food, spirits, and music are the three pillars of our business model, and we wanted to make sure we could still deliver on all three. With that in mind, we began music on the patio the first full week we opened back up. We are fortunate to have a large spacious patio. We knew patio dining would be premium for our guests, and therefore we would have a built-in audience for our performers. What was the inspiration behind hosting shows every night? How did that come about and what sparked the idea? The pandemic hit local musicians and gig workers just as hard as it did restaurants. Suddenly, there was nowhere for live performers to play. We always knew we wanted to have nightly live music eventually, but it became clear that we needed to have this staple of The Jones Assembly reimagined. We decided we needed to help keep music alive in Oklahoma City. So much momentum was happening in the music scene in OKC prior to the pandemic, and we didn’t want that to stop. We made the decision while we were closed that we needed to do whatever we could to support our local performers. I pitched the idea to Mel Martin at First National Bank of Oklahoma, and without hesitation he saw the value in this endeavor for the community. First National Bank of Oklahoma has graciously helped fund the series through the rest of the year. What genres/artists is The Jones bringing in for this? From bluegrass to singer songwriter to country and rock, the genres are all 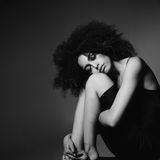