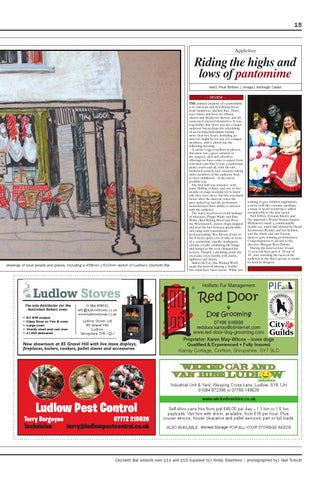 drawings of local people and places, including a 458mm x 610mm sketch of Ludlow’s Cicchetti Bar

The primary purpose of a pantomime is to entertain and Red Riding Hood, from Appletree, did just that. There were hisses and boos for villains, cheers and shrieks for heroes, and all concerned enjoyed themselves. It was regrettable that there was not a larger audience but perhaps the scheduling of an exciting pantomime lasting more than two hours, including an interval, might be too late for younger members, with a school day the following morning. A curate’s egg (excellent in places), this show was a great antidote to the magical, slick and effortless offerings we have come to expect from television and film. It was a traditional panto, warts and all, with the oldfashioned scenery and costumes taking older members of the audience back to their childhood – in the nicest possible way. The first half was tentative, with some fluffing of lines, and one or two people on stage seeming not to know why they were there, but this was much better after the interval, when the pace picked up and the performers demonstrated their ability to interact with the audience. The starry-eyed lovers (with lashings of mascara), Poppy Wilde and Dan Wilby (Red Riding Hood and Peter the Woodcutter), posed, thigh-slapped and trod the line between predictable and camp with consummate professionalism. Ros Brown (Fairy of the Forest) spent a lot of time in front of a, somewhat, visually inadequate curtain, vocally combating the bangs and bumps as the crew changed the scenery. Despite a plodding script she overcame every hurdle with clarity, lightness and charm. Simon DeVay (the Wicked Wolf) made the most of playing a ‘baddie’ but could have been scarier. While not

wishing to give children nightmares, a more wolf-like costume (perhaps a mask or head) would have added considerably to the fear factor. Neil Jeffery (Granny Knott) and the impressive Wayne Swann (Squire Bullymore) made a commendable double act, aided and abetted by David Scotswood (Reddy) and Ian Seddon, and the whole cast and Fuzion dancers gave winning performances. Congratulations to all and to the director, Morgan Rees-Davies. During the interval four 10 and 11-year-old boys gave it ‘10 out of 10’, and, watching the faces of the audience at the final curtain, it would be hard to disagree.

The sole distributor for the Australian Bakers oven: • • • • • 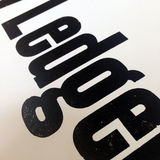 Welcome to the online-edition of issue 12 – the hyperlocal free print newspaper all about Ludlow, Shropshire – past and present – with colum...

Welcome to the online-edition of issue 12 – the hyperlocal free print newspaper all about Ludlow, Shropshire – past and present – with colum...