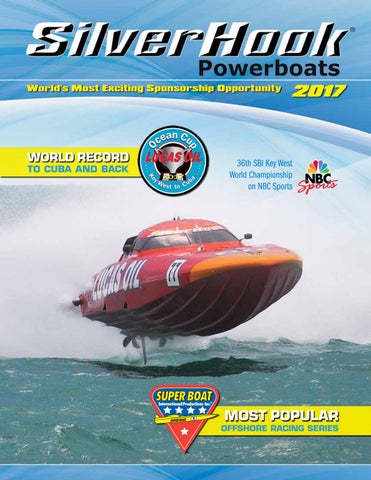 world record to cuba and back

A Message From Team SilverHookÂ® Powerboats.... 2

SilverHook® Powerboats is the new frontier in ocean speed and safety. A radically unique boat, designed from experience and ingenuity to be the fastest, most efficient mono-hull (of all time). The team is on the fast track to breaking the Unlimited Speed Record for immersed propeller mono-hulls. The SilverHook® factory team competes in the 2017 Super Boat International series. Six Grand Prixes each competing over a 3 day weekend culminating in the points for the national championship, topped with a season finale with three races in November held at the 37th Annual Key West World Championships – SilverHook®, carrying its Lucas Oil sponsorship, is gunning for that coveted title and fifth World Championship.

Lucas Oil has proved to be the fastest growing motor sports driven brand over the past 21 years. Team captain and throttleman, Nigel Hook, promises “We have promoted Lucas Oil across the world for the last 17 years... join us as an associate sponsor and hold on for the ride – nothing comes close to 140 mph in up to 6-foot seas! Supercharge your brand with us.”

Attracts thousands of fans at each event

Local media at every event

88 million U.S. recreational boaters (at least once during the year)

KEY WEST WORLD CHAMPIONSHIP 2017 will be the 37th anniversary of the Super Boat International Key West World Championships. Founder, John Carbonell, organized the first club race in 1980 and, ever since, it has attracted competitors from around the world. Racers converge on the tropical island community during the second week of November for the most exciting and fastest event in all powerboat racing. Key West World Championship Facts • $30,525,000 estimated economic impact during race week • 45,000 people attend Duval Street boat parade • 70,000 - 80,000 people during Championship week • Largest event for Key West People and Parties • Over 4,620 rooms in Key West sold race week • 87% occupancy average for week (26.1% increase over 2014) • Average 60 parties a night Wednesday through Sunday • Multiple cruise ships port during championship week

Super Boats are the most powerful and fastest styles of race boats in the world. Teams compete on unpredictable ocean waves and on famous inland waterways. Fans watch from yachts, piers and crowded beaches as race boats drag race along the shores.

12 laps and 60 miles of competition

Racing 75 feet off beaches and shoreline

Race attendance has reached upwards of 150,000

Photo Credit: Chuck Carroll ÂŠ2017 SilverHookÂŽ Powerboats LLC. All Rights Reserved. This document contains confidential information and may not be reproduced or distributed without prior written permission.

Photo Credit: Emilia Hillerstrom ©2017 SilverHook® Powerboats LLC. All Rights Reserved. This document contains confidential information and may not be reproduced or distributed without prior written permission.

Powerboat Racing provides excellent “real estate” for branding your logos and identity. A huge logo presence on the boats, team transporters and uniforms combine to give sponsors the most impact and potential for exposure.

ASSOCIATE LEVEL ADVERTISING OPPORTUNITY Bask in the glory of being in the limelight of the world’s fastest Ocean Vee Race Boat showcased with the prestigious 77 Lucas Oil team. The excitement generated by racing fans, television cameras, and journalists from around the world creates an ideal environment for international exposure of your products and services before, during, and after the race. Your company logo on race boats and support vehicles •

Receive advertising value every second the race boat is seen on television or by the fan at the race.

Pictures last forever... Lucas Oil does a lot of advertising with this boat and your company logo is along for the ride.

Colts stadium boat - the show boat hanging is the Colts stadium will be decaled like the active race boat. Seen by over a million people a year.

Draw business to your location with a live appearance of our pilots to greet customers, sign autographs, and pose for photographs.

Promote a special event or campaign with the presence of the eye-catching race boat.

Your logo on pilot and crew clothing •

Use the buzz created by pilot appearances and media interviews to increase brand loyalty.

Invite your customers, best prospects, and employees to a race where they can have their pictures taken with our pilots and our race boat featuring your logo

Create awareness and visibility to launch a new product or service, enter a new market, or simply get the word out.

Use of pictures of race team •

Gain zing in magazine advertising by using pictures of the race boat or pilots endorsing your products.

Build awareness in social media such as YouTube by creating a video of our pilots visiting your company.

Drive traffic to your retail locations or websites.

Ride of a lifetime! •

Take a ride in the world’s fastest ocean race boat.

Name/Logo on both sides of WSR race boat – hatches behind capsule (5’ x 2’, both sides)

Name/Links Featured in all Press Releases

Name/Logo on side of WSR race boat

Name/Logo on side of Augusta 109C Helicopter

Name/Logo on side on all 3 40’ Support Boats

Most prominent dedicated display both in Race Village

LUCAS OIL OCEAN CUP Two World Speed Records – to CUBA and Back Authenticated by the UIM, scanctioned in the US by APBA and in Cuba by Hemingway International Yacht Club of Cuba with race management by Powerboat P1. The event is supporting the Key West Community Sailing Center youth team’s cultural exchange event with the Hemingway International Yacht Club of Cuba.

Fly by the US Embassy - Malecón Coast

LUCAS OIL STADIUM Home of the NFL Indianapolis Colts The Lucas Oil Stadium with its state-of-the-art retractable roof seats 63,000 for football, and can also be reconfigured to seat 70,000 for NCAA basketball and the 2012 Super Bowl. This stadium hosts major conventions, trade shows, exhibitions and concerts. Lucas Oil Stadium has consistently ranked as one of the best stadium experiences in all of sports, taking the top spot on the Stadium Journey 2012 best stadium experiences list. It has been the highest ranked NFL stadium experience every year since 2011. The Lucas Oil Plaza is approximately 30,000 square fee of WOW and highlights the Lucas Oil histroy of racing. Fans have a unique excalator view of Nigel’s raceboat which was featured in the Miami Vice movie. Lucas Oil racers hold special autograph sessions during pre-game activities.

• National and International publications cover Super Boat racing, the venues and the teams • Colorful, unique and expensive boats grace magazine covers and excite fans • Industry trade publications contribute stories, photos and results for the entire series that runs May through November • Non traditional magazines and phone books have adorned their covers with Offshore Race Teams • Publications have added online content to compliment their newsstand publications, extending the life of the stories

One of the most important aspects of marketing and communication activation is properly taking advantage of media exposure. Creating and maintaining positive momentum in the media is paramount. Activation of a strong public relations campaign can expect solid local media coverage and with the right tactics, could expect a reasonable amount of national coverage. Much of today’s newspaper coverage includes the media outlet’s online digital partner. The shelf life of the coverage is extended and broadened beyond the local market.

Superboat.com traffic exceeds millions of hits per year and keeps users on the site for extended periods of time. Numerous marine related websites produce or distribute racing content around the globe.

Seen Around the World Ability to pre-register to receive text or email notifications when LIVE coverage begins. • Over 1,000,000 viewers and growing • Smart phone ready

Social media is more than just water cooler talk when it comes to offshore super boat racing. The explosion of Facebook, Twitter, Instagram, YouTube and other social sites has penetrated more offshore fans and boating enthusiasts in the heart of major metropolitan cities. Active users and fans post pictures and videos online at a startling rate. GLOBAL DIGITAL STATS

1 in every 13 people on the planet is on Facebook

Currently runs over 1 million computer servers around the world

Handles over 1 billion searches per day

More than 70 translations are available

Daily visitors to Google is 620 million

People spend over 700 billion minutes per month on Facebook

Over 2 billion videos are viewed every day

DEMOGRAPHICS Recreational Boating Demographics • 72% of boat owners have a household income less than $100,000 • 8-in-10 boaters are middle class – who exceed the average income of $75,000 per year • 1-in-10 U.S. households own a boat – average of 32 percent of all adults will go boating in a 12-month period • Recreational boating is seasonal by region – Boat owners spent an average of 28 days (or 14 total weekends) on the water in a year (Warmer climates average significantly higher averages)

Recreational Boating Facts and Figures • 35 billion dollar industry • 338,500 Marine industry jobs (manufacturing, dealers/wholesalers, services) at 34,800 marine industry businesses • 93% of the boats sold in the U.S. are made in the U.S. • U.S. recreational boating industry 2014 saw a 7-8 percent increase in sales of new powerboats with an estimated continued growth of an additional 5 percent in 2015 ©2017 SilverHook® Powerboats LLC. All Rights Reserved. This document contains confidential information and may not be reproduced or distributed without prior written permission. 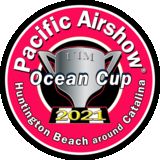