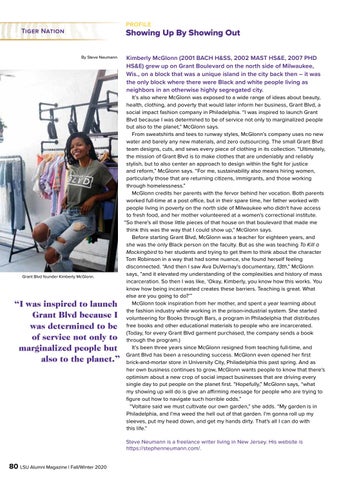 Showing Up By Showing Out By Steve Neumann

“I was inspired to launch Grant Blvd because I was determined to be of service not only to marginalized people but also to the planet.”

Kimberly McGlonn (2001 BACH H&amp;SS, 2002 MAST HS&amp;E, 2007 PHD HS&amp;E) grew up on Grant Boulevard on the north side of Milwaukee, Wis., on a block that was a unique island in the city back then – it was the only block where there were Black and white people living as neighbors in an otherwise highly segregated city.

It’s also where McGlonn was exposed to a wide range of ideas about beauty, health, clothing, and poverty that would later inform her business, Grant Blvd, a social impact fashion company in Philadelphia. “I was inspired to launch Grant Blvd because I was determined to be of service not only to marginalized people but also to the planet,” McGlonn says. From sweatshirts and tees to runway styles, McGlonn’s company uses no new water and barely any new materials, and zero outsourcing. The small Grant Blvd team designs, cuts, and sews every piece of clothing in its collection. “Ultimately, the mission of Grant Blvd is to make clothes that are undeniably and reliably stylish, but to also center an approach to design within the fight for justice and reform,” McGlonn says. “For me, sustainability also means hiring women, particularly those that are returning citizens, immigrants, and those working through homelessness.” McGlonn credits her parents with the fervor behind her vocation. Both parents worked full-time at a post office, but in their spare time, her father worked with people living in poverty on the north side of Milwaukee who didn&#39;t have access to fresh food, and her mother volunteered at a women&#39;s correctional institute. “So there&#39;s all those little pieces of that house on that boulevard that made me think this was the way that I could show up,” McGlonn says. Before starting Grant Blvd, McGlonn was a teacher for eighteen years, and she was the only Black person on the faculty. But as she was teaching To Kill a Mockingbird to her students and trying to get them to think about the character Tom Robinson in a way that had some nuance, she found herself feeling disconnected. “And then I saw Ava DuVernay’s documentary, 13th,” McGlonn says, “and it elevated my understanding of the complexities and history of mass incarceration. So then I was like, ‘Okay, Kimberly, you know how this works. You know how being incarcerated creates these barriers. Teaching is great. What else are you going to do?’” McGlonn took inspiration from her mother, and spent a year learning about the fashion industry while working in the prison-industrial system. She started volunteering for Books through Bars, a program in Philadelphia that distributes free books and other educational materials to people who are incarcerated. (Today, for every Grant Blvd garment purchased, the company sends a book through the program.) It’s been three years since McGlonn resigned from teaching full-time, and Grant Blvd has been a resounding success. McGlonn even opened her first brick-and-mortar store in University City, Philadelphia this past spring. And as her own business continues to grow, McGlonn wants people to know that there&#39;s optimism about a new crop of social impact businesses that are driving every single day to put people on the planet first. “Hopefully,” McGlonn says, “what my showing up will do is give an affirming message for people who are trying to figure out how to navigate such horrible odds.” “Voltaire said we must cultivate our own garden,” she adds. “My garden is in Philadelphia, and I&#39;ma weed the hell out of that garden. I&#39;m gonna roll up my sleeves, put my head down, and get my hands dirty. That&#39;s all I can do with this life.” Steve Neumann is a freelance writer living in New Jersey. His website is https://stephenneumann.com/.

Read up on how the LSU Alumni Association is bringing Tigers together through LSUTigerNation.com, celebrate the August 2020 graduates, remember our friend Lod Cook, and more! 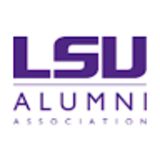