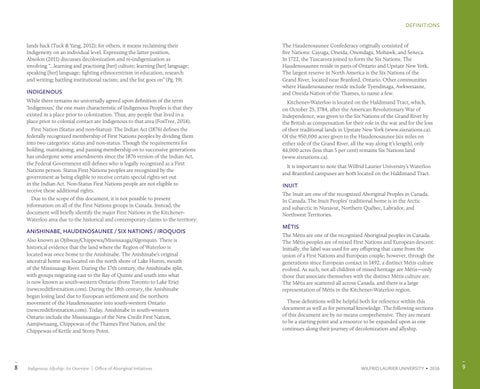 lands back (Tuck & Yang, 2012); for others, it means reclaiming their Indigeneity on an individual level. Expressing the latter position, Absolon (2011) discusses decolonization and re-indigenization as involving “…learning and practising [her] culture; learning [her] language; speaking [her] language; fighting ethnocentrism in education, research and writing; battling institutional racism; and the list goes on” (Pg. 19).

INDIGENOUS While there remains no universally agreed upon definition of the term ‘Indigenous,’ the one main characteristic of Indigenous Peoples is that they existed in a place prior to colonization. Thus, any people that lived in a place prior to colonial contact are Indigenous to that area (FoxTree, 2014). First Nation (Status and non-Status): The Indian Act (1876) defines the federally recognized membership of First Nations peoples by dividing them into two categories: status and non-status. Though the requirements for holding, maintaining, and passing membership on to successive generations has undergone some amendments since the 1876 version of the Indian Act, the Federal Government still defines who is legally recognized as a First Nations person. Status First Nations peoples are recognized by the government as being eligible to receive certain special rights set out in the Indian Act. Non-Status First Nations people are not eligible to receive these additional rights. Due to the scope of this document, it is not possible to present information on all of the First Nations groups in Canada. Instead, the document will briefly identify the major First Nations in the KitchenerWaterloo area due to the historical and contemporary claims to the territory:

ANISHINABE, HAUDENOSAUNEE / SIX NATIONS / IROQUOIS Also known as Ojibway/Chippewa/Mississauga/Algonquin. There is historical evidence that the land where the Region of Waterloo is located was once home to the Anishinabe. The Anishinabe’s original ancestral home was located on the north shore of Lake Huron, mouth of the Mississaugi River. During the 17th century, the Anishinabe split, with groups migrating east to the Bay of Quinte and south into what is now known as south-western Ontario (from Toronto to Lake Erie) (newcreditfirstnation.com). During the 18th century, the Anishinabe began losing land due to European settlement and the northern movement of the Haudenosaunee into south-western Ontario (newcreditfirstnation.com). Today, Anishinabe in south-western Ontario include the Mississaugas of the New Credit First Nation, Aamjiwnaang, Chippewas of the Thames First Nation, and the Chippewas of Kettle and Stony Point.

The Haudenosaunee Confederacy originally consisted of five Nations: Cayuga, Oneida, Onondaga, Mohawk, and Seneca. In 1722, the Tuscarora joined to form the Six Nations. The Haudenosaunee reside in parts of Ontario and Upstate New York. The largest reserve in North America is the Six Nations of the Grand River, located near Branford, Ontario. Other communities where Haudenosaunee reside include Tyendinaga, Awkwesasne, and Oneida Nation of the Thames, to name a few. Kitchener-Waterloo is located on the Haldimand Tract, which, on October 25, 1784, after the American Revolutionary War of Independence, was given to the Six Nations of the Grand River by the British as compensation for their role in the war and for the loss of their traditional lands in Upstate New York (www.sixnations.ca). Of the 950,000 acres given to the Haudenosaunee (six miles on either side of the Grand River, all the way along it’s length), only 46,000 acres (less than 5 per cent) remains Six Nations land (www.sixnations.ca). It is important to note that Wilfrid Laurier University’s Waterloo and Brantford campuses are both located on the Haldimand Tract.

INUIT The Inuit are one of the recognized Aboriginal Peoples in Canada. In Canada, The Inuit Peoples’ traditional home is in the Arctic and subarctic in Nunavut, Northern Québec, Labrador, and Northwest Territories.

MÉTIS The Métis are one of the recognized Aboriginal peoples in Canada. The Métis peoples are of mixed First Nations and European descent. Initially, the label was used for any offspring that came from the union of a First Nations and European couple; however, through the generations since European contact in 1492, a distinct Métis culture evolved. As such, not all children of mixed heritage are Métis—only those that associate themselves with the distinct Métis culture are. The Métis are scattered all across Canada, and there is a large representation of Métis in the Kitchener-Waterloo region. These definitions will be helpful both for reference within this document as well as for personal knowledge. The following sections of this document are by no means comprehensive. They are meant to be a starting point and a resource to be expanded upon as one continues along their journey of decolonization and allyship. 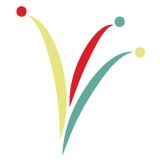