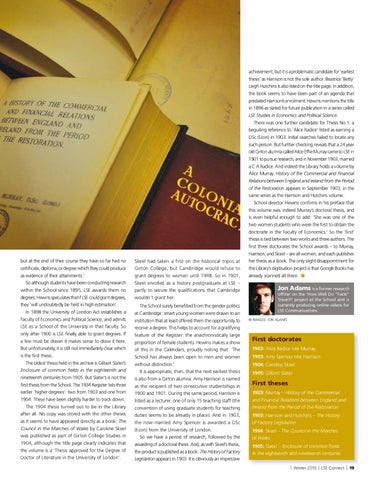 but at the end of their course they have so far had no certificate, diploma, or degree which they could produce as evidence of their attainments.’ So although students have been conducting research within the School since 1895, LSE awards them no degrees. Hewins speculates that if LSE could grant degrees, they ‘will undoubtedly be held in high estimation’. In 1898 the University of London Act establishes a Faculty of Economics and Political Science, and admits LSE as a School of the University in that faculty. So only after 1900 is LSE finally able to grant degrees. If a line must be drawn it makes sense to draw it here. But unfortunately, it is still not immediately clear which is the first thesis. The oldest thesis held in the archive is Gilbert Slater’s Enclosure of common fields in the eighteenth and nineteenth centuries from 1905. But Slater’s is not the first thesis from the School. The 1934 Register lists three earlier ‘higher degrees’: two from 1903 and one from 1904. These have been slightly harder to track down. The 1904 thesis turned out to be in the Library after all. No copy was stored with the other theses as it seems to have appeared directly as a book: The Council in the Marches of Wales by Caroline Skeel was published as part of Girton College Studies in 1904, although the title page clearly indicates that the volume is a ‘Thesis approved for the Degree of Doctor of Literature in the University of London’.

Skeel had taken a first on the historical tripos at Girton College, but Cambridge would refuse to grant degrees to women until 1948. So in 1901, Skeel enrolled as a history postgraduate at LSE – partly to secure the qualifications that Cambridge wouldn’t grant her. The School surely benefited from the gender politics at Cambridge: smart young women were drawn to an institution that at least offered them the opportunity to receive a degree. This helps to account for a gratifying feature of the Register: the anachronistically large proportion of female students. Hewins makes a show of this in the Calendars, proudly noting that: ‘The School has always been open to men and women without distinction.’ It is appropriate, then, that the next earliest thesis is also from a Girton alumna: Amy Harrison is named as the recipient of two consecutive studentships in 1900 and 1901. During this same period, Harrison is listed as a lecturer, one of only 15 teaching staff (the convention of using graduate students for teaching duties seems to be already in place). And in 1903, the now-married Amy Spencer is awarded a DSc (Econ) from the University of London. So we have a period of research, followed by the awarding of a doctoral thesis. And, as with Skeel’s thesis, the product is published as a book: The History of Factory Legislation appears in 1903. It is obviously an impressive

achievement, but it is a problematic candidate for ‘earliest thesis’ as Harrison is not the sole author: Beatrice ‘Betty’ Leigh Hutchins is also listed on the title page. In addition, the book seems to have been part of an agenda that predated Harrison’s enrolment: Hewins mentions the title in 1896 as slated for future publication in a series called LSE Studies in Economics and Political Science. There was one further candidate for Thesis No.1: a beguiling reference to ‘Alice Radice’ listed as earning a DSc (Econ) in 1903. Initial searches failed to locate any such person. But further checking reveals that a 24 year old Girton alumna called Alice Effie Murray came to LSE in 1901 to pursue research, and in November 1903, married a C A Radice. And indeed the Library holds a volume by Alice Murray. History of the Commercial and Financial Relations between England and Ireland from the Period of the Restoration appears in September 1903, in the same series as the Harrison and Hutchins volume. School director Hewins confirms in his preface that this volume was indeed Murray’s doctoral thesis, and is even helpful enough to add: ‘She was one of the two women students who were the first to obtain the doctorate in the Faculty of Economics.’ So the ‘first’ thesis is tied between two works and three authors. The first three doctorates the School awards – to Murray, Harrison, and Skeel – are all women, and each publishes her thesis as a book. The only slight disappointment for the Library’s digitisation project is that Google Books has already scanned all three. n

Jon Adams is a former research

officer on the ‘How Well Do “Facts” Travel?’ project at the School and is currently producing online videos for LSE Communications. © IMAGES: JON ADAMS

First theses 1903: Murray – History of the Commercial and Financial Relations between England and Ireland from the Period of the Restoration 1903: Harrison and Hutchins – The History of Factory Legislation 1904: Skeel – The Council in the Marches of Wales 1905: Slater – Enclosure of common fields in the eighteenth and nineteenth centuries

Magazine for alumni of the London School of Economics and Political Science. Volume 22, Number 2, Winter 2010 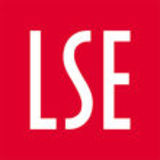