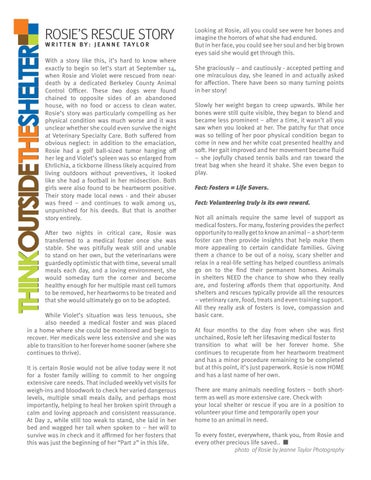 ROSIE’S RESCUE STORY WRIT TEN BY: JEANNE TAYLOR With a story like this, it’s hard to know where exactly to begin so let’s start at September 14, when Rosie and Violet were rescued from neardeath by a dedicated Berkeley County Animal Control Officer. These two dogs were found chained to opposite sides of an abandoned house, with no food or access to clean water. Rosie’s story was particularly compelling as her physical condition was much worse and it was unclear whether she could even survive the night at Veterinary Specialty Care. Both suffered from obvious neglect: in addition to the emaciation, Rosie had a golf ball-sized tumor hanging off her leg and Violet’s spleen was so enlarged from Ehrlichia, a tickborne illness likely acquired from living outdoors without preventives, it looked like she had a football in her midsection. Both girls were also found to be heartworm positive. Their story made local news - and their abuser was freed – and continues to walk among us, unpunished for his deeds. But that is another story entirely. After two nights in critical care, Rosie was transferred to a medical foster once she was stable. She was pitifully weak still and unable to stand on her own, but the veterinarians were guardedly optimistic that with time, several small meals each day, and a loving environment, she would someday turn the corner and become healthy enough for her multiple mast cell tumors to be removed, her heartworms to be treated and that she would ultimately go on to be adopted. While Violet’s situation was less tenuous, she also needed a medical foster and was placed in a home where she could be monitored and begin to recover. Her medicals were less extensive and she was able to transition to her forever home sooner (where she continues to thrive). It is certain Rosie would not be alive today were it not for a foster family willing to commit to her ongoing extensive care needs. That included weekly vet visits for weigh-ins and bloodwork to check her varied dangerous levels, multiple small meals daily, and perhaps most importantly, helping to heal her broken spirit through a calm and loving approach and consistent reassurance. At Day 2, while still too weak to stand, she laid in her bed and wagged her tail when spoken to – her will to survive was in check and it affirmed for her fosters that this was just the beginning of her “Part 2” in this life.

Looking at Rosie, all you could see were her bones and imagine the horrors of what she had endured. But in her face, you could see her soul and her big brown eyes said she would get through this. She graciously – and cautiously - accepted petting and one miraculous day, she leaned in and actually asked for affection. There have been so many turning points in her story! Slowly her weight began to creep upwards. While her bones were still quite visible, they began to blend and became less prominent – after a time, it wasn’t all you saw when you looked at her. The patchy fur that once was so telling of her poor physical condition began to come in new and her white coat presented healthy and soft. Her gait improved and her movement became fluid – she joyfully chased tennis balls and ran toward the treat bag when she heard it shake. She even began to play. Fact: Fosters = Life Savers. Fact: Volunteering truly is its own reward. Not all animals require the same level of support as medical fosters. For many, fostering provides the perfect opportunity to really get to know an animal – a short-term foster can then provide insights that help make them more appealing to certain candidate families. Giving them a chance to be out of a noisy, scary shelter and relax in a real-life setting has helped countless animals go on to the find their permanent homes. Animals in shelters NEED the chance to show who they really are, and fostering affords them that opportunity. And shelters and rescues typically provide all the resources – veterinary care, food, treats and even training support. All they really ask of fosters is love, compassion and basic care. At four months to the day from when she was first unchained, Rosie left her lifesaving medical foster to transition to what will be her forever home. She continues to recuperate from her heartworm treatment and has a minor procedure remaining to be completed but at this point, it’s just paperwork. Rosie is now HOME and has a last name of her own. There are many animals needing fosters – both shortterm as well as more extensive care. Check with your local shelter or rescue if you are in a position to volunteer your time and temporarily open your home to an animal in need. To every foster, everywhere, thank you, from Rosie and every other precious life saved.. ■ photo of Rosie by Jeanne Taylor Photography

If you were excited about the announcement of Sex and the City return you will love Maddie and the City in the February issue of Lowcountry Dog Magazine plus -Canine Social Media Influencers -5 Training Tips that Will Improve Your Relationship with Your Dog -Charleston: Parasite Grand Central Station 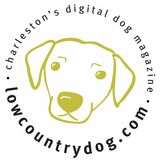 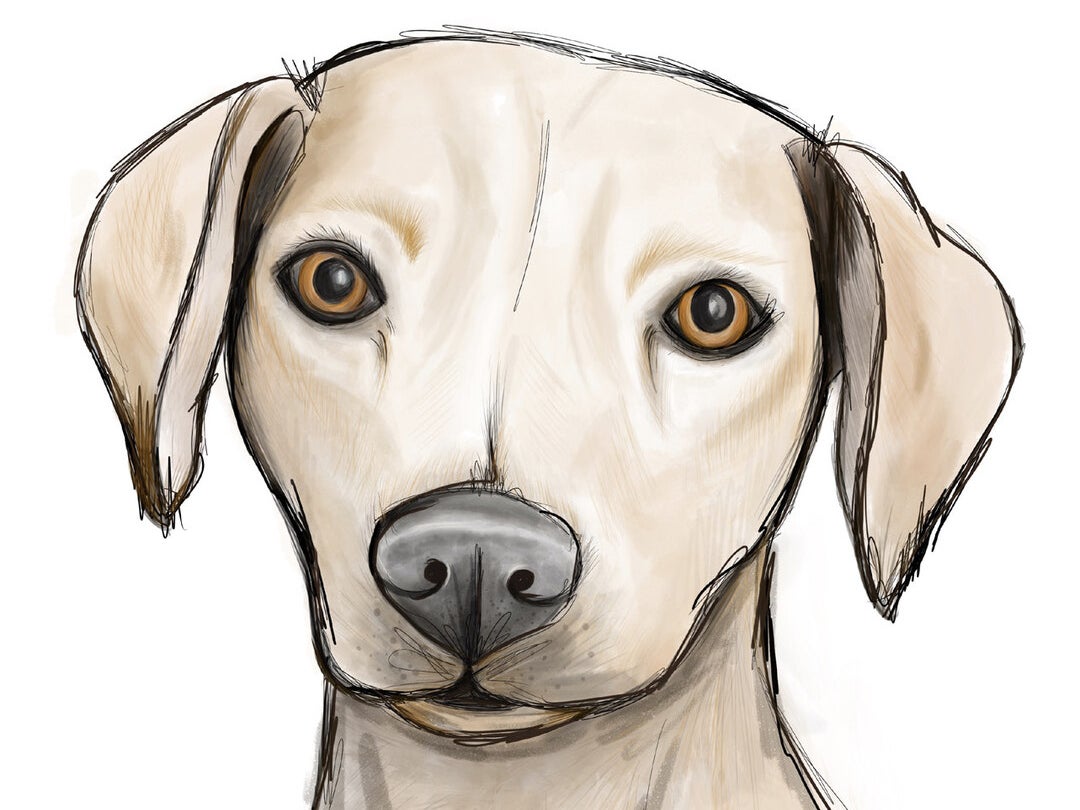 Well if you are reading this, you survived 2020. A year that brought us a global pandemic that has affected our daily lives and cost over 2 million their lives. While we count ourselves lucky in the midst of this pandemic, it certainly has changed our business. 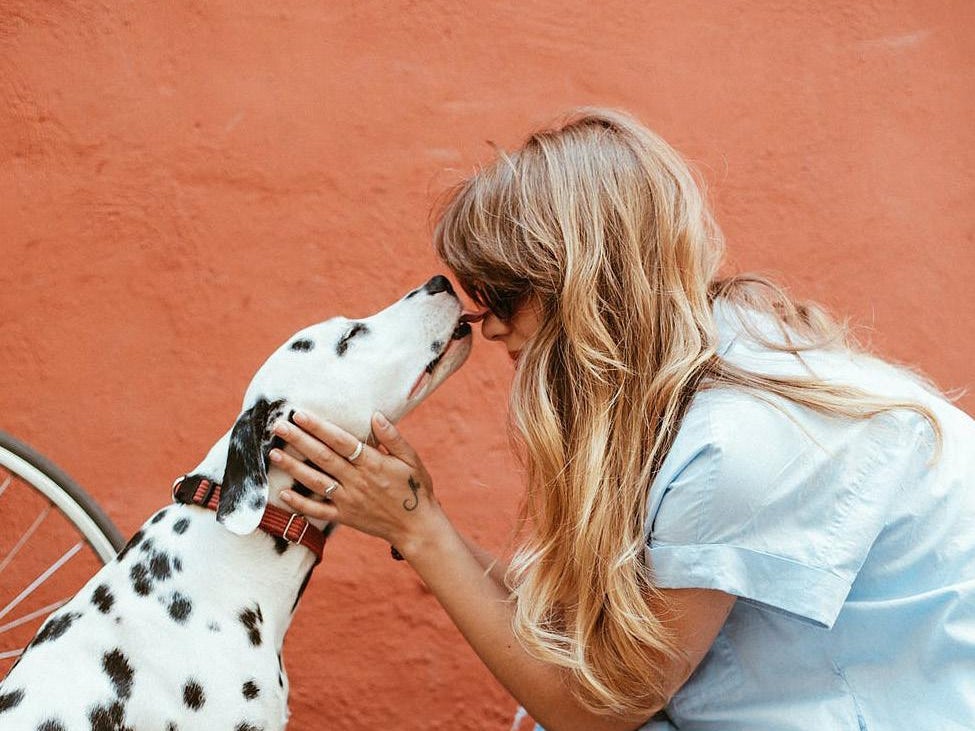 5 Training Tips that Will Improve Your Relationship with Your Dog

It’s our job as dog owners to show our dogs what good dog behavior is in a way that they can understand. 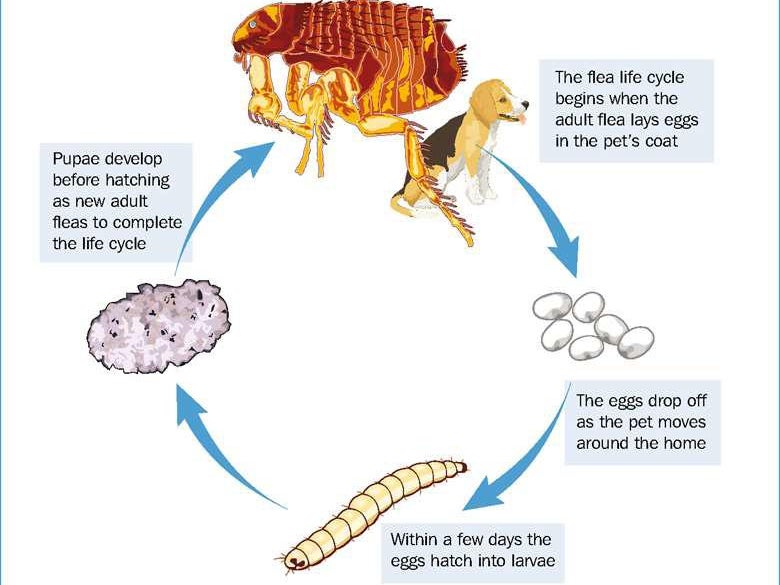 Dogs are naturally susceptible to both internal and external parasites in our area of the country and protection requires year-round vigilance. Our mild winter weather simply does not reach the cold temperatures required to cease parasite life cycles, so this means our pets are at risk year-round and not just in warm months. 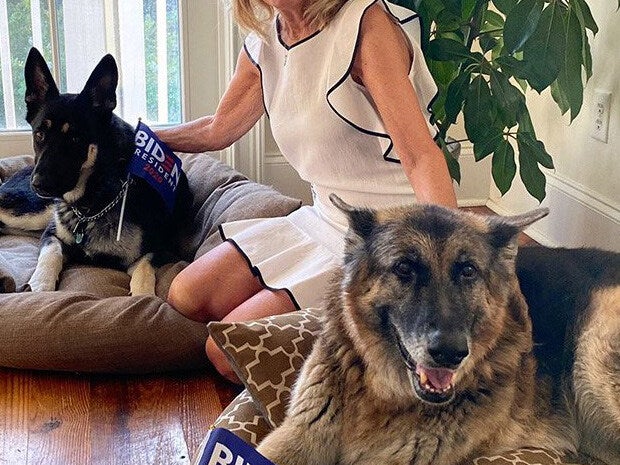 The White House Now has a Rescue Dog!

Whatever your political leanings are, we all love dogs or you wouldn’t be reading this magazine. Well, with the new administration moving into the White House, we have 2 new first dogs! 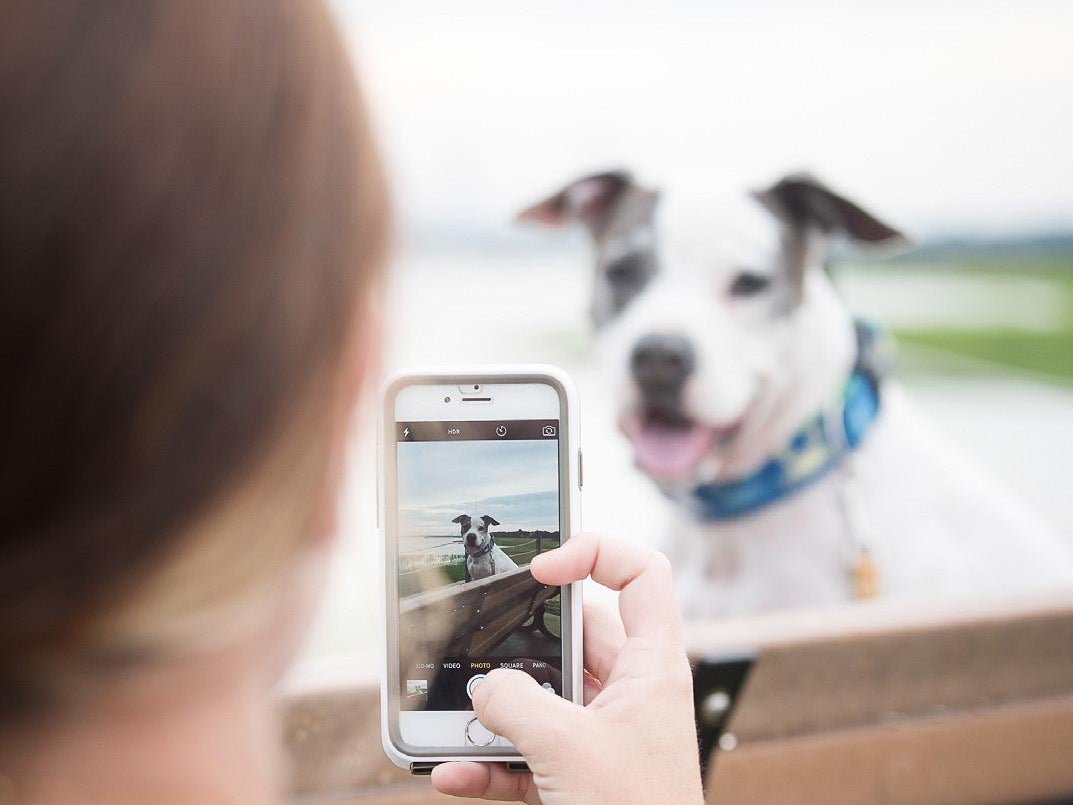 The social media craze is a real thing; raise your hand if your screen time has gotten higher because of last year! You may find yourself glued to Tik-Tok and Pinterest for hours, or perhaps find yourself checking out social media pages with lots of followers and end up following them because they appeal to your interests. 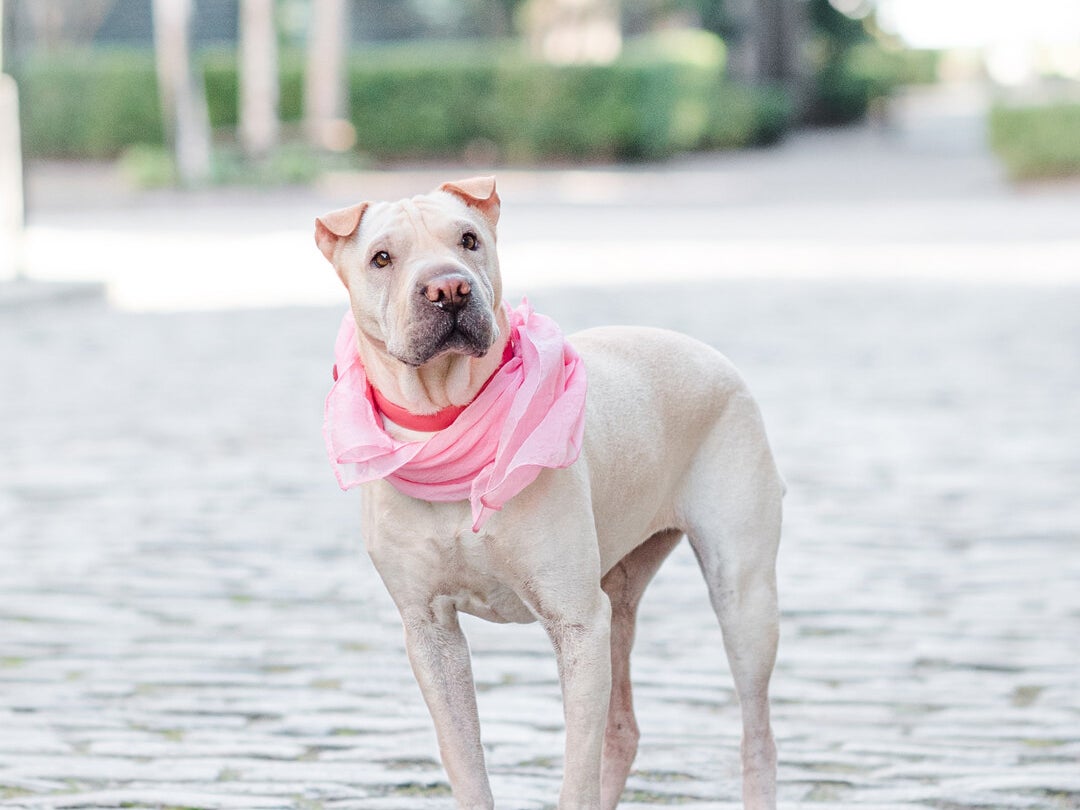 Maddy and the City!

Move over Carrie Bradshaw...I am Madelynn but everyone calls me Maddy. I am a five-year-old Shar-pei with no bae. I am 100% natural minus the two eye lifts I had back in the day. Never had botox. Lived in three different cities. Failed out of dog training school because they wouldn’t let me take a pee break and I am single and ready to mingle! 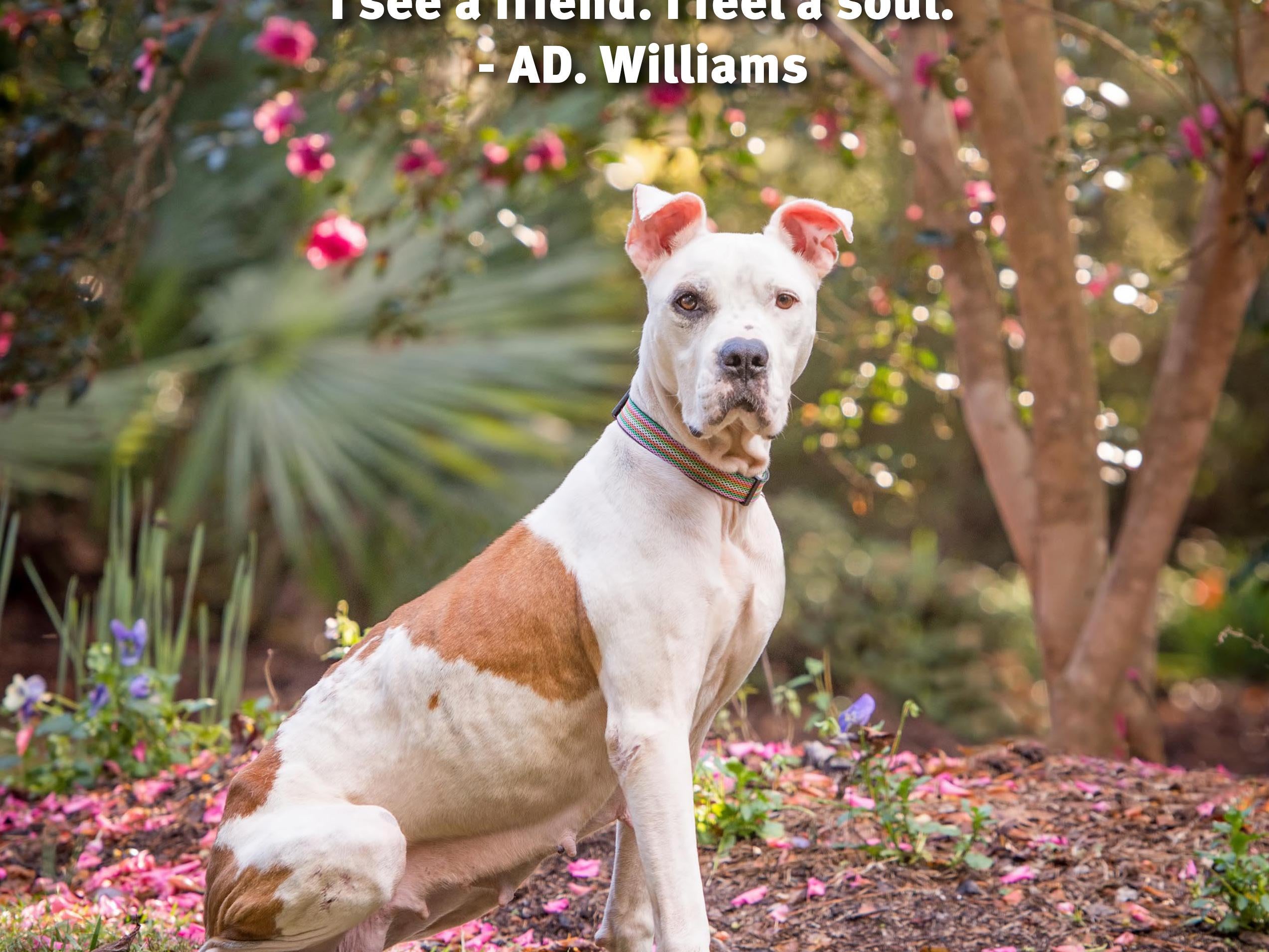 With a story like this, it’s hard to know where exactly to begin so let’s start at September 14, when Rosie and Violet were rescued from near-death by a dedicated Berkeley County Animal Control Officer.