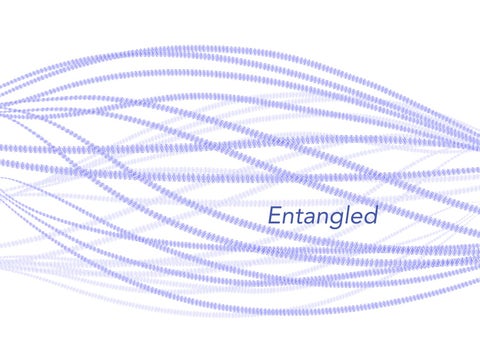 Cause and effect. Karma. The Three Fates of Greek mythology. The Chinese belief of the Red Threads of Fate. These are what came to mind when reading up about Quantum Entanglement and Superposition. Drawing inspiration from these themes, Entangled is a visual representation of the inter-connectivity of our lives. Just as how one personâ&amp;#x20AC;&amp;#x2122;s action can affect the path their own lives take, it can also affect the lives of other people surrounding them. Everything is entangled, and what one does will affect the other.

A physical phenomenon which occurs when pairs or groups of particles are generated or interact in ways such that the quantum state of each particle cannot be described independently of the state of the other(s), even when separated at a large distance. Before the project even started, I knew I did not want to work purely with scientific concepts. I wanted to link the concepts from Quantum Theory to other subjects. The idea to link Quantum Entanglement with the concept of cause and effect, which then later lead to linking it with the idea of fate and karma came after more research was done on the topic.

In terms of the art style, I wanted to go with something simple and elegant. For the hands, I looked at line drawing of hands. Most of the ones that I really liked turned out to be tattoo designs. As for the scissors, I searched for images of embroidery scissors and found an image of this vintage scissors in the shape of a crane. I thought this was really interesting and decided to adopt it as one of the motifs.

I more or less had already some images in my head when I came up with the concept for this piece. I knew I would be working with a lot of lines and/or strings. I was also inspired by some information that I found in my research and these eventually ended up as motifs for my banner, such as the spindle and the scissors, inspired by Ancient Greekâ&amp;#x20AC;&amp;#x2122;s The Three Fates. I also decided use DNA strands as part of my motifs as I wanted to have a motif that rerepresents life. The DNA strands then became my strings, and from the Ancient Greekâ&amp;#x20AC;&amp;#x2122;s Three Fates, came the hands, the spindle and the scissors. I also knew that I did not want a lot of colour in my illustrations. If anything, I wanted the piece to be serene and give viewers a sense of peace when they look at it.

I thought the motifs would look nice on fabrics, so maybe cushion covers or bed sheets etc. This is how the motifs could be applied onto a product.