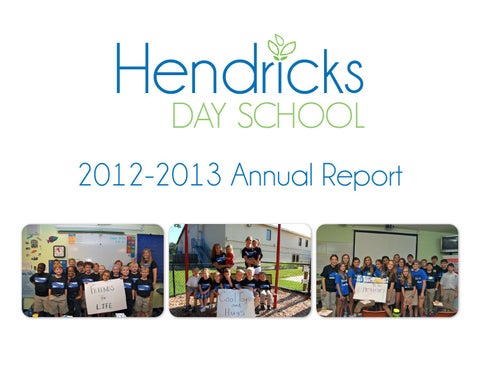 Head of School Message Dear Hendricks Family, Every gift you make to Hendricks, be it to The Hendricks Fund, the Boosterthon or the Sally D. Lott Scholarship Fund, is an investment in our children and in future generations of children. Since our founding in 1970, Hendricks has promoted excellence, focusing on our enthusiastic learners and our dedicated teachers. The core values of our school, now clearly articulated, have stood the test of time. Our Hendricks family demonstrates love for the students and each other, is committed to benefitting and participating in our community, and is dedicated to helping meet each student’s potential and promise. We recognize the individuality of each student and support the discovery process that is such an exciting part of learning. Hendricks truly is the place to be! We are thrilled to share that the 2012-2013 Annual Fund earned $150,000! That is a monumental feat for any organization, but in this time of economic turmoil, it demonstrates the love and commitment our Hendricks family has for our children and the school. This Annual Giving Report details and celebrates our community’s loyalty for Hendricks. As you turn the pages of the Hendricks 2012-13 Annual Report, you will see that the past year was bursting with creativity, inspiration and growth. Because of you, generations of young learners continue to thrive in an atmosphere that fosters high academic standards, instills a love of learning, and provides a solid foundation for the future. A simple “thank you” may not seem like much in comparison with your unwavering support and generosity: but it truly is a heartfelt “thank you” from me, the children, our faculty and staff, and our Board of Trustees. Fondly, Linda !M. Johnson, Ed.D. Head of School

Board Chair Message Dear Friends, It is such a privilege to serve the Hendricks community, and I am sure my colleagues on the Board of Trustees share the same sense of privilege in supporting our wonderful school. We have worked hard over the past year and are proud of our efforts, especially in strategic planning. I am delighted to present the Hendricks Day School Annual Report for 2012-2013, which highlights our community, special events and all of you that have contributed to make our school even better. Our strategic planning committee demonstrates that we function as a team at Hendricks. As board members, parents, faculty and staff we have worked seamlessly together. No one stands alone at Hendricks, and great things – the kind of things that last and change lives - require this spirit of teamwork. This report reflects the commitment of the entire Hendricks family to demonstrate that we are truly “the place to be”. I thank all of you who give so much of your time, talent and financial support. We have so much for which to be grateful. With your help, we are able to provide the best possible academic experience, including excellent resources and encore classes, an excellent sports program and club options, as well as support the nurturing, family environment for which Hendricks is known. With your support, we are able to advance the mission of Hendricks Day School and touch the lives of our students. Sincerely,

Jeff Durfee, Chair, Board of Trustees

The Hendricks Fund 2012-2013 The Annual Report pays tribute to those who helped make the 2012-2013 school year at Hendricks "The Place to Be"! We offer our deepest appreciation to the Board of Trustees, teachers, staff, parents, grandparents and friends whose dedication and commitment to our school inspire us all. Together, we have laid the foundation for a future for which our students can only imagine.

Father/Daughter Dance The Hendricks Pom Squad hosted the 3rd Annual Father/ Daughter Dance! The young ladies of Hendricks Day School came out for a Party in Paris, a night of dancing with dads, uncles and grandfathers - lots of memories were made!

The Gathering The Gathering is a monthly student-led event that focuses on character, moral development and student achievement. Each month focuses on a Habit of Mind. Classes also take turns performing and presenting what they have been learning in their classrooms with integration from our resources. It is a time of reflection, bonding, learning, and growing together.

All year long, both the Blue & White teams compete for points by displaying outstanding behavior, being caught with character, etc. At the end of the year, we host our Blue/White competition with a Field Day! Games include sack races, relays, water balloon toss and more! Itâ&#x20AC;&#x2122;s a great way to celebrate our culture!

The Boosterthon Fun Run is a fun and healthy way to raise funds for schools. The faculty, staff and students of Hendricks participated in a two week Boosterthon fundraising event resulting in a fun day of physical activity, school-wide fellowship and tons of Hendricks school spirit! This event raised $18,000 for campus upgrades!

Celebrating Our Culture Field Trips Fourth through eighth grade students have the opportunity every year to participate in extended field trips. These field trips are designed to supplement the curriculum and also to encourage students to develop friendships and bond with one another. This year students traveled to Jekyll Island, Busch Gardens, the Florida Keys, North Carolina and Washington, DC!

Hendricks Middle School students partnered with the St. Johns Riverkeeper to help clean up a section of one of our city's most important resources, the St. Johns River. Students went to Blue Cypress Park to help pick up garbage and other waste. They earned community service hours and got a valuable life experience they will carry with them always.

Student Council Student Council held One Day Without Shoes in the Spring, an international awareness day started by TOMS shoes. Students at Hendricks went a full school day without shoes and learned about many illnesses and conditions that people can get from going without shoes. Following the event, students raised over $13,000 worth of shoes and clothing that was donated to children in need around the world!

Tab Collection Every year, the students, families, faculty and staff pop and collect tabs. The tabs are tallied and sent to the Ronald McDonald House where they are recycled to raise funds for their operating costs. We were able to collect 749,550 tabs - nice job Raiders!

Dear Hendricks Families, The Hendricks Day School Parent Teacher Organization (PTO) was busy providing “fun and fund” raising activities throughout the 2012-2013 school year. Even before School started, we were busy planning the Monster Bash. Our yearly evening of entertainment and fun for Hendricks families and friends raised over $10,000. From the duck pond to the dunking booth, there were activities for all ages. The Voices of Hendricks opened the festivities with a Halloween song and a Middle School dance ended the night. A decision was made to change our annual auction to two online events. Teacher Treasures were auctioned in the fall. Classroom Creations and baskets donated by each homeroom were auctioned in the spring, along with the ever popular reserved parking spaces. The Monster Bash and the Auction were the two main fundraising events this year, but the PTO was busy all year long providing support to Hendricks students, families and staff. Our hospitality volunteers have been busier than ever. We started our year off with an Ice Cream Social for new students and the Welcome Back Coffee to celebrate the start of school, and held several breakfasts and lunches for our incredible Hendricks faculty/staff. The Family Trivia Night and Bake-Off was entertaining and tasty! At the end of this year, we honored our Hendricks faculty and staff during Teacher Appreciation Week with an on campus breakfast and an off campus luncheon at Broadway Ristorante. Hendricks parents were also very busy! Every Friday, students were treated to sno cones or popcorn served by parent volunteers. Our fabulous homeroom parents planned class parties and organized the Superlative Dance. Volunteers helped with Picture Day and Vision Screening in the Library. Our campus-wide Spring Fling paired older classes with younger ones to hunt for eggs, play games and dance in the gym.

Through all of our fundraising and “fun” raising activities for the 2012-2013 school year, the PTO donated $22,000 to the school. The money was used for campus beautification, new interior signage and a new display case for art in the elementary wing.

The PTO has had an active, fun-filled year! Everyone has worked very hard to support the school and enhance the Hendricks experience for your children. Thank you for your support of PTO activities. Hendricks families make a difference! Amy Stapleton PTO President

Friends of Hendricks was formed to support the mission of Hendricks Day School through socialization, service to community and school support. Membership is open to all alumni, parents of alumni as well as local businesses affiliated with Hendricks Day School. The boardâ&#x20AC;&#x2122;s goal is to raise funds for the school and have fun doing so! This is a great way to stay connected with the many friends you have made through Hendricks whether you are an alumni or parent of an alumni. The groupâ&#x20AC;&#x2122;s fundraisers this year consisted of Fundraising for the Future clothing drive, Dinners-To-Go and a Holiday Dinner. Thanks to the generosity of our Hendricks community, we were able to provide three scholarships for Middle School field trips.

Hendricks Graduates “Great oaks from little acorns grow.” The potential that lies within each tiny acorn is huge, just as it is within each of us. Nature rewards the persistence and patience of the acorn by giving it the strength to grow into a powerful, mighty oak. By realizing your natural potential, you have achieved great results and continue to grow each day. When you believe in yourself, the sky’s the limit!

Congratulations to the Class of 2013!