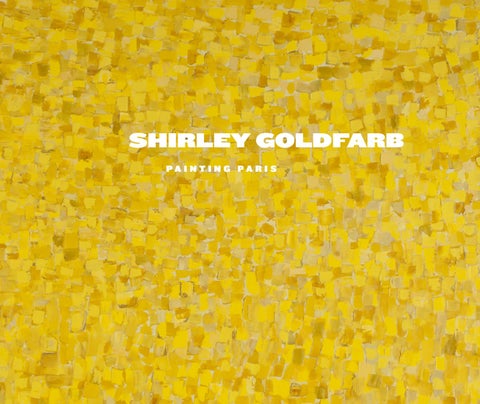 The knife places the paint, one color after another, like animal prints or musical notations. – Shirley Goldfarb’s diaries

To mention Shirley Goldfarb is to conjure an image of Paris, a city she loved deeply and called home for 26 years. Born into a conservative Jewish family in Altoona, Pennsylvania, she was mentored by a local rabbi and eventually garnered a scholarship to attend the Jewish Theological Seminary in New York. She never once looked back. Once in Manhattan, one of her instructors noted her artistic skills and suggested that she leave the Seminary and enroll at the Art Students League, where she ultimately enrolled in 1950. There she met fellow artist Gregory Masurovsky whom she married in 1953. Like many of their generation they soon moved to Paris, where they survived on the GI Bill. Goldfarb adopted a purely abstract style, breaking completely with the figurative Expressionism that had characterized her academic training in New York.

As the 1950s faded into the 1960s, she became closely associated with other American expatriates who flocked to the city in the aftermath of World War II, including Joan Mitchell and Sam Francis. Unlike the work of her peers, Goldfarbâ&amp;#x20AC;&amp;#x2122;s paintings absorbed a unique Parisian quality. She is often likened more closely to the Paris School ofTachisme that included Jean Paul Riopelle and Pierre Soulages

in their number. The French Impressionists, especially Monet, deeply moved her and she internalized their delicate palette. The influence of the city upon the artist cannot be overstated. Goldfarb recounted how the light and atmosphere of the city affected her: “I went through a revolution here. When I saw the light in Paris and, after seeing a Monet, I realized they were one and the same thing.” A chief influence, a selection of late Monet paintings could be easily viewed at the

nearby Musée de l’Orangerie with its collection of eight monumental water lilies paintings. Though this affinity is one she developed early, it is one that seemed to reassert itself throughout the remainder of her life. Shortly after her arrival, the L’Orangerie received the first of two major bequests of important Impressionist and Post Impressionist paintings. In the early 1970s the densely chorded knots of paint in her abstractions gave way to a careful, hazy array of painterly marks. The drama of composition in her earlier works was supplanted by the woozy power of all-over color. George Seurat’s influence is particularly pronounced in this development. Indeed, the carefully knifed grids of paint take their cues from pointillism. In the spirit of

her predecessor, Goldfarb has distilled the essence of the picture into an arrangement of color coordinates. These works abandon a centerline or obvious compositional motif in favor of the atmospheric power of Impressionism. Georges Seurat Study for La Grande Jatte, 1884, Courtesy The National Gallery, Washington D.C.

It is important to note the monumental scale of these paintings. Measuring over nine feet in length these works were made with careful, plodding insistence within the constrained confines of the tiny live-work studio she shared near Montparnasse with her husband and their son. The series of miniature works that she made throughout the 1960s and 1970s capture a similar infatuation with light and color, and provided a much needed respite from the intensive labor of making large works in the cramped family apartment. Her canvas Chartres, mirrors the stunning blues, yellows and deep burgundy reds of Chartres Cathedralâ&amp;#x20AC;&amp;#x2122;s thirteencentury stained glass windows. Famous as a dramatic ex-

ample of medieval stained glass, the church is emblematic of the storied architecture that pervades much of Paris. The luminous quality of her Yellow Painting #1 recalls the heavy

impasto surfaces of Vincent Van Gogh’s Sunflower paintings. His work from this series offers a poignant reflection on the fleeting, fragile nature of life. Similarly, the staccato marks of Shirley’s pallet knife lend a frenzied effect to the otherwise cheerful tones of her canvas. Her journals, which she could be seen writing in constantly, reveal an inner dialog fraught with self-doubt and turmoil. One cannot help but imagine she might have felt kinship in the tortured, romantic figure of Van Gogh.

Shirley was a fixture of the social milieu surrounding the many artists, poets and intellectuals who inhabited the cafés of Montparnasse and Saint-Germain-des-Prés. One can imagine Shirley herself as a modern counterpart to the flaneurs of impressionist era Paris. Ever the consummate socialite and dedicated bon vivant, she was always resplendent in her black wardrobe, oversized dark sunglasses and black makeup (her “war paint”), usually with her miniature Yorkshire terrier in tow. She could often be seen strolling the left bank, soaking in the scene at café terraces and watching for someone interesting to cross her path, sensitive to the moments of light promising to play out across the city’s luminous boulevards. n Howard Hurst, New York 2017

Published on the occasion of the exhibition "Shirley Goldfarb - Painting Paris" at Loretta Howard Gallery, spring 2017.