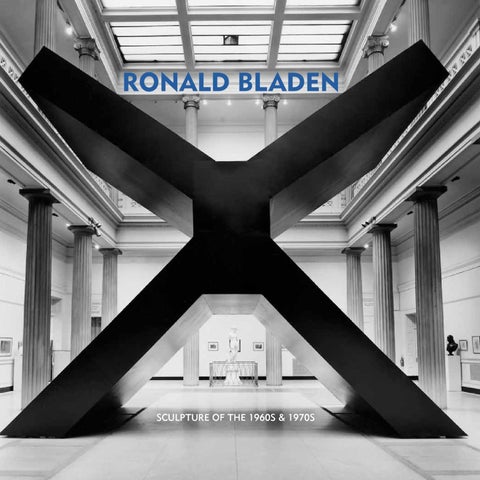 As a young man Ronald Bladen was a member of a group of anarcho-pacifist artists, writers

mands, he was the exemplary artist to a wide circle

etry.” He also added, “I desired something in the

of painters and sculptors.

and musicians, among them Kenneth Rexroth,

Prior to becoming a sculptor in the early 1960s,

Bladen has often been linked to Donald Judd

canvases, avant-garde at the time. Composed of

Minimalists. But he was very different. He rejected

developed then continued to inform his life and

their anti-romantic attitude and what they termed

space, they “brought me off the wall,” as he said.

“anti-anthropomorphism,” that is, their purging

Then, in 1960, he rejected organic forms as too

of any sign of the human body and its gestures.

are “intoxicated with the love of personal free-

commonplace and built a number of large plywood

Bladen’s romanticism and humanity are evident in

dom,” embracing above all “the autonomy of the

Individual.”1 He also wrote, “Only those are free

were elementary “letter” forms, for example, an

who are free from the values of the establishment.

inverted C or an L. His next move was to create

boid-like monoliths, each tilted so as to appear

And that’s what anarchism is all about.” Bladen

monumental Minimalist sculptures in the round.

precariously balanced, and painted black with the

rarely talked about his political beliefs, but he sub-

His intention in the work was, as he said, “to push

outer diagonal side sheathed in aluminum.

scribed to these axioms. An independent spirit who

abstract art a little bit further [past the prevailing

Three Elements was exhibited that year in

refused to bow to art world powers and their de-

open construction-sculpture] but not lose the po-

Primary Structures, a comprehensive survey of

ed space, sculpture as field, or as line—and devel-

works are based on the upward aspiring diagonal,

oped it in a spectacular manner. In Black Triangle

the top. Poising it on its vertex, he overturned the

usual expectations of how the sculpture ought to

sit. Indeed, the form calls as much attention to

preparing to soar. His intention in these sculptures,

the space it activates as to its massiveness. The

which is evident even in the small models, was, as

he said, “to reach that area of excitement belong-

ing to natural phenomena such as if a gigantic

of Art in which it was installed. In Black Minimal Art, at the Jewish Museum. The exhibi-

in Christian art—a trajectory that is

Elements stood out; it literally made the art world

look up. Di Suvero singled out Bladen’s work as

“the one great piece in the show. It expands our

mal on the outside but internally they

idea of scale and changes our knowledge of space.

are complex. His simple forms have an

It is radiant.”3 Di Suvero was right. Bladen’s sculp-

ture had an astonishing presence, which, as Alex

whose construction is seen in the struc-

If Three Elements was Minimalist in appear-

ance, it was anything but anti-romantic and anti-

he devoted so much of his time and

anthropomorphic in spirit. The diagonal of the gi-

energy building frameworks that were

ant volumes is reminiscent of a human gesture,

not only invisible but were in fact struc-

at once epic and grand, like the backward lean of

turally unnecessary. It may be that he

thought that his forms had to be found

or bowing. The three forms can also be viewed as

in the process of artistic-making, that is

a grand procession—anthropomorphic menhirs on

earned, a carryover from his Abstract

Three Elements was one of a number of ma-

Much as Bladen was occupied with

jestic, elemental pieces that made the art world

volume, he was also absorbed by light.

pay attention. In each, Bladen took a new spatial

In different pieces, he used reflective

idea—such as a unitary mass, a volume in extend-

lacquers, aluminum coating, semi-gloss blacks and metal skins. Indeed, from 1982 to 1988, the year of his death at the age of

wave poised before it makes its fall. . . . The drama

69, light became the essential “form” of a series

is best described as awesome or breathtaking.”4

of pieces. In these sculptures, elaborate painted

wood frameworks are the “substructures” for

its range in fresh and dramatic directions.

curved, polished aluminum sheets that trap light as they reflect it, the reflections seeming to signal cosmic space with earthly luminescence. At the same time that Bladen was constructing his light pieces he was creating small works that had been or might have become models for huge pieces had he lived. But in their own right, they are fully resolved works. Bladen invented a rich variety of volumes and shapes. Many of these

occasion of the exhibition

Beat Culture and the New America:

traveling to: The Walker Art Center,

Art in Space: Some Turning Points, The

1996 The San Francisco School of Abstract

1975 The Martha Jackson Collection at the

from the Museum of Modern Art,

1986 Sculpture on the Wall, The Aldrich

page 1: Ronald Bladen at The Walker

American Sculpture of the Sixties, Los

Art Gallery, The University of North

This catalogue published on the

back cover: Ronald Bladen beside museum staff during the construction of X, 1967. Scale as Content, The Corcoran Gallery of Art, Washington DC, 1967.