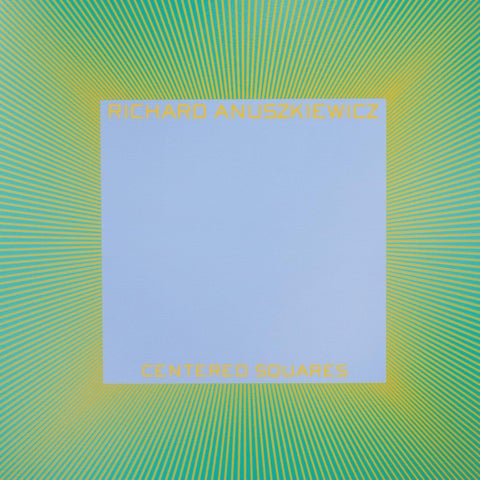 Richard Anuszkiewicz in his studio, 2016

RICHARD ANUSZKIEWICZ: CENTERED SQUARES This essay was first published in 1979 by the Alex Rosenberg Gallery.

Richard Anuszkiewicz’s new painting series, CENTERED SQUARE, is part of a profound, ongoing exploration of color that has characterized the work of this artist for more than twenty years. His long-term development has favored refinement, subtlety, directness, and simplicity of means – a combination of qualities that in Anuszkiewicz’s case has produced for the viewer not only perceptual insights unavailable elsewhere in contemporary art but rich increments of feeling. Anuszkiewicz’s early public successes involved works in complementary colors – for instance, in red and green. The visual energy of these early works was compelling and, for some of their audience, disturbing. These paintings commanded our attention according to their own laws; they addressed fundamental mechanisms of seeing. But also they went beyond intelligence or analytics to engage emotions. William C. Seitz, the distinguished art historian and organizer of the landmark exhibition, THE RESPONSIVE EYE, (Museum of Modern Art, 1965) recognized Anuszkiewicz’s preeminence among his contemporaries as an “optical” artist in color, the art of “…sharp-edged and flatly painted shapes, colors, and lines “that “if skillfully controlled, can animate an observer’s perception even against his will and bring about experiences of motion, light, deformation, depth, and many other effects for which the painting is only a stimulant.” (Seitz, THE NEW PERCEPTUAL ART, Vogue, February 1965). There were similar appreciations of Anuszkiewicz’s achievement of the period from commentators as diverse as Alfred H. Barr and Harold

Rosenberg. But the result was an unfortunate distortion of emphasis in regard to the artist’s aim, one that has to some degree persisted. Mere opticality was never the interest of this artist; perceptual effects for him have always been incidental to his exploration of color and not the other way round. Neither has Anuszkiewicz been what we might call a geometric artist, someone concerned with the dynamic interrelation of straight-edged shapes. His choice of vehicle is at most temperamental. In a conversation with the present writer (1975), Anuszkiewicz said, “…It’s the color performance that determines the form. Color performance and form are one. It’s not a matter of coloring a geometric pattern or scheme. My paintings have a color atmosphere or color climate, a particular feeling, because I work in families or groups of color. You’re seeing a gestalt, a totality. You see systems, groups of colors that function to create a total environment. I work for that.” The fact is Anuszkiewicz has contributed to our understanding and pleasure in color as have few artists of our time. The seriousness, intelligence, information and passion conveyed by his work is in no way inferior to that of the best of the color-field painters; and Anuszkiewicz’s paintings are in many instances superior in facture, beautifully and durably painted. Where they differ is in being brilliantly conceptualized, in being seen in the mind of the artist, in all their glowing life before brush goes to canvas. They are not works of impulse or spontaneity, and they don’t take advantage of accidents or depend upon editing for their effects. Their expressiveness flows directly from their internal logic, from the artist having chosen his subject matter and materials in right relation and in his not having stumbled upon them. Emotion is a constituent of order. Anuszkiewicz’s work at its best has an appeal analogous to that of classical architecture. In both surpassing aesthetic experience and variety develop mysteriously from simple principles.

The present series, CENTERED SQUARE, developed concurrently with Anuszkiewicz’s first etchings, which are still in preparation. The paintings each involve three colors, in essence a field color, the centered square, and the square’s perimeter of radiating lines. In Albers’ famous series, HOMAGE TO THE SQUARE, the square was never centered, three colors or four interact but only two touch. In Anuszkiewicz’s series, the central square is always half the total area and three colors interact and three touch. The work of the young artist relates to that of his master and teacher most closely through a shared understating of color as the dynamic elements in painting, and the knowledge, for instance, that quantity and position of hue contribute as much to the life of the painting as any absolute chromatic differences. If we think of the CENTERED SQUARE as conceived by Anuszkiewicz as a kind of format, we will have somewhat missed the point of the paintings; for this painter’s architecture and color are indivisible. The square is not the issue, rather the issue is how color creates the square and the kind of square the color creates in its environment of line and field. These paintings have to do with three kinds of space, three sorts of forms, as these are established by color. This admirable series delivers experiences that are distinct from one another; the sense of space, light, weight, energy, and presence shifts from painting to painting. Some of these works seem to float; some seen immanent, indwelling; some advance upon the viewer. And the paintings project a range of feeling intrinsic to their visual variety. But the marvel of the many is in each one. Gene Baro

Published on the occasion of the 2016 exhibition "Richard Anuszkiewicz - Centered Squares" at Loretta Howard Gallery.