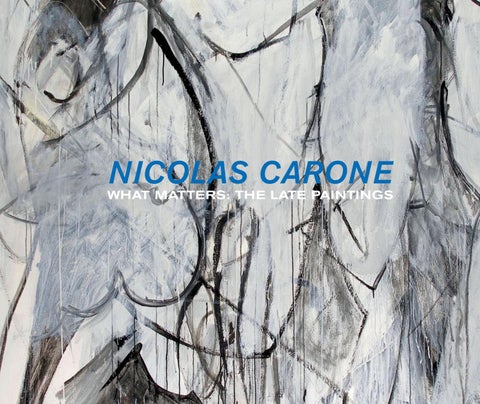 WHAT MATTERS: THE LATE PAINTINGS

Nick Carone: Painter, Friend, Teacher Barbara Rose Sitting in a café in Todi in Umbria, Italy, hiding behind a newspaper, I heard a booming voice calling me across the piazza “Babra Stella, Babra Stella”. It could only have been one person, who was also hiding out from the commercial mall New York had become. I recognized the voice. “Carone” I shouted back, “What are you doing here?” Nick, whom I had known for years as a New York School veteran, came over and ordered an expresso and started talking. Actually I never remembered Nick stopping talking. He had always been a teacher, highly respected by the younger artists and writers of my generation as the close friend of both de Kooning and Pollock, whom he had followed out to East Hampton once they decided to leave the city for the country. Nick was part of the Italo American group of Abstract Expressionists that included Marca-Relli, Cavalon, and actor Robert di Niro’s father, also named Robert di Niro. These artists including Nick never forgot their ancestors the great Renaissnce and Baroque painters in Italy. Although associated with the postwar movement of Abstract Expressionism in New York, Carone retained the classical training he received at the National Academy of Design in New York where he learned to draw the figure. He passed on this knowledge to his students at the New York Studio School he helped found. After a phase of abstraction in the 1950s and early 60s — as in Untitled (1958), Carone often introduced figures into his compositions. Carone’s paintings combine the freedom of automatic drawing introduced by the Surrealists with the constructivist geometry frequently practiced by the artists who worked on the WPA public art projects. Carone had probably the most extensive training of any New York School painter, studying at the Art Students League, Hans Hofmann School of Fine Arts, and the Rome Academy where he won the Prix de Rome in 1941.

After returning to the United States, he helped organize the famous Ninth Street Exhibition that introduced Abstract Expressionism in 1951. As the leading teacher of the next generation of painters educated in the Hofmannâ&amp;#x20AC;&amp;#x2122;s push-pull method at the Studio School, Carone was much respected, both by students and friends like de Kooning and Pollock once he moved from the city to the Springs in East Hampton where they lived and worked. When I ran into him in Todi, he had opened his International School of Art in nearby Montecastello del Vibio. Among his students were Phong Bui, a Vietnamese born artists who founded The Brooklyn Rail and Roberto Caracciolo. Don Kimes, who became director of the Studio School had also been Nickâ&amp;#x20AC;&amp;#x2122;s devoted student. We often went to visit Nick, admire his paintings and drawings and especially his mysterious sculptured stone heads. He transferred his enthusiasm for the masters and physical energy to his uncompromised paintings as well as his insistence that art was a profession rooted in tradition and not a game seeking celebrity. Nickâ&amp;#x20AC;&amp;#x2122;s work lasts because of his great talent but also because of his conviction that painting is a fine art based on both study and skill. His final paintings, done when he was well into his seventies and eighties, combine painting and drawing in dance-like movements made by the hand but based on physical energy and incorporating chance as part of the excitement. Paint is applied with both a wet and dry brush, in movements that are both hand and body, resulting in thick and thin brushwork. There is variety in these movements that never settles down into predictable or repeated patterns. Though Nick is gone forever, they remain permanent signs of life. n

I first interviewed Nicolas Carone in November 2006 when he lived at the Westbeth Artist Housing building in the West Village. He was in the sunset of an illustrious and productive career which included a Prix de Rome, the Andrew Carnegie Prize from the National Academy Museum, dozens of exhibitions including at the MoMA, the Whitney Museum of American Art, and the Tate Modern in London. We spent hours at a local diner talking jazz, poetry and Jackson Pollock. I listened as Nick reminisced about his days in East Hampton where he, Pollock, Conrad Marca-Relli and Willem de Kooning experimented with unusual pigments, oils, enamel and heavy lead-based paints found in the nearby shipyards. “We aimed for results,” Nick said. Then he poured a few drops of milk into his tea and slowly stirred it with a spoon. “See the beautiful shapes, the images emerging and pulling away?” I looked into the cup and told him I saw a dragon, then a flower. “Yes, remember, when you’re doing paintings, your imagination is working,” Nick said. “The painter goes into a dimension in the mind.” Later, on our way to his studio, Nick stopped to look at some stains on the sidewalk – stains made by two leashed terriers that were tinkling on a fire hydrant. “How’s that for dragons and flowers,” Nick said, both of us laughing. Then I asked him how an artist best goes about translating what he sees in nature and his environment – like the dragons in the teacup, or the dogs on the street. “Don’t be fooled by technique or paint quality. Fuck it! It’s the imagery that goes on. It’s metaphoric

and it’s poetry in a jazz sense. It’s symbolic and it’s on another dimension. It’s not an order like Picasso but it’s another dimension – the rhythm of mass. It’s rhythm,” Nick implored. “Rhythm!” We entered Nick’s studio and I immediately noticed a large canvas on an easel – blacks, whites and greys naturally bleeding into and out of each other. “I’m working with acrylics now,” Nick said. “Waterbased pigments can be manipulated much easier than oil,” he would later tell me. “But it forces me to accept the results; to fail a few times if necessary, in order to achieve one good result.” He pulled out another black and white canvas. “That’s made with chalk and acrylic,” Nick said. “Chalk?” I asked. “Yes, run your hand across it.” I hesitated before Nick reassured me. “Don’t worry, it’s unfinished,” he said. I gently slid my hand across the painting, revealing a fine layer of white chalk dust on the inside of my palm. Then I asked Nick about the large blue sheet rolled up in the corner. “That’s a tarpaulin,” he said. “I’ll use that for something. Something big.” I tried to imagine what a painting would look like on such a surface when Nick pointed to another painting, stretched and mounted. “That’s also a tarpaulin,” he said. He tapped the surface which sounded like a bongo drum. “Tarpaulin makes a great ‘canvas’,” Nick would later tell me. “Especially for acrylics.” I thought about Nick’s 1950’s philosophy in aiming for results. “What about now, Nick?” I asked. “What philosophy do you use when you approach a fresh canvas?” He told me it hasn’t changed much, except that he tends to listen more. “Listen?” I asked. “Yes, the canvas speaks,” Nick said. “And when the canvas speaks, listen!” n Frank Messina is a poet, actor and artist and the authorized biographer for Nicolas Carone. His book, Shadowed Master: The Nicolas Carone Story, is forthcoming.

This exhibition catalogue has been published on the occasion of Nicolas Carone: What Matters - The Late Paintings on at Loretta Howard Gallery June 6th - July 12th, 2019.