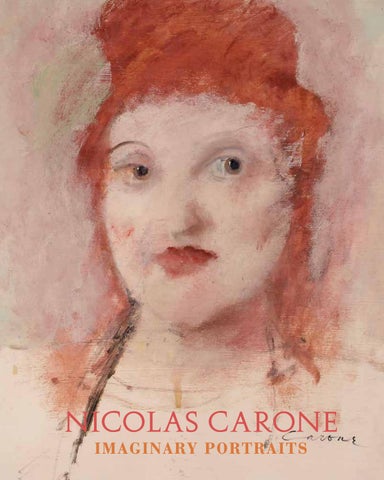 To be true to oneself. To let the hands move across the surface, listening to one’s inner self. Each sign, stroke, and color, the entirety of the physical tension and mental energy flowing onto the surface of a work of art to do just that: to be true to one’s inner voice. Integrity as a way of life, as the only possible way to be an artist. This is what Nicolas Carone instilled in all of us who had the privilege of being his students. This is what, above anything else, I like to remember him by. I first met Nicolas Carone in the studio of Italian painter Piero Dorazio in the hills just west of Todi, in Umbria, in the late seventies. Carone had a wonderful house of his own in the same area and spent his summers there. I was so impressed with this man I had just met and barely knew that I went on to study with him at the New York Studio School on 8th Street in New York City. What struck me was the intensity of his look, his fiery, dark eyes shaded by long strong and bushy eyebrows, the relentless energy and passion he put into every comment that he made. I was drawn to his total conviction regarding the necessity to make art, and that art was — above all and without doubt — special to the point of being sacred. He always talked about art, of the things he had just seen or those he remembered, about all the artists he had met, known, and befriended, constantly comparing different times and styles. Nicolas Carone transmitted his curiosity through passion.

The experience of having had Nicolas Carone as a teacher has been one that has endured. I learned by listening to him, his comments, his advice, and his critical analysis. Even more, I learned simply by looking at Nicolas — by then just Nic — draw all over the drawings we were attempting to create of a model on a stand in the studio. He tore through the pages with fast, confident marks, demonstrating what he wanted to convey with these gestures, which went far beyond the possible use of words. We students — or at least the ones who were close to Nicolas Carone, who chose to be close to him — learned from him in class, in school, sitting around a table drinking huge amounts of coffee, but also we learned as we admired the choices that he made, his coherence, and his hard-headed integrity. Much of what Nic said, his theories and his ideas about the picture plane, the development of space, I did not fully comprehend at the time, but even that not-understanding was inspirational, a goal to head for, a void that needed to be filled. Ever so slowly over the years, having become an art teacher, I would remember Nic’s words, his teachings, and little by little things fell into place, and what I could not understand became clear to me over time. In different moments of his life he found himself having to struggle: against the expectations from the outside, the changes in the attitude and wants of the art world and the art market, against incomprehension and the lack of recognition that his amazing talent deserved. But Carone never abandoned the search for his true self, never betrayed his instinctive approach to what he

liked and the place he felt he belonged to. Born on the Lower East Side of Manhattan to parents of southern Italian descent distinguished Carone from the other artists that he knew and worked side by side with. He constantly confronted his heritage by digging into the history of Italian art, always going back to the medieval paintings and frescoes of artists such as Giotto, Duccio, and Simone Martini. He always had before his eyes the artists of the Renaissance, especially Piero della Francesca. Having a house in Umbria was part of this connecting and reconnecting, a necessary proximity, a base from which he’d go back and look at the art that he liked best. Without teaching this specifically, he impressed upon us the importance of looking for oneself or confronting oneself through the lens of culture, through attentive observation, and that aligning of what we observed with the unknown within ourselves could, if we allowed it to, result in gestures: either automatic or choreographed. I often saw Nic move his thumb and his index finger in circular movements as though modeling a head in space. He would move his hand up, down, and across an ideal vertical plane as though drawing, painting, making the “Image” he often talked about. Because the Image was beyond the simple idea of figuration. The Image, with a capital I, is the precision, the ultimate emergence of self on a surface; it is the work of an individual, and it can only belong to a unique person, corresponding to that person’s inner voice. The real Image in Nicolas Carone’s work was Nic being true to himself: his history and his physicality, his mind, and his soul. n