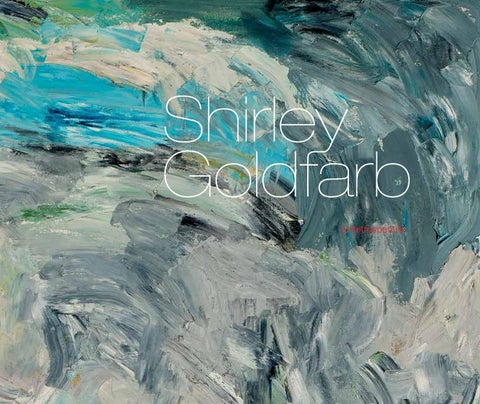 Journal Entry: September 3, 1975 I rented a table at the Flore— fee: 4 Francs, café compris It serves this table as my private island for as long as I wish provided of course I buy another café later. Benefices Fresh air, delicious breezes, private in public, an excellent café, first class bohemian ambiance, psychotherapeutic, all this for 4 F.

Shirley Goldfarb moved to New York in 1949 where she studied at the Art Students League. She befriended other artists and poets and adopted the bohemian lifestyle of downtown Manhattan. In 1954 she moved to Paris with her husband Gregory Masurovsky where she fell in love with the city and would ultimately spend the next 4 decades. It was here that she came into her own as an artist, diffusing the painterly action of Abstract Expressionism with a sense of light and color owed to her adoptive city. Thriving in a social milieu that encouraged eccentricity and flair, she created a new artistic persona and became a fixture of Parisâ&amp;#x20AC;&amp;#x2122; community of artists, writers, filmmakers and intellectuals. She formed friendships with Americans Joan Mitchell and Sam Francis, with David Hockney and with surrealist artists Alberto Giacometti, Man Ray and Max Ernst. Engaged constantly in conversation with her peers she was an active participant in a number of experimental happenings and films. Embracing the connection between art and life; her paintings run parallel to her longstanding practice of journaling and recording video, documenting life in the cafĂŠ at home and in the studio.

“When I came to France, I was much more physical with the canvas. That was probably due to Jackson pollock, whom I had met several times at the Cedar Bar in New York. The Tachisme I worked with came from the fact that I was very shy in life and therefore expressed myself aggressively on canvas… I had a great need to put everything down on the canvas, to fight with the canvas, to do SLAM, BANG with the brushes and to make the paint scream on the canvas. It was like a brawl, a war, if you please. When I arrived in Paris in 1954, I was only impressed by Monet, not by contemporaries, except for several Americans. For me, Monet was Paris. Light. In New York, I never saw a Monet. I went though a revolution here. When I saw the light in Paris and, after seeing a Monet, I realized they were one and the same thing. The same idea of space. Monet changed my way of seeing, as evidenced by the large canvases I showed with Joan Mitchell in the 1957 show, “Some Americans in Paris,” organized by John Ashbery in the rue de Grenelle. I saw Monet in France for the first time, and I mixed it with Tachisme, the aggressiveness I had picked up in America. I really loved Monet’s colors, the impressionist colors in the Parisian sky, and a kind of American aggressiveness in me, all that had come together.” Shirley Goldfarb interview with Michel Sicard, 1971 The National Museum of Women in the Arts, 1997

Journal Entry: May 7, 1974 Words written on a page Recite them and you’re an actress on the stage Atelier Hockney May 7 Cour de Rohan morning The sun is warm, caresses my sweater and back. I am sitting at David’s looking at ‘our’ portrait (me, Gregory, Sardi). It’s coming along. It is the gift of the gods to me—David’s amitié.

Journal Entry: August 3, 1971 “There is a tree in Saint Germain des Prés. I sit across the street from this sweetest of trees because it is my tree I pray that it and I shall stay forever (face à face) I at my table at Café Flore and my beautiful green leaf tree across the street in front of Lipps. The sky is grey black, a stormy weather sky. ... my daily life, my habits are closely connected to the paintings I produce…I think it’s nice to start the day as a painter with long walks. I hang around in the streets where my studio is, from rue Liancourt to Saint-Germain des Prés, where the Deux Magots Cafe is open now in July (the Flore and Lipp are open during the other months), and I stop there after a forty-five minute to one hour walk. I do that four times a day, to exercise my body and my mind. walks are great. They give me a sense of freedom, of independence…and that is very important for painting. The way I work is somewhat akin to the walks I take, one step at a time, one small dab after another on canvas.” Shirley Goldfarb interview with Michel Sicard, 1971 The National Museum of Women in the Arts, 1997

Day by Day – Paris Arts Center “When I look in my studio mirror…it has to be an image that I can live with. Therefore I created one style, one uniform I can wear every day…jeans, black top, black opera pumps, black eyeliner, blackish lipstick…Why not? “How do I feel about being a painter? I like to apply paint to canvas. It makes me feel worthy.” “…perhaps destiny is saving me for some fabulous dessert” Shirley Goldfarb, Paris, 1979

above: Film stills from the artists home movies 30

Loretta Howard Gallery is proud to present this catalog in conjunction with Shirley Goldfarb A Retropsective on View April 25 - June 8, 2013.