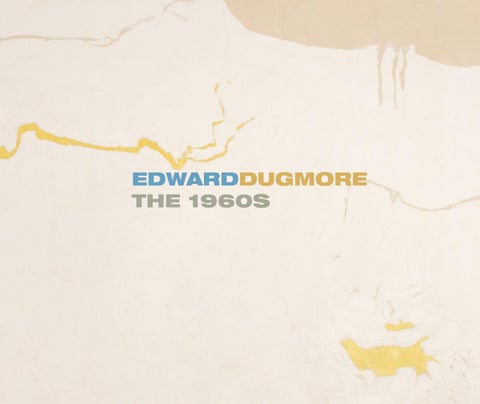 Edward Dugmore: The 1960s When Edward Dugmore arrived in Manhattan in the mid 1950s he helped define a generation of Abstract Expressionist painters whoâ&amp;#x20AC;&amp;#x2122;s legacy is now mythic in scale. This was an inward looking period known for its hard drinking, heated debate and cathartic, frenzied painting. Dugmore became a ubiquitous figure at the Cedar Street Tavern and the many downtown artist cooperatives that helped define this scene. By 1960 however, the fabric of this milieu had changed. Dugmoreâ&amp;#x20AC;&amp;#x2122;s close friend Clyfford Still left that year to paint in pastoral isolation on his farm in Westminster, Maryland. Willem de Kooning began spending increasingly more time in the rural hamlet of East Hampton before moving there permanently in 1971. Phillip Guston would abandon pure abstraction and take up permanent residence in the Catskill Mountains. For Dugmore, this decade would also mark an important turning point in his practice.

His paintings of the 1960s mark a shift away from the urbanism and introspection of the 1950s. Instead, they capture a sense of openness and reflection as the artist rediscovered the American landscape, in particular the American West and Coastal Maine. These works avoid literal depiction and instead embody the emotional and spiritual impact of the natural world. For Dugmore, the Rocky Mountains, which he experi4

enced as a visiting artist to the Aspen school of Art in 1961, became a mystic symbol. His paintings from this period stretch themselves out in stark fields of mottled black and white, shot through with sinuous skeins of brilliant color. The resulting silhouettes feel ancient and geological in nature but resist direct recognition. We feel the bodily impact of vast, humbling space and the unknowable force of the wilderness. The romantic impulse to embody nature rather than to simply illustrate it can be traced to a favorite influence of Dugmoreâ&amp;#x20AC;&amp;#x2122;s: the English poet

and painter William Blake, whoâ&amp;#x20AC;&amp;#x2122;s own ambition was to render the contemplation of nature as a transformative experience. This belief in the magical properties of nature stems from a lifelong fascination with Native American life and culture. He grew up reading his fathers collection of National Geographic Magazines with wide-eyed admiration. His first trip through the Rockies in 1948 was highlighted by an encounter with the Hopi and Navajo cultures. His reverence for these cultures, re-ignited during the 1960s, coincided with a broader cultural shift, as artists and intellectuals across the Western world began to look for cultural reference points outside Maine #33, 1965 Ink on paper 24 x 19 inches

of the Judeo-Christian world. The bold contours of Aspen Quartet recall the hide of a stretched buffalo, which was the subject of the artists first painting, at the age of seven and which remains an important symbol in various Native American traditions. We are reminded by the reverent tone of this work that the Rockies themselves are a consecrated space, host to the northern most of the four sacred mountains of the Navajo.

Equally important were Dugmore’s yearly trips to Mid-Coast Maine, where he and his wife, the photographer Edith Oslund-Dugmore, purchased land in 1961 along with fellow artists Ernie Briggs and Anne Arnold. A selection of ink drawings from the early 1960s highlights the important influence of this environment on the artist’s paintings of the next ten years. The artist sketched the landscape, 6

often times interpreting the evocative silhouette of craggy shorelines and wooded banks through their reflection in the choppy waters that swirled through the areas rivers and rock coves. The forms in these drawings and paintings conjure a vision of the natural

landscape that is bound to the power of human experience. The physical

world becomes a touchstone and reference point for the inner life of the artist. The foreground melts into the horizon; the sky breaks apart and becomes the floor. ■ Howard Hurst, New York, 2017

Published on the occasion of the exhibition "Edward Dugmore: The 1960s" at Loretta Howard Gallery, February 2017.