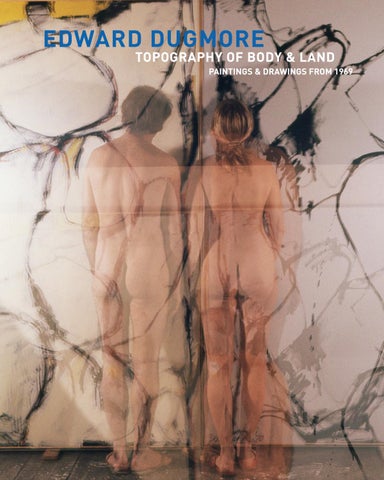 Of Men and Mountains David Anfam

“My backyard goes to the West Coast” —Edward Dugmore When asked whether a renowned theme in his First Symphony bore an intriguing resemblance to one in Beethoven’s Ninth, Johannes Brahms famously retorted, “Any fool can see that.” The same might be said to anyone who discerns Clyfford Still in Edward Dugmore’s art. Indeed, how could it not? As is well–known, Dugmore studied under Still for two years from 1948 onward at San Francisco’s California School of Fine Arts and was a co–founder of the Metart Gallery. The latter gave Still a one–man farewell exhibition in summer 1950. Moreover, to recall E. H. Gombrich, art in general tends to be born as much from other art as it is from individual experience. But more fool he or she who sees the similarities, not the differences. Indeed, only a fool would mistake an iconic Dugmore for a Still, while any keen eye can see that from early on Dugmore was his own man.

For a start, what Still called his “elemental characteristic” — the verticality he associated with the human presence — finds no counterpart in Dugmore. On the contrary, horizon-like demarcations recur through his 1950s paintings allied to a fragmentary mosaic of planes that often reinforce this orientation even when the format is upright (for example, #30 (Mexico), 1952). In fact, at the stage when traces of Still’s precedent were most likely — in the 1949–50 works — the overall impression is, if anything, more akin to the atmospheric qualities of Mark Rothko’s so–called “multiforms” and the early Sam Francis. Despite Dugmore’s sustained recourse to the palette knife, his touch quivers whereas Still’s slashes. Tactile as the rough surfaces may be, they also ex#30 (Mexico), 1952 Oil on canvas 91 x 58 5/8 inches

ude a certain calibrated delicacy (albeit charged with an urban drive) altogether unlike Still’s macabre, sharp and relentlessly attenuated mark–marking. To those “gothic” traits Dugmore opposed a palette by turns sun–drenched, fueled by his

sojourn in Mexico, or richly jewelled (Big Yellow, 1952) or mellow (Gold and White, 1958). The light glowing from these surfaces feels at root meditative and perhaps tinged with the seasons. Nature has turned inward. Then a change occurs. Around 1959 horizontality dominates afresh. In the great canvases of the following year or two huge yellow, purple or black expanses spread laterally, unfolding vistas with an unmistakable source. Nature. True, Dugmore spent time at the Aspen School of Contemporary Art in 1961. Nevertheless, the Rockies had been in his backyard, so to speak, since he first traversed them in 1948 and traveled across the continent several times during the next decade. This is where the deeper affinity with Still lies â&amp;#x20AC;&amp;#x201D; with an internalization of the Westâ&amp;#x20AC;&amp;#x2122;s land. However, each approached their mountains, as it were, from altogether disparate angles as befits two independent visions. One is apocalyptic, the other relatively quiescent.

No wonder, though, that both Still and Dugmore’s panoramas assumed a geological cast. Clay Spohn, another CSFA teacher, vouched for it: “After seeing many of Clyfford Still’s works I have come to the conclusion that he is a sorcerer with powerful magic…. Nay! An Earth Shaker!” Compared to Still’s seismic painterly scenes, Dugmore’s possess greater stability. They bulk massy as a mountain Grand Canyon, 1954 Mixed media in sketchbook

range, sounding a poetic and strangely reassuring note — as telluric forms sprung from time immemorial should be. We are not far from the Wordsworthian sublime and its cult of nature:

… yon shining cliffs, The untransmuted shapes of many worlds, Cerulean ether’s pure inhabitants, These forests unapproachable by death, That shall endure as long as man endures, To think, to hope, to worship, and to feel, To struggle, to be lost within himself Untitled #4, 1969 Oil on canvas 74 x 62 3/4 inches

In trepidation, from the blank abyss To look with bodily eyes, and be consoled.

in the early nineteenth century to contextualize Dugmore’s inscapes. Rather, it lies with Abstract Expressionism and his times.

Firstly, recall that Jackson Pollock began his career wishing to carve (not pour paint) as Gutzon Borglum had done with Mount Rushmore: “Sculptoring [sic] I think tho is my medium. I’ll never be satisfied until I’m able to mold a mountain of stone, with the aid of a jack hammer, to fit my will.” Secondly, the Kansas, circa 1941 Pencil and colored pencil in sketchbook

American composer Charles Ruggles, who knew Pollock’s teacher Thomas Hart Benton — under whom Dugmore studied at the Kansas Art Institute in 1941 — wrote an extraordinary symphonic piece aptly named Men and Mountains (1924). The music’s huge sound blocks, dissonant counterpoint and strange, widespan harmonies are not so remote from Dugmore’s tone colors, earthiness and weighty silhouettes. Finally, Ruggles’s title offers a tacit reminder that mountains need men to transform them into art’s lineaments. And women too. Here Still should make his last appearance and segue to Dugmore’s wife, an accomplished photographer. Suffice it to say Still ultimately avowed that “the figure stands behind it all.” In short, fusing this fundamental leitmotif with the West’s spaces enabled his singular synthesis. Since Still’s initial period has become public at his museum in Denver, the truth to his claim is clear. In a typical example from the 1930s the human body grows

distorted, tortured and stony, swelling to fill the image. Dugmore probably never saw such pieces at the CSFA (in 1977 he told me that Clyfford never allowed anyone to watch him painting), which makes their parallels with what he did in 1969 the more remarkable. Why have I left these extraordinary “late style” — that is, exploratory, provocative and intense — compositions to the end? Because without grasping them in the widest purview we fail to understand their full significance. Edith Dugmore’s photographs taken on the couple’s annual trips to the Maine coast elucidate and amplify the geoEdith Oslund Dugmore Untitled, circa 1960s silver print 11 x 8 1/2 inches

logical features to her husband’s work. The craggy stone has the fissures, compacted contours and grisaille prevalent in the 1969 paintings and works on paper. She also makes a key comment: “In general Dug was very moved and very

interested in landscape forms and the human figure.” To wit, the body was

present at the very outset of Dugmore’s artistic trajectory. At the age of seven Dugmore chose the hide of a buffalo for the subject of his first painting. It echoes still through the iconography of the early 1960s wherein the main fields resemble an écorché, a gigantic skin outstretched. Likewise, a youthful drawing of a reclining nude has an Old Master lurking in its ancestry — specifically Albrecht Dürer’s depiction of just

such a figure. Dürer’s device for sketching this body’s perspectival foreshortening effectively makes the woman’s anatomy into a cartography. So do the abstracted 1969 nudes. They are unquiet as nothing else

figured into the present. Without these turbulent kaleidoscopic energies the map of Dugmore’s changeful embodied landscapes would be incomplete.

Published by Loretta Howard Gallery on the occasion of the exhibition: Edward Dugmore: Topography of Body & Land - Paintings & Drawings from 1969 February 21st - March 23rd, 2019 An essay by David Anfam – Senior Consulting Curator at the Clyfford Still Museum, Denver, and curator of the acclaimed survey, Abstract Expressionism (Royal Academy of Arts, London, 2016-17) is included in this catalogue.