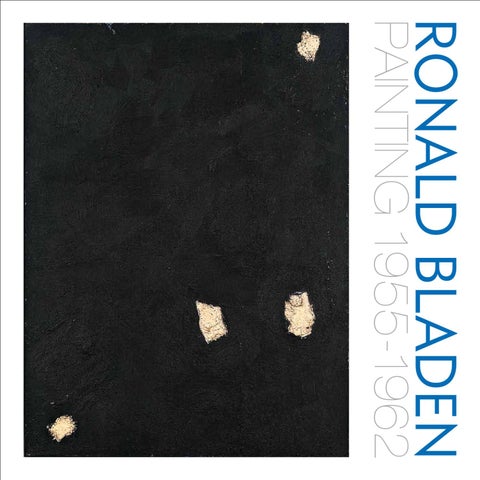 PAINTING 1955-1962 In the past twenty-five years, since a cache of some thirtyfive canvases and panels was discovered behind a wall in his studio that Bladen built in 1978 to seal them from sight, a legend has grown about his New York pictures.

Although not so formally confident looking as the sculptures, like them, his paintings are saturated with the feeling that what is there is what he most wanted to see. There were no sidetracks. Bladen’s conviction was fueled by an array of epiphany moments. He once told his longtime companion, Connie Reyes, of standing high on Partington Ridge at Big Sur sometime in the 1940s, stretching out his arms and seeing his shadow spread on clouds below. Later he would speak of wanting to place a sculpture on a mountaintop so that its reflection would be similarly cast. His work can be seen as bringing together high-pitched sensations of coastal landscape experienced in both the Pacific Northwest, where he grew up, and California, where he lived as a young man, as well as of the spatial dynamism he came to know in New York.

dia, each marked by his off combination of simmering originality and quick resolve. (That he insisted on neither signing nor dating his works, and only acquiesced to titling them if a friend’s suggestion struck his fancy, probably signifies his attunement to a fundamental theme-as constant as it was unnameable.) The revelatory glimmers he eventually distilled into highly simplified instances of what he called “space, dramatic relationships, excitement” led him to cloak his inmost aspirations in secrecy. But those close to him knew the stakes involved: as Al Held has said, “It was always there––the mystical inscape, and a fierce sense of the heroic.” According to Bill Jensen, who helped build his sculptural installation in the 1970s and early 1980s, Bladen worked “like rowing a boat across the oceanhe knew his directions internally.”

Success as a marker of phenomenal freestanding objects may have effectively blotted out from critical memory his long career as a painter. But Bladen, for his part, seems to have followed a primary vision through the baffles of many contiguous styles and changes of me-

Bladen’s first New York pictures show broad, buttery hints of landscape: some suggest peninsular outcroppings seen from above; others plunge the eye amid frontally massed tendrils or trails. A ruined canvas from around 1957 has gobs of paint so

heavy that they sagged on the fabric and caused it to tear away from the stretcher bar at the top; from then on, Bladen used only Masonite or plywood panels. His paint, too, increased in density: having blended powdered pigments with small portions of stand oil on a work table, he would haul the mixture with masonry trowels or lengths of two-by-fours and then knead or pound the colors to make them adhere. He told Irving Sandler: “I liked the strength that was in it…. the heaviness. I also liked the blocky feeling you could get by just throwing it up there. I even hammered some of it on––it was so hard.” So that the piled colors would bind together well, he eventually took care to work

them wet-on-wet in single sessions. Thus, the final, lucent “mound” paintings, with their gritty concretions protruding-sometimes as much as four inches-amid stucco or froth-like expanses, were painted very fast, starting at the top and finishing, he said, at the bottom, “like pulling down a window shade.” Bill Berkson

The present text is excerpted from “Ronald Bladen: Early and Late” in the catalogue accompanying the 1990 exhibition of that name, curated by Bill Berkson for the San Francisco Museum of Art.