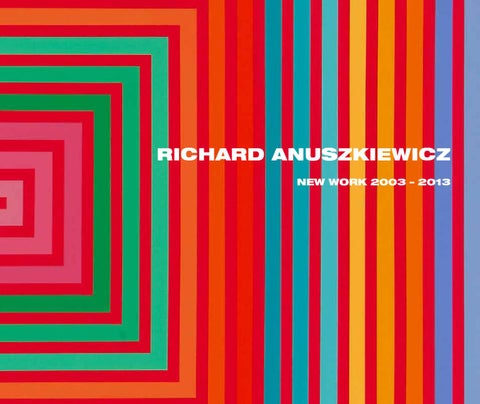 present exhibition features paintings made by American master Richard Anuszkiewicz during the past ten years. Over the course of a career that has spanned six decades, Anuszkiewicz has explored in his paintings and sculptures our shared visual responses to perceptual phenomena. These include color, line, and spatial relationships. He has made works that produce optical effects ranging from powerful to subtle, ones that lead us to reexamine how we see and thus how we understand the world around us. Anuszkiewicz’s works are informed by the science of optics but not dominated by it. The choices he makes in his works are most often intuitive, and he recognizes that the cutting-edge scientific exploration is also based on intuition. Anuszkiewicz’s paintings ask questions rather than provide easy answers. Within their geometric structures, the artist conjures exciting tensions between flatness and spatial illusion, surprising color shifts that depend on surrounding hues, and unexpected effects of simultaneous transparency and opacity. Yet, as a whole Anuszkiewicz’s paintings are classical in spirit; they have a commanding presence and an inherent grandeur. Their visual intensity generates emotional responses, but the emotions are disciplined and restrained. In the classical mode, Anuszkiewicz does not shy away from the concept of beauty. He has commented on his desire to “create a kind of distilled beauty,” saying, “To me beauty is a very positive word.” Also, in the classical vein, Anuszkiewicz’s visual concerns are ultimately philosophical in nature. They impart a deep humanist belief in the connectedness of our experiences and a faith in creative exploration. Anuszkiewicz’s art first came to wide public attention in the context of the Op Art movement of the 1960s. Along with Victor Vasarely and Bridget Riley, he has been acknowledged as a founder of the movement. However, Anuszkiewicz’s visual investigations preceded the Op Art movement by a number of years, and the variety and inventive range of his work over the subsequent decades has far outdistanced it. In actuality, Anuszkiewicz’s intellectual roots grow from the heroic first generation of modern artists that developed in the years around World War I. These artists include Piet Mondrian, Kazimir Malevich, Constantin Brancusi, Le Corbusier and the artists associated with the Bauhaus. Anuszkiewicz’s direct link to these artists is through Josef Albers, one of the founding members of the Bauhaus, with whom Anuszkiewicz studied at Yale University from 1953 to 1955. Albers devoted much of his art to the study of color relationships. While he is often viewed as a strict disciplinarian who taught only the structural analysis of color and form, Albers actually personalized colors and ascribed such characteristics as “serene, mighty and melancholic” to them. Similarly, Anuszkiewicz relies on feelings as well as analysis in his works. Anuszkiewicz embraces the connections between scientific and poetic knowledge.

Gestalt psychology which was made popular in America during the 1950s and 1960s by the writings of Rudolf Arnheim and James J. Gibson is an enduring inspiration for Anuszkiewicz. (Anuszkiewicz’s master’s thesis at Yale, one of his most important written documents, is an analysis of old master and modern drawings from a Gestalt viewpoint.) Gestalt psychology posits that seeing and thinking are not separate activities as they were traditionally considered to be; rather, they are fully integrated. Seeing actively involves speculation, correction, selection, contradiction, and analysis. As such, Gestalt psychology continually informs the visual questions asked by Anuszkiewicz’s work. Anuszkiewicz’s Mardi Gras (2013) features the central configuration of squares within a square-shaped canvas that lends the artist’s work a classical harmony. Yet, within the square format, every element provides the illusion of motion and change. The painting consists of triple bands of color that are divided by thin red stripes. Because the triple bands alternate between hot and cool hues, they appear in sequence to advance and recede. In addition, within each of the triple bands, the proximity of its color area to the adjoining band gives the illusion that the colors differ when in fact they are identical. As in many of Anuszkiewicz’s best works, Mardi Gras embodies simultaneously certainty and complex visual speculation. Dual Blue (2001-11) relies on simplicity and the effect of large areas of saturated color as opposed to complicated permutations. The vertical orientation of its two blue bars suggests Anuszkiewicz’s long-held architectural interests. The blue bars may be read simultaneously as piers and portals into space. One bar is framed by a purple perimeter and the other by green. The perimeters add to the spatial illusion making the two blue areas appear to be slightly different hues, when in reality they are identical. One seems to open space like a portal, and the other presses to the surface like an architectural beam. These works encourage us creatively to see and think. Richard Anuszkiewicz’s art expresses his own deeply held view of the modern age. He remains an optimist who believes that logical investigation and artistic invention can lead to a better understanding of the human condition.