Comedy in the City with David Morales 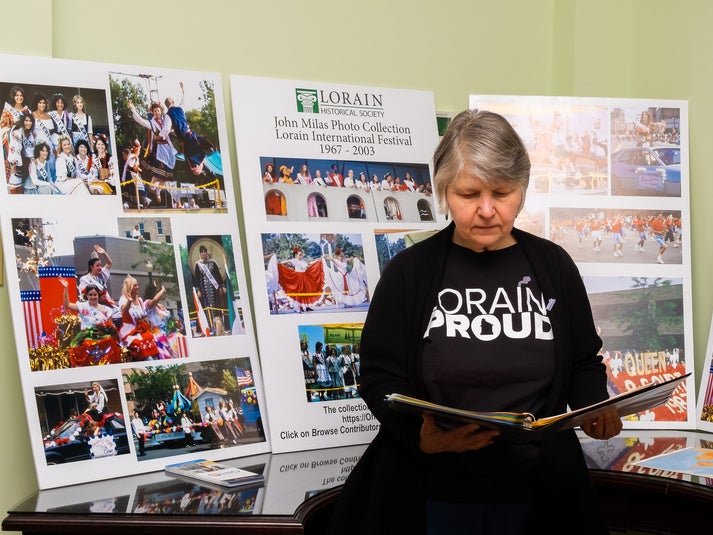 Defining History as It Continu...
written by Kelsey Leyva-Smith, photographed by Jason Shaffer

Growing the city’s comedy scene while building a comedic portfolio of his own has been the mission of one Lorain man for five years and counting.

David Morales, 34, said what started as an interest in entertainment in general developed into his current role producing and hosting comedy shows in The International City and elsewhere. He recalled reenacting tv shows and movie scenes as a child and eventually performing at open mic nights in Lakewood and Cleveland in July 2016.

“I wasn’t that good,” Morales said with a laugh. “I didn’t really understand how to talk to a crowd. It’s something you obviously learn the more times you go up, but I felt challenged enough in it personally where I was like, ‘I’m going to try to just get better at this.’”

With a goal in mind, Morales wasted no time in hosting his first show in his hometown.

On August 18, 2016, Morales was one of eight comics to perform at the then Charleston Coffee House on Broadway as part of “Comedy in Lorain: Make Lorain Laugh Again.”

“Being able to provide entertainment for people that live here in this area instead of having to go all the way out to Cleveland—it’s pretty dope,” he said, adding he doesn’t remember having comedy shows to attend while growing up.

Morales said he started to take his comedy career more seriously after being a passenger in a car accident in November 2018. Since then, he said he likes to spend at least two hours a day networking, booking shows, scheduling shows, marketing, and producing content.

And hard work paid off in 2019 when he was voted fourth “Best Male Comic in Cleveland” in Cleveland Scene Magazine’s Best Of.

In Lorain, Morales has produced and hosted comedy shows featuring music at venues such as Union Town Provisions, Speak of the Devil, and The Shipyards Event Center. In 2021, Morales also coordinated a monthly open mic night on Wednesdays from May through December at The Palace Theatre.

He said performing in the Cleveland area allowed him to build a network of comedians who now love to perform in Lorain.

“All the comics who come out here from Cleveland and Akron and Youngstown—they love it. They have such a good time. They call me the King of Lorain even at their shows. I love it.”

Morales said making those kinds of connections with other comics is one of his favorite parts of being in the area’s comedy scene.

“I think the best part of it really, for me, is just all the people that I’ve met and friends that I’ve made and places that I’ve been fortunate enough to go,” he said. “To be backstage in different places and then being able to walk on stage through a curtain—it’s awesome. There’s no better feeling.”

In general, Morales said comedy is fun, noting “everyone loves to laugh.” His material often centers around his personal life, such as family and relationships, and is not meant for younger audiences.

To prepare for a performance, Morales will order a shot and a beer and listen to artists including Ye/Kanye West, Key Glock, and Tame Impala to get in the right headspace.

“Every single time I perform it feels right, honestly,” he said. “I love it. There’s nothing I’ve ever done in my entire life that I love more.”

Looking forward to a busy 2022, Morales said he plans to continue the monthly open mic nights at The Palace and produce shows in Lorain and out of state. Morales said he wants to perform in places such as Columbus, Cincinnati, Indiana, and Chicago, and he is going to New York in April.

He said the pandemic interrupted his plans to perform and produce shows out of state, so he’s working hard to make up for lost time.

“That’s all I want to do is just do more out of state shows all while producing shows here still in Lorain.”

Morales will also be performing again as part of the FireFish Festival series of events, with one show in the spring and one in the fall.

In June, Morales will be teaching a comedy workshop for students in the community.

This story is from:
Lorain Local Magazine—Issue Eleven
by lorainlocal