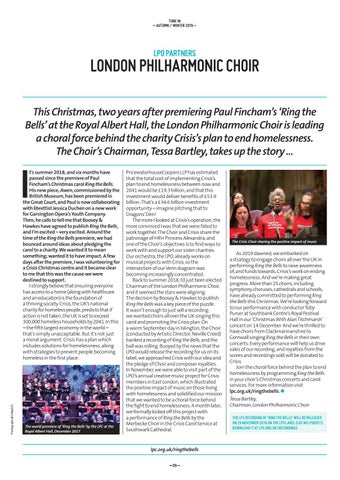 LONDON PHILHARMONIC CHOIR This Christmas, two years after premiering Paul Fincham’s ‘Ring the Bells’ at the Royal Albert Hall, the London Philharmonic Choir is leading a choral force behind the charity Crisis’s plan to end homelessness. The Choir’s Chairman, Tessa Bartley, takes up the story ...

t’s summer 2018, and six months have passed since the premiere of Paul Fincham’s Christmas carol Ring the Bells. His new piece, Awen, commissioned by the British Museum, has been premiered in the Great Court, and Paul is now collaborating with librettist Jessica Duchen on a new work for Garsington Opera’s Youth Company. Then, he calls to tell me that Boosey &amp; Hawkes have agreed to publish Ring the Bells, and I’m excited – very excited. Around the time of the Ring the Bells premiere, we had bounced around ideas about pledging the carol to a charity. We wanted it to mean something; wanted it to have impact. A few days after the premiere, I was volunteering for a Crisis Christmas centre and it became clear to me that this was the cause we were destined to support. I strongly believe that ensuring everyone has access to a home (along with healthcare and an education) is the foundation of a thriving society. Crisis, the UK’s national charity for homeless people, predicts that if action is not taken, the UK is set to exceed 300,000 homeless households by 2041. In this – the fifth largest economy in the world – that’s simply unacceptable. But it’s not just a moral argument. Crisis has a plan which includes solutions for homelessness, along with strategies to prevent people becoming homeless in the first place.

The world premiere of ‘Ring the Bells’ by the LPC at the Royal Albert Hall, December 2017

PricewaterhouseCoopers LLP has estimated that the total cost of implementing Crisis’s plan to end homelessness between now and 2041 would be £19.3 billion, and that this investment would deliver benefits of £53.9 billion. That’s a £34.6 billion investment opportunity – imagine pitching that to Dragons’ Den! The more I looked at Crisis’s operation, the more convinced I was that we were fated to work together. The Choir and Crisis share the patronage of HRH Princess Alexandra, and one of the Choir’s objectives is to find ways to work with and support our sister charities. Our orchestra, the LPO, already works on musical projects with Crisis, so the intersection of our Venn diagram was becoming increasingly concentrated. Back to summer 2018, I’d just been elected Chairman of the London Philharmonic Choir, and it seemed the stars were aligning. The decision by Boosey &amp; Hawkes to publish Ring the Bells was a key piece of the puzzle. It wasn’t enough to just sell a recording: we wanted choirs all over the UK singing this carol and promoting the Crisis plan. On a warm September day in Islington, the Choir (conducted by Artistic Director, Neville Creed) banked a recording of Ring the Bells, and the ball was rolling. Buoyed by the news that the LPO would release the recording for us on its label, we approached Crisis with our idea and the pledge of Choir and composer royalties. In November, we were able to visit part of the LPO’s annual creative music project for Crisis members in East London, which illustrated the positive impact of music on those living with homelessness and solidified our mission that we wanted to be a choral force behind the fight to end homelessness. A month later, we formally kicked off this project with a performance of Ring the Bells by the Merbecke Choir in the Crisis Carol Service at Southwark Cathedral.

The Crisis Choir sharing the positive impact of music

As 2019 dawned, we embarked on a strategy to engage choirs all over the UK in performing Ring the Bells to raise awareness of, and funds towards, Crisis’s work on ending homelessness. And we’re making great progress. More than 25 choirs, including symphony choruses, cathedrals and schools, have already committed to performing Ring the Bells this Christmas. We’re looking forward to our performance with conductor Toby Purser at Southbank Centre’s Royal Festival Hall in our ‘Christmas With Alan Titchmarsh’ concert on 14 December. And we’re thrilled to have choirs from Clackmannanshire to Cornwall singing Ring the Bells in their own concerts. Every performance will help us drive sales of our recording, and royalties from the scores and recordings sold will be donated to Crisis. Join the choral force behind the plan to end homelessness by programming Ring the Bells in your choir’s Christmas concerts and carol services. For more information visit lpc.org.uk/ringthebells. Tessa Bartley, Chairman, London Philharmonic Choir THE LPC RECORDING OF ‘RING THE BELLS’ WILL BE RELEASED ON 29 NOVEMBER 2019 ON THE LPO LABEL (CAT NO LPOD911). DOWNLOAD IT AT LPO.ORG.UK/RECORDINGS 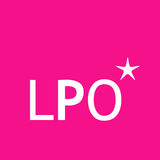