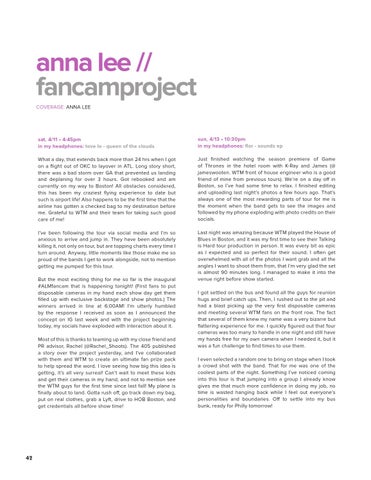 What a day, that extends back more than 24 hrs when I got on a flight out of OKC to layover in ATL. Long story short, there was a bad storm over GA that prevented us landing and deplaning for over 3 hours. Got rebooked and am currently on my way to Boston! All obstacles considered, this has been my craziest flying experience to date but such is airport life! Also happens to be the first time that the airline has gotten a checked bag to my destination before me. Grateful to WTM and their team for taking such good care of me!

Just finished watching the season premiere of Game of Thrones in the hotel room with K-Ray and James (@ jameswooten. WTM front of house engineer who is a good friend of mine from previous tours). We’re on a day off in Boston, so I’ve had some time to relax. I finished editing and uploading last night’s photos a few hours ago. That’s always one of the most rewarding parts of tour for me is the moment when the band gets to see the images and followed by my phone exploding with photo credits on their socials.

I’ve been following the tour via social media and I’m so anxious to arrive and jump in. They have been absolutely killing it, not only on tour, but are topping charts every time I turn around. Anyway, little moments like those make me so proud of the bands I get to work alongside, not to mention getting me pumped for this tour.

Last night was amazing because WTM played the House of Blues in Boston, and it was my first time to see their Talking is Hard tour production in person. It was every bit as epic as I expected and so perfect for their sound. I often get overwhelmed with all of the photos I want grab and all the angles I want to shoot them from, that I’m very glad the set is almost 90 minutes long. I managed to make it into the venue right before show started.

But the most exciting thing for me so far is the inaugural #ALMfancam that is happening tonight! (First fans to put disposable cameras in my hand each show day get them filled up with exclusive backstage and show photos.) The winners arrived in line at 6:00AM! I’m utterly humbled by the response I received as soon as I announced the concept on IG last week and with the project beginning today, my socials have exploded with interaction about it. Most of this is thanks to teaming up with my close friend and PR advisor, Rachel (@Rachel_Shoots). The 405 published a story over the project yesterday, and I’ve collaborated with them and WTM to create an ultimate fan prize pack to help spread the word. I love seeing how big this idea is getting, it’s all very surreal! Can’t wait to meet these kids and get their cameras in my hand, and not to mention see the WTM guys for the first time since last fall! My plane is finally about to land. Gotta rush off, go track down my bag, put on real clothes, grab a Lyft, drive to HOB Boston, and get credentials all before show time!

I got settled on the bus and found all the guys for reunion hugs and brief catch ups. Then, I rushed out to the pit and had a blast picking up the very first disposable cameras and meeting several WTM fans on the front row. The fact that several of them knew my name was a very bizarre but flattering experience for me. I quickly figured out that four cameras was too many to handle in one night and still have my hands free for my own camera when I needed it, but it was a fun challenge to find times to use them. I even selected a random one to bring on stage when I took a crowd shot with the band. That for me was one of the coolest parts of the night. Something I’ve noticed coming into this tour is that jumping into a group I already know gives me that much more confidence in doing my job, no time is wasted hanging back while I feel out everyone’s personalities and boundaries. Off to settle into my bus bunk, ready for Philly tomorrow! 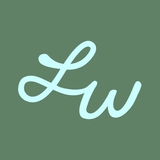