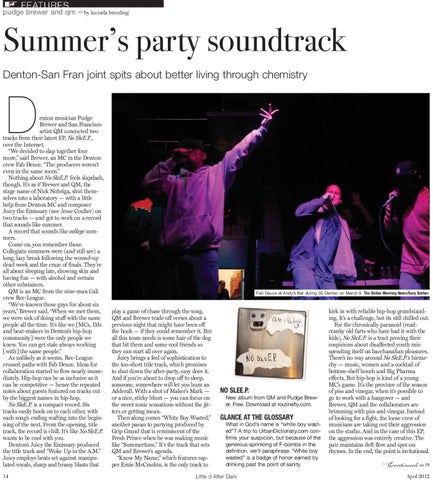 enton musician Pudge Brewer and San Francisco artist QM concocted two tracks from their latest EP, No SleE.P., over the Internet. “We decided to slap together four more,” said Brewer, an MC in the Denton crew Fab Deuce. “The producers weren’t even in the same room.” Nothing about No SleE.P. feels slapdash, though. It’s as if Brewer and QM, the stage name of Nick Nobriga, shut themselves into a laboratory — with a little help from Denton MC and composer Juicy the Emissary (nee Jesse Coulter) on two tracks — and got to work on a record that sounds like summer. A record that sounds like college summers. Come on, you remember those. Collegiate summers were (and still are) a long, lazy break following the wound-up dead week and the craze of finals. They’re all about sleeping late, showing skin and having fun — with alcohol and certain other substances. QM is an MC from the nine-man Cali crew Rec-League. “We’ve known those guys for about six years,” Brewer said. “When we met them, we were sick of doing stuff with the same people all the time. It’s like we [MCs, DJs and beat-makers in Denton’s hip-hop community] were the only people we knew. You can get stale always working [with] the same people.” As unlikely as it seems, Rec-League crossed paths with Fab Deuce. Ideas for collaboration started to flow nearly immediately. Hip-hop can be as inclusive as it can be competitive — hence the repeated notes about guests featured on tracks cut by the biggest names in hip-hop. No SleE.P. is a compact record. Six tracks easily hook on to each other, with each song’s ending wafting into the beginning of the next. From the opening, title track, the record is chill. It’s like No SleE.P. wants to be cool with you. Denton’s Juicy the Emissary produced the title track and “Woke Up in the A.M.” Juicy employs beats set against manipulated vocals, sharp and brassy blasts that 14

play a game of chase through the song. QM and Brewer trade off verses about a previous night that might have been off the hook — if they could remember it. But all this team needs is some hair of the dog that bit them and some cool friends so they can start all over again. Juicy brings a feel of sophistication to the too-short title track, which promises to shut down the after-party, easy does it. And if you’re about to drop off to sleep, someone, somewhere will let you bum an Adderall. With a shot of Maker’s Mark — or a nice, sticky blunt — you can focus on the sweet sonic sensations without the jitters or getting mean. Then along comes “White Boy Wasted,” another paean to partying produced by Grip Grand that is reminiscent of the Fresh Prince when he was making music like “Summertime.” It’s the track that sets QM and Brewer’s agenda. “Know My Name,” which features rapper Ernie McCrackin, is the only track to

NO SLEE.P. New album from QM and Pudge Brewer. Free. Download at routinefly.com.

GLANCE AT THE GLOSSARY What in God’s name is “white boy wasted”? A trip to UrbanDictionary.com confirms your suspicion, but because of the generous sprinkling of F-bombs in the definition, we’ll paraphrase. “White boy wasted” is a badge of honor earned by drinking past the point of sanity.

kick in with reliable hip-hop grandstanding. It’s a challenge, but its still chilled out. For the chronically paranoid (read: cranky old farts who have had it with the kids), No SleE.P. is a tract proving their suspicions about disaffected youth misspending itself on bacchanalian pleasures. There’s no way around No SleE.P.’s hierarchy — music, women and a cocktail of bottom-shelf hooch and Big Pharma effects. But hip-hop is kind of a young MC’s game. It’s the province of the season of piss and vinegar, when it’s possible to go to work with a hangover — and Brewer, QM and the collaborators are brimming with piss and vinegar. Instead of looking for a fight, the loose crew of musicians are taking out their aggression on the studio. And in the case of this EP, the aggression was entirely creative. The pair maintains deft flow and spot-on rhymes. In the end, the point is invitational. &gt;&gt;