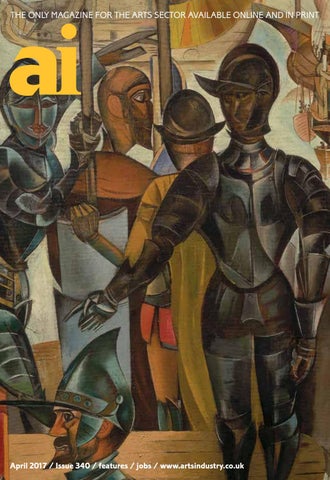 Nation shall speak art unto nation Counterpoint Arts is in the middle of an experiment at Tate Modern in which arts are engaging the public on migration. Simon Tait reports

Going to the pictures, again For 50 years the Cinema Theatre Association has been keeping a watchful eye on the UK’s dwindling stock of classic picture houses, and the vigil is as strong as ever, as the CTA’s Richard Gray told AI

And they’re off! Which city will follow Hull as UK City of Culture? AI looks at the runners and riders

Due progress of the law A City-based global law firm, Clyde &amp; Co, is pioneering a scheme to sponsor young artists as they graduate. Its trustees revealed it to AI

7 Dea Birkett 12 The Word For 35 years a glittering presence in the cultural calendar was the Arts &amp; Business Awards, presided over by Colin Tweedy, then chief executive of Arts &amp; Business. Although the awards are still presented in Scotland, Wales and Northern Ireland, the UK-wide presentations were last made in 2013. But Tweedy, now CEO of The Built Environment Trust and The Building Centre, is planning a new award to take their place

14 Good Practice Guide Can commerce influence the culture projects it sponsors? Professor Anette Mikes of the University of Lausanne found an object lesson in plans to turn Charlie Chaplin’s Swiss home into a museum

Chloé Nelkin trained as a classical singer and studied art history at the Courtauld Institute, but started her own PR agency while still at university. Now 29, her company’s clients range from the West End to the Edinburgh Fringe

30 Passing by... Antony Thorncroft thinks the constant search for new audiences is misguided

Cover photo: Amy Winehouse, who died in 2011, is to be celebrated by the Jewish Museum in Camden with a street art trail opening on March 15 in a specially commissioned installation from street artist Pegasus.

Nation shall speak art unto nation Counterpoint Arts is in the middle of an experiment at Tate Modern in which arts are engaging the public on migration. Simon Tait reports

lketa Xhafa-Mripa’s installation art is a Luton taillift van. Inside is a sitting room, where you can relax in a rustic wooden carver chair, enjoy a cup of tea and a chat with the artist. For you are part of the work of art, which is called Refugees Welcome. “It’s agit prop installation meets performance” says Áine O&#96;Brien, codirector of Counterpoint Arts. “I think it’s an emerging trend with a lot of artists, mixing categories and genres with a vengeance, not for the sake of it but because they genuinely want to make sense of what is happening.” Alketa is herself a 36-year-old Kosovan former refugee and the installation’s purpose is to show that the notion of “welcome” is a personal response, not a political tactic: this mobile home, which will be turning up in car parks and roadsides all over the country, is a signifier of the importance of human contact, wherever it happens. Except that the van is not on the road today, it is in Tate Modern as part of Who Are We?, a six-day event in Tate Exchange, a programme in the new Switch House that allows artists and curators to test ideas of how art can make a difference to society. Who Are We? is a series of platforms that ends on March 19 on which more than 20 artists, collaborations and nonarts institutions reflect on identity, belonging, migration and citizenship. Many, though not all, the artists have been helped by Counterpoint.

“I think that artists are actually asking the critical interesting questions in a way the political scene is not, I think the scene they have stepped into is really interesting” O’Brien says. “A lot of artists coming to Tate Exchange could do work anywhere, and would have equal levels of impact; some have got to be in a gallery or theatre to do it. There is hostility and it’s tricky to do that kind of work, so you need to be able to create places where people feel relatively safe and able to speak to each other. There’s a real skill in that.” She founded Counterpoint Arts in 2012 with Almir Koldzic, a refugee himself from Yugoslavia when he came to Britain to study English more than 20 years ago. Both were working on projects to engage with refugee and migrant experiences through arts and cultural programmes, O’Brien through Trinity College, Dublin, and Koldzic through the Refugee Council in London. The problem they both had was that progress in a rapidly changing scope was slowed down by being embedded in large organisations. “We needed to be able to move faster, and excellent as those two organisations were the processes were affecting the work” says Koldzic. Despite them both working in the same orbit they only met when introduced by a funder, the global charity Unbound Philanthopy which is devoted to helping lives spoiled by borders. “We didn’t know about each other’s work – a symptom of working so hard” says Koldzic. “But a small organisation like this is more agile, you

can make decisions faster, pay people faster – every day details are important. Before, it was difficult to find a way of prioritising the art projects I had in mind with the Refugee Council, so we needed to move away from these organisations and make a new one, create a platform that focuses only on arts and culture”. Counterpoint works like a first stop for displaced artists, helping them find support, funding, studio space, exhibition opportunities - and friends. “We engage with refugee and migrant experiences, support emerging artists and work that’s engaging with this,

Áine O’Brien (above left) and Almir Koldzic (above right). Alketa Xhafa-Mripa and her welcoming van (main image). and to find ways of expanding the body of work to reach wider audiences” Koldzic says. “There’s an element of always facing outwards, and thinking of ourself as an arts organisation that tries to bridge the arts with other sectors – the Refugee Council is still a partner”. To begin with they sought out artists, now they tend to come to them and their office in Hackney, and last year Counterpoint helped more than 200 artists. They work on the principal that helping migrant artists will give a return in enabling the public to have a better informed understanding

“I think that artists are actually asking the critical interesting questions in a way the political scene is not, I think the scene they have stepped into is really interesting” of global migration, “a way of understanding who we all are in relation to each other”. So another artist in the Who Are We? group, Gil Mualem-Doron, has adapted the union flag, which has just “fallen into use”, to include designs

from colonial countries and the various ethnic and national groups that are now part of Britain. The absurdist artist Richard Dedomenici has devised Shed Your Tears in which two people in a booth together confess their fears to each other, in the &gt;&gt; Arts Industry April 2017 9

“The practice of art is a language in and of itself, and we sometimes need to educate people – funders, perhaps – that the arts have their own vernacular and methodology.” &gt;&gt; hope that by sharing them their dreads will diminish. In Searching for Great Aunt Mima, the South African photographer Jillian Edelstein traces the migration from Eastern Europe to Southern Africa. For Weight, Ania Bas and Season Butler ask participants to write about 24 brands of products ranging from cheese to online platforms to see if choices can define leavers and remainers in the Brexit debate. And there are different languages that are understood in different sectors – artspeak and bankspeak may not use the same lexicon, and Counterpoint has to be able to translate. “It depends on who the funder is and who the audience is, so if a funder is concerned more with engaging with the public on refugee and migrantrelated experiences, a certain kind of language is needed to change hearts and minds” Koldzic says, “whereas in the arts world there will be a different emphasis”.

The artists themselves range enormously, says O’Brien, some are refugees but create work that is not explicitly concerned with those experiences, while others are committed to recording their migrant stories. “Art isn’t imply instrumental” she says. “The practice of art is a language in and of itself, and we sometimes need to educate people – funders, perhaps – that the arts have their own vernacular and methodology”. But although part of Counterpoint’s task is to get artists’ work seen, what is happening at Tate Exchange this weekend, she says, is not a marketplace. “It’s a laboratory, not a conventional gallery, it’s about engaging the public. A lot of artists we’re curating are stepping onto risky ground, taking risks themselves, assuming their work is only going to work if it’s engaging and pulling people into a conversation. And if art gets people talking about the issues, it’s broken a barrier.”

Right: Gil Mualem-Doron, centre, and some of his rethought union flags.

Below: Two of Jillian Edelstein’s great aunts are in this 1930s pictures of the Raye Levin Ladies’ Dance Orchestra in Cape Town.