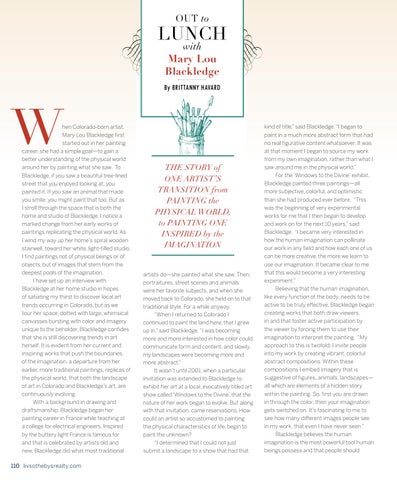 hen Colorado-born artist, Mary Lou Blackledge first started out in her painting career, she had a simple goal—to gain a better understanding of the physical world around her by painting what she saw. To Blackledge, if you saw a beautiful tree-lined street that you enjoyed looking at, you painted it. If you saw an animal that made you smile, you might paint that too. But as I stroll through the space that is both the home and studio of Blackledge, I notice a marked change from her early works of paintings replicating the physical world. As I wind my way up her home’s spiral wooden stairwell, toward her white, light-filled studio, I find paintings not of physical beings or of objects, but of images that stem from the deepest pools of the imagination. I have set up an interview with Blackledge at her home studio in hopes of satiating my thirst to discover local art trends occurring in Colorado, but as we tour her space, dotted with large, whimsical canvasses bursting with color and imagery unique to the beholder, Blackledge confides that she is still discovering trends in art herself. It is evident from her current and inspiring works that push the boundaries of the imagination, a departure from her earlier, more traditional paintings, replicas of the physical world, that both the landscape of art in Colorado and Blackledge’s art, are continuously evolving. With a background in drawing and draftsmanship, Blackledge began her painting career in France while teaching at a college for electrical engineers. Inspired by the buttery light France is famous for and that is celebrated by artists old and new, Blackledge did what most traditional

THE STORY of ONE ARTIST’S TRANSITION from PAINTING the PHYSICAL WORLD, to PAINTING ONE INSPIRED by the IMAGINATION

artists do—she painted what she saw. Then, portraitures, street scenes and animals were her favorite subjects, and when she moved back to Colorado, she held on to that traditional style. For a while anyway. “When I returned to Colorado I continued to paint the land here, that I grew up in,” said Blackledge. “I was becoming more and more interested in how color could communicate form and content, and slowly, my landscapes were becoming more and more abstract.” It wasn’t until 2001, when a particular invitation was extended to Blackledge to exhibit her art at a local, evocatively titled art show called ‘Windows to the Divine’, that the nature of her work began to evolve. But along with that invitation, came reservations. How could an artist so accustomed to painting the physical characteristics of life, begin to paint the unknown? “I determined that I could not just submit a landscape to a show that had that

kind of title,” said Blackledge. “I began to paint in a much more abstract form that had no real figurative content whatsoever. It was at that moment I began to source my work from my own imagination, rather than what I saw around me in the physical world.” For the ‘Windows to the Divine’ exhibit, Blackledge painted three paintings—all more subjective, colorful, and optimistic than she had produced ever before. “This was the beginning of very experimental works for me that I then began to develop and work on for the next 10 years,” said Blackledge. “I became very interested in how the human imagination can pollinate our work in any field and how each one of us can be more creative, the more we learn to use our imagination. It became clear to me that this would become a very interesting experiment.” Believing that the human imagination, like every function of the body, needs to be active to be truly effective, Blackledge began creating works that both draw viewers in and that foster active participation by the viewer by forcing them to use their imagination to interpret the painting. “My approach to this is twofold; I invite people into my work by creating vibrant, colorful abstract compositions. Within these compositions I embed imagery that is suggestive of figures, animals, landscapes— all which are elements of a hidden story within the painting. So, first you are drawn in through the color, then your imagination gets switched on. It’s fascinating to me to see how many different images people see in my work, that even I have never seen.” Blackledge believes the human imagination is the most powerful tool human beings possess and that people should 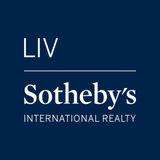