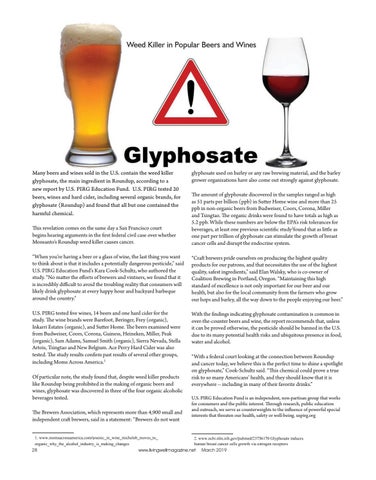 Many beers and wines sold in the U.S. contain the weed killer glyphosate, the main ingredient in Roundup, according to a new report by U.S. PIRG Education Fund. U.S. PIRG tested 20 beers, wines and hard cider, including several organic brands, for glyphosate (Roundup) and found that all but one contained the harmful chemical.

glyphosate used on barley or any raw brewing material, and the barley grower organizations have also come out strongly against glyphosate.

The amount of glyphosate discovered in the samples ranged as high as 51 parts per billion (ppb) in Sutter Home wine and more than 25 ppb in non-organic beers from Budweiser, Coors, Corona, Miller and Tsingtao. The organic drinks were found to have totals as high as 5.2 ppb. While these numbers are below the EPA’s risk tolerances for beverages, at least one previous scientific study2found that as little as one part per trillion of glyphosate can stimulate the growth of breast cancer cells and disrupt the endocrine system.

“When you’re having a beer or a glass of wine, the last thing you want to think about is that it includes a potentially dangerous pesticide,” said U.S. PIRG Education Fund’s Kara Cook-Schultz, who authored the study. “No matter the efforts of brewers and vintners, we found that it is incredibly difficult to avoid the troubling reality that consumers will likely drink glyphosate at every happy hour and backyard barbeque around the country.”

“Craft brewers pride ourselves on producing the highest quality products for our patrons, and that necessitates the use of the highest quality, safest ingredients,” said Elan Walsky, who is co-owner of Coalition Brewing in Portland, Oregon. “Maintaining this high standard of excellence is not only important for our beer and our health, but also for the local community from the farmers who grow our hops and barley, all the way down to the people enjoying our beer.”

With the findings indicating glyphosate contamination is common in over-the-counter beers and wine, the report recommends that, unless it can be proved otherwise, the pesticide should be banned in the U.S. due to its many potential health risks and ubiquitous presence in food, water and alcohol.

Of particular note, the study found that, despite weed killer products like Roundup being prohibited in the making of organic beers and wines, glyphosate was discovered in three of the four organic alcoholic beverages tested. The Brewers Association, which represents more than 4,900 small and independent craft brewers, said in a statement: “Brewers do not want 1. www.momsacrossamerica.com/arsenic_in_wine_michelob_moves_to_ organic_why_the_alcohol_industry_is_making_changes

“With a federal court looking at the connection between Roundup and cancer today, we believe this is the perfect time to shine a spotlight on glyphosate,” Cook-Schultz said. “This chemical could prove a true risk to so many Americans’ health, and they should know that it is everywhere -- including in many of their favorite drinks.” U.S. PIRG Education Fund is an independent, non-partisan group that works for consumers and the public interest. Through research, public education and outreach, we serve as counterweights to the influence of powerful special interests that threaten our health, safety or well-being. uspirg.org 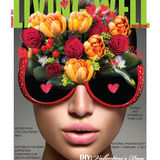 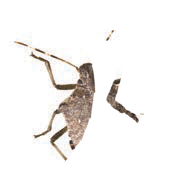 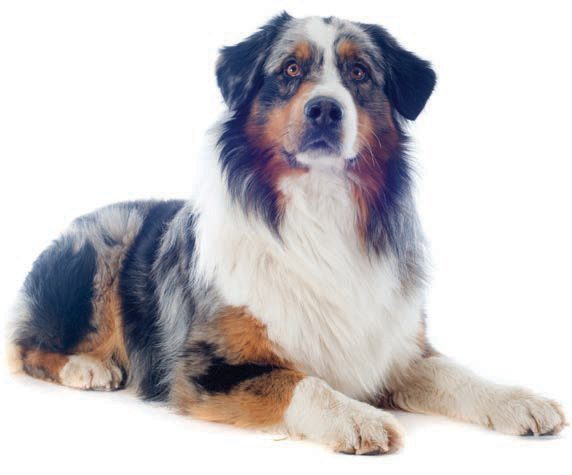 Pet Allergies doesn't mean you have to live without your furry friends!

The Return of the Fanny Pack

Glyphosate A popular Weed Killer in our Beer and Wine