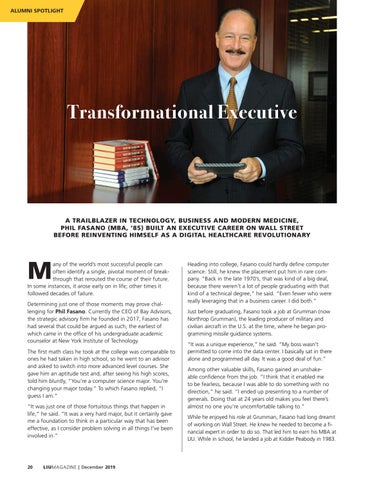 A TRAILBLAZER IN TECHNOLOGY, BUSINESS AND MODERN MEDICINE, PHIL FASANO (MBA, ’85) BUILT AN EXECUTIVE CAREER ON WALL STREET BEFORE REINVENTING HIMSELF AS A DIGITAL HEALTHCARE REVOLUTIONARY

any of the world’s most successful people can often identify a single, pivotal moment of breakthrough that rerouted the course of their future. In some instances, it arose early on in life; other times it followed decades of failure. Determining just one of those moments may prove challenging for Phil Fasano. Currently the CEO of Bay Advisors, the strategic advisory firm he founded in 2017, Fasano has had several that could be argued as such, the earliest of which came in the office of his undergraduate academic counselor at New York Institute of Technology. The first math class he took at the college was comparable to ones he had taken in high school, so he went to an advisor and asked to switch into more advanced level courses. She gave him an aptitude test and, after seeing his high scores, told him bluntly, “You’re a computer science major. You’re changing your major today.” To which Fasano replied, “I guess I am.” “It was just one of those fortuitous things that happen in life,” he said. “It was a very hard major, but it certainly gave me a foundation to think in a particular way that has been effective, as I consider problem solving in all things I’ve been involved in.”

Heading into college, Fasano could hardly define computer science. Still, he knew the placement put him in rare company. “Back in the late 1970’s, that was kind of a big deal, because there weren’t a lot of people graduating with that kind of a technical degree,” he said. “Even fewer who were really leveraging that in a business career. I did both.” Just before graduating, Fasano took a job at Grumman (now Northrop Grumman), the leading producer of military and civilian aircraft in the U.S. at the time, where he began programming missile guidance systems. “It was a unique experience,” he said. “My boss wasn’t permitted to come into the data center. I basically sat in there alone and programmed all day. It was a good deal of fun.” Among other valuable skills, Fasano gained an unshakeable confidence from the job. “I think that it enabled me to be fearless, because I was able to do something with no direction,” he said. “I ended up presenting to a number of generals. Doing that at 24 years old makes you feel there’s almost no one you’re uncomfortable talking to.” While he enjoyed his role at Grumman, Fasano had long dreamt of working on Wall Street. He knew he needed to become a financial expert in order to do so. That led him to earn his MBA at LIU. While in school, he landed a job at Kidder Peabody in 1983. 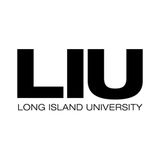