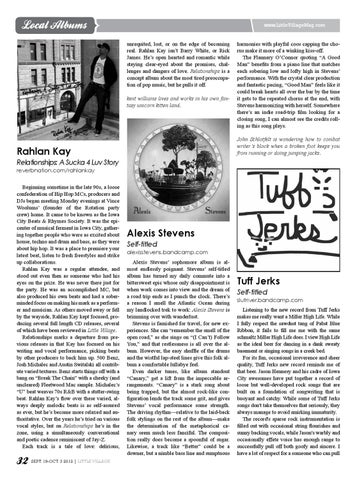 unrequited, lost, or on the edge of becoming real. Rahlan Kay isn’t Barry White, or Rick James. He’s open hearted and romantic while staying clear-eyed about the promises, challenges and dangers of love. Relationships is a concept album about the most tired preoccupation of pop music, but he pulls it off. kent williams lives and works in his own fantasy unicorn kitten land.

harmonies with playful coos capping the chorus make it more of a winking kiss-off. The Flannery O’Connor quoting “A Good Man” benefits from a piano line that matches each sobering low and lofty high in Stevens’ performance. With the crystal clear production and fantastic pacing, “Good Man” feels like it could break hearts all over the bar by the time it gets to the repeated chorus at the end, with Stevens harmonizing with herself. Somewhere there’s an indie road-trip film looking for a closing song, I can almost see the credits rolling as this song plays. John Schlotfelt is wondering how to combat writer’s block when a broken foot keeps you from running or doing jumping jacks.

Rahlan Kay Relationships: A Sucka 4 Luv Story reverbnation.com/rahlankay Beginning sometime in the late 90s, a loose confederation of Hip Hop MCs, producers and DJs began meeting Monday evenings at Vince Woolums’ (founder of the Rotation party crew) home. It came to be known as the Iowa City Beats &amp; Rhymes Society. It was the epicenter of musical ferment in Iowa City, gathering together people who were as excited about house, techno and drum and bass, as they were about hip hop. It was a place to premiere your latest beat, listen to fresh freestyles and strike up collaborations. Rahlan Kay was a regular attendee, and stood out even then as someone who had his eyes on the prize. He was never there just for the party. He was an accomplished MC, but also produced his own beats and had a soberminded focus on making his mark as a performer and musician. As others moved away or fell by the wayside, Rahlan Kay kept focused, producing several full length CD releases, several of which have been reviewed in Little Village. Relationships marks a departure from previous releases in that Kay has focused on his writing and vocal performance, picking beats by other producers to back him up. 500 Benz, Josh Michalec and Austin Switalski all contribute varied textures. Benz starts things off with a bang on “Break The Chain” with a cheeky (and uncleared) Fleetwood Mac sample. Michalec’s “U” beat weaves 70s R&amp;B with a stutter-swing beat. Rahlan Kay’s flow over these varied, always deeply melodic beats is as self-assured as ever, but he’s become more relaxed and authoritative. Over the years he’s tried on various vocal styles, but on Relationships he’s in the zone, using a simultaneously conversational and poetic cadence reminiscent of Jay-Z. Each track is a tale of love: delirious,

Alexis Stevens Self-titled alexisstevens.bandcamp.com Alexis Stevens’ sophomore album is almost endlessly poignant. Stevens’ self-titled album has turned my daily commute into a bittersweet epic whose only disappointment is when work comes into view and the dream of a road trip ends as I punch the clock. There’s a reason I smell the Atlantic Ocean during my landlocked trek to work: Alexis Stevens is brimming over with wanderlust. Stevens is famished for travel, for new experiences. She can “remember the smell of the open road,” as she sings on “(I Can’t) Follow You,” and that restlessness is all over the album. However, the easy shuffle of the drums and the wistful lap-steel lines give this folk album a comfortable lullabye feel. Even darker tunes, like album standout “Canary,” get a lift from the impeccable arrangements. “Canary” is a stark song about being trapped, but the almost rock-like configuration lends the track some grit, and gives Stevens’ vocal performance some strength. The driving rhythm—relative to the laid-back folk stylings on the rest of the album—make the determination of the metaphorical canary seem much less fanciful. The composition really does become a spoonful of sugar. Likewise, a track like “Better” could be a downer, but a nimble bass line and sumptuous

Tuff Jerks Self-titled slutriver.bandcamp.com Listening to the new record from Tuff Jerks makes me really want a Miller High Life. While I fully respect the sawdust tang of Pabst Blue Ribbon, it fails to fill me me with the same schmaltz Miller High Life does. I view High Life as the ideal beer for dancing in a dank sweaty basement or singing songs in a creek bed. For its fun, occasional irreverence and sheer quality, Tuff Jerks new record reminds me of that beer. Jason Hennesy and his cadre of Iowa City awesomes have put together a record of loose but well-developed rock songs that are built on a foundation of songwriting that is buoyant and catchy. While some of Tuff Jerks songs don&#39;t take themselves that seriously, they always manage to avoid smirking immaturity. The record&#39;s sparse rock instrumentation is filled out with occasional string flourishes and sunny backing vocals, while Jason&#39;s warbly and occasionally effete voice has enough range to successfully pull off both goofy and sincere. I have a lot of respect for a someone who can pull 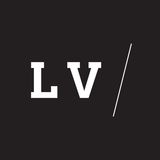