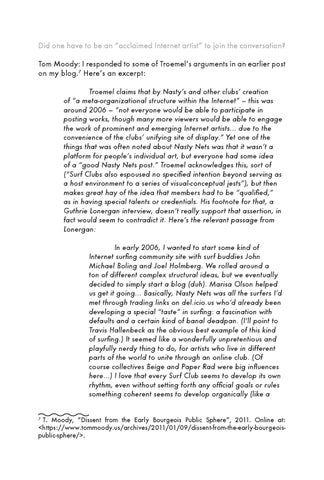 Did one have to be an “acclaimed Internet artist” to join the conversation? Tom Moody: I responded to some of Troemel’s arguments in an earlier post on my blog.7 Here’s an excerpt: Troemel claims that by Nasty’s and other clubs’ creation of “a meta-organizational structure within the Internet” – this was around 2006 – “not everyone would be able to participate in posting works, though many more viewers would be able to engage the work of prominent and emerging Internet artists... due to the convenience of the clubs’ unifying site of display.” Yet one of the things that was often noted about Nasty Nets was that it wasn’t a platform for people’s individual art, but everyone had some idea of a “good Nasty Nets post.” Troemel acknowledges this, sort of (“Surf Clubs also espoused no specified intention beyond serving as a host environment to a series of visual-conceptual jests”), but then makes great hay of the idea that members had to be “qualified,” as in having special talents or credentials. His footnote for that, a Guthrie Lonergan interview, doesn’t really support that assertion, in fact would seem to contradict it. Here’s the relevant passage from Lonergan: In early 2006, I wanted to start some kind of Internet surfing community site with surf buddies John Michael Boling and Joel Holmberg. We rolled around a ton of different complex structural ideas, but we eventually decided to simply start a blog (duh). Marisa Olson helped us get it going... Basically, Nasty Nets was all the surfers I’d met through trading links on del.icio.us who’d already been developing a special “taste” in surfing: a fascination with defaults and a certain kind of banal deadpan. (I’ll point to Travis Hallenbeck as the obvious best example of this kind of surfing.) It seemed like a wonderfully unpretentious and playfully nerdy thing to do, for artists who live in different parts of the world to unite through an online club. (Of course collectives Beige and Paper Rad were big influences here...) I love that every Surf Club seems to develop its own rhythm, even without setting forth any official goals or rules something coherent seems to develop organically (like a T. Moody, “Dissent from the Early Bourgeois Public Sphere”, 2011. Online at: &lt;https://www.tommoody.us/archives/2011/01/09/dissent-from-the-early-bourgeoispublic-sphere/&gt;. 7

The Surfer's Conspiracy. Investigating with Tom Moody digs deep into Surfing Clubs and the way they turned the practice of appropriation into a natural attitude, with the help of one of the most active surfers and of the best critical voices in this scene. This publication is a spin-off of the book project Cloning Aura. Art in the Age of Copycats, by Chiara Moioli: an essay that explores the close relation between practices of appropriation an, going through Postmodernism, 70s-80s subcultural movements, net.art and the Surfing Club generation. Chiara Moioli is an artist and researcher. More info: http://imsoemptyilikememes.tumblr.com/ 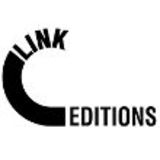