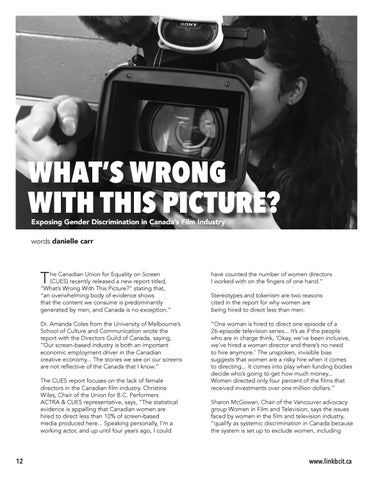 he Canadian Union for Equality on Screen (CUES) recently released a new report titled, “What’s Wrong With This Picture?” stating that, “an overwhelming body of evidence shows that the content we consume is predominantly generated by men, and Canada is no exception.”

have counted the number of women directors I worked with on the fingers of one hand.”

Dr. Amanda Coles from the University of Melbourne’s School of Culture and Communication wrote the report with the Directors Guild of Canada, saying, “Our screen-based industry is both an important economic employment driver in the Canadian creative economy... The stories we see on our screens are not reflective of the Canada that I know.”

“One woman is hired to direct one episode of a 26-episode television series... It’s as if the people who are in charge think, ‘Okay, we’ve been inclusive, we’ve hired a woman director and there’s no need to hire anymore.’ The unspoken, invisible bias suggests that women are a risky hire when it comes to directing... It comes into play when funding bodies decide who’s going to get how much money... Women directed only four percent of the films that received investments over one million dollars.”

The CUES report focuses on the lack of female directors in the Canadian film industry. Christine Wiles, Chair of the Union for B.C. Performers ACTRA & CUES representative, says, “The statistical evidence is appalling that Canadian women are hired to direct less than 10% of screen-based media produced here... Speaking personally, I’m a working actor, and up until four years ago, I could

Stereotypes and tokenism are two reasons cited in the report for why women are being hired to direct less than men:

Sharon McGowan, Chair of the Vancouver advocacy group Women in Film and Television, says the issues faced by women in the film and television industry, “qualify as systemic discrimination in Canada because the system is set up to exclude women, including