Bring Out Your Lace 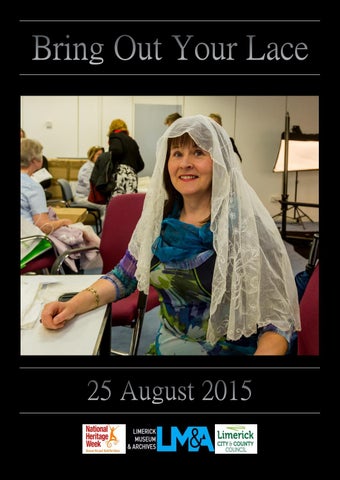 As part of National Heritage Week 2015, Limerick Museum and Archives asked the public to bring out their lace to a show and tell event on Tuesday 25th August 2015 in City Hall, Limerick.

Limerick lace is a type of hand embroidery on net using either a needle or hook. It originated in Limerick, Ireland in 1829. Limerick Tambour uses a small hook while Limerick Needle Run uses a needle. Many pieces contain both tambour and needle run lace. The net is first stretched across a large frame like a tambourine. The original design is drawn on paper and copied onto pattern sheet and pinned in front of the worker underneath the net. Stitches are then worked on to the net using a fine cotton thread.

Story 1: This piece of Tambour and Needle Run lace was given by Lady Clarina to Mary Conway (Grandaunt of Noreen Fitzgerald, Clarina) to wear on her wedding day. Mary worked for Lady Clarina. The veil was also worn by Noreenâ&amp;#x20AC;&amp;#x2122;s mother at her communion and later at her confirmation in 1951 and has been stored since.

“She did no housework, only made lace”

Story 2: This selection of patterns were owned by Catherine Galvin (nee Stokes) (1895-1970) who made lace between to 1912 and 1960s. Catherine attended St Joseph’s School where she was taught lace making and she went on to teach lace in the school. Her granddaughter Catherine Kennedy, Rhebogue relates how her grandmother fed her family through her lacemaking when her husband died young. She sold a lot of her lace on the American market through Virginia Lynch in Boston. “She always sat by a window making the lace and had a lot of thimbles”.

Story 3: These place mats of Needle Run lace were brought in by Ursula Foley, Clareview. They were made in the 1950s by Mary Heenan (nee Whelan) (19071959). Mary was taught to make lace by Dorothy Stewart in the“Red Tech” in O’Connell Avenue. She made lace at in her dining room at home and took orders from Todds and from her husband’s shop in Bedford Row. Her husband built the lace frame that she used. Each piece sold mostly to tourists for 17 shillings and 6 pence.

Story 4: This large piece of Limerick Lace has both Tambour and Needle Run Stitches it was possibly worn as a veil or shawl. (183cm x 189cm). A family friend of Eileen Oâ&amp;#x20AC;&amp;#x2122;Connor, Woodview found this piece in her home.

Story 5: This shawl also brought in by Eileen Oâ&amp;#x20AC;&amp;#x2122;Connor, Woodview, is made entirely of Limerick Tambour lace.

Story 7: These altar fringes are an example of the major ecclesiastical collections of Limerick Lace. Eileen Oâ&amp;#x20AC;&amp;#x2122;Connor, Woodview

Story 8: This communion dress and veil were made in 1926 by Eileen Oâ&amp;#x20AC;&amp;#x2122;Flanagan (1895-1969). The dress is of Limerick Tambour Lace and was made for her own daughter for her first communion and it was also worn by younger children. Eileen created her own patterns and had her own frame at home. She taught lace making in the Good Shepherd Convent and sold it to Todds and to America. This piece is owned by Grainne Oâ&amp;#x20AC;&amp;#x2122;Connell, Mayorstone

Story 9: This christening gown of Tambour lace was made in 1947. It was bought in Limerick and worn by 3 generations - 16 babies have now been christened in this gown. Last person to be christened in it was the granddaughter of Lily Hackett, Newport.

Story 11: Nora O’Connor made this piece of Needle Run lace herself in for “A touch of Limerick Lace” competition.

This piece was made in the 1970s by Nora Oâ&amp;#x20AC;&amp;#x2122;Connor when she took up lacemaking as a hobby. She was taught lacemaking in Limerick Senior College under Dolly Stewart.

Story 13: This piece of Needle Run was made in the 19th century for the Jesuit order. The Jesuits gave it to a lady with arthritis who then gave it to the mother of Grania Preston, Adare

Story 14: This Alba of Needle Run lace was made in 1951 by Lena McGrath for her son-in-law’s brother’s ordination in Australia. When he died 60 years later it was sent back to Kathleen McCaffrey, Ballysimon Road.

Story 15: This dress possibly a christening gown was bought by Ann Liston, Corbally in George Stackpooleâ&amp;#x20AC;&amp;#x2122;s antique shop in Cecil Street to dress an antique doll.

Story 15: This veil was made in the 1930s and was worn by Fidelma Cosgrave, Castletroy for both her communion and her wedding.

Story: 16 Object Type: Christening dress, Poss. 1930s Type of Lace: Tambour Other Details: Made in Irish town, given to Pauline when her daughter was born 35 years ago.

Story 15a: This christening of blouse is detailed with Irish Crochet in Rose and Shamrock design with Holy Cross Windows edging. It was made in 1985 by Fidelma Cosgrave. The materials cost ÂŁ16 and it was last worn by her grand-nephew.

Story 17: Mary Nihill, Clonlara inherited this christening gown from her mother. Ms Downes in St Joseph Street made an undergarment for this gown.

Story 18 This Alb was made for the Redemptorist Order by Dina Grant. It took her several years to make. The piece is owned by Ailish Fitzgerald, Askeaton

STORY 19: THIS CHRISTENING GOWN OF NEEDLE RUN LACE WAS WORN BY THE GRANDFATHER AND MOTHER OF PATTIE PUNCH. IT WAS MADE AROUND 1900.

Story 20: This Needle Run shawl was made in the Good Shepherd Convent in 1943. It was worn by Patti Punch, Patrickswell on her communion.

Story 21: In May 1899 Molly Ryan created this stunning lace sampler. It shows a variety of stitches. Molly was the grandmother of Mary Kennedy, Ballycummin and she a lace teacher at the turn of the last century.

Story 22: This piece was made by Molly Ryan, it is not Limerick lace but is possibly bobbin. Mary Kennedy, Ballycummin

STORY 23: THESE TWO PINAFORES OF TAMBOUR LIMERICK LACE WERE GIVEN TO DOLORES BENSON, ENNIS ROAD, AS A GIFT FROM HER AUNT ITA MCINERNEY. ITA WAS REARED IN SCOTLAND BUT RETURNED TO IRELAND AT 16.

Story 24: This handkerchief of Tambour lace was also given to Dolores by her aunt Ita. The piece is missing its centre which was probably made of linen.

Story 25: The christening robe of Tambour lace was made in 1941. It was worn by all the family of Gerdie Ryan, City Centre. The under skirt contains a band of machine made Limerick lace.

Story 26: This set of pillow cases were made in the 1970s by nuns in Sligo as a wedding present to Moira Flannagan, Clareview. It is an example of Tatting, which is a form of lace using a series of knots and loops.

STORY 27: A VEIL OF NEEDLE RUN LIMERICK LACE WHICH THE GRAND AUNT OF ANN BRADSHAW, RAHEEN, MS MCCLOHESSY SENT TO HER IN ENGLAND.

Story 28: This tablecloth was made in the Good Shepherd Convent by the Widow Clohessy. It is an example of bobbin lace. Ann Bradshaw, Raheen

Story 29: These shawls of Needle Run Lace were possibly made by Mary McNamara of Cathedral Place. They came into Dorothy McLoughlin of Clonlara’s, family 20 years ago as a gift from Mary McNamara who was Dorothy’s grandmother’s friend. The edging is in the Carrickmacross style.

Story 31: This veil of Limerick lace created in 1942 possibly by Mrs Moore of Goats Lane, Garryowen. It has been used for five First Communions. Deirdre Fallon, Lisnagry

Story 33: A collar of Tambour Lace with Needle Run which has“always been in the family”: Caroline O’Brien, City Centre

Story 34: A beautiful veil of delicate Tambour Lace with silk thread roaching effect created about 1920. “It has always been in the family though never worn”: Caroline O’Brien, City Centre

Story 35 This tablecloth belonged to Mary Ann Ryan, grandaunt of Maureen Deegan, Annacotty, but possibly originally owned by Mary Annâ&amp;#x20AC;&amp;#x2122;s mother. It has been passed down through family. It may be an example of Irish Whitework.

Story 38: This christening robe was first worn by Vivienne Manifold Clancy, Birdhill in 1941. It was created using an embroidered machine. It was also worn by Vivienneâ&amp;#x20AC;&amp;#x2122;s younger sisters.

Story 39: This christening gown was made around 1900 it is an early example of machine made lace. It was worn by Maura Oâ&amp;#x20AC;&amp;#x2122;Flaherty, Ennis Road in 1939 and by her grandchild last year.

Story 40: This possibly machine made piece of lace started off as a wedding train and was repurposed as christening robe then as a top. Maura Oâ&amp;#x20AC;&amp;#x2122;Flaherty, Ennis Road

Story 42: This christening gown was possibly made in the 1880s, it shows early examples of machine made lace. It was worn by the father of Pat Hall, Ballinacurra in 1920 it is believed that it was also worn by Patâ&amp;#x20AC;&amp;#x2122;s grandmother. It has been worn by at least 4 generations.

Story 43: This collar of Irish crochet is in a V shape, and has always been in the family of Caroline Oâ&amp;#x20AC;&amp;#x2122;Brien, City Centre

Story 44: This edging is all that remains of a handkerchief, the original would have had a centre of linen or silk. Caroline Oâ&amp;#x20AC;&amp;#x2122;Brien, City Centre

Story 45: This skirt showing a classic example of Tambour lace was bought on the side of the road by the husband of Maura Oâ&amp;#x20AC;&amp;#x2122;Flaherty, 35 years ago for ÂŁ35.

Story 46: This collection of lace samples and information was compiled in Jan 1988 as part of a business feasibility report. John Nash, Kilcornan

Bring Out Your Lace

As part of Heritage Week, Limerick Museum and Archives asked the public to Bring Out Their Lace, these are the individual pieces brought in on the day.