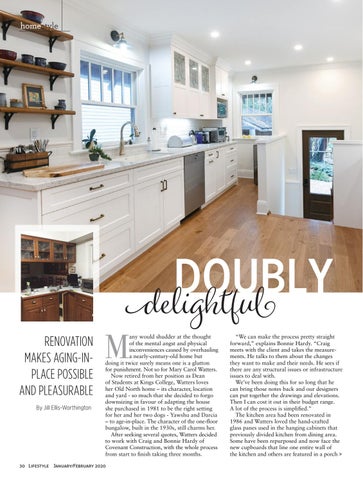 any would shudder at the thought of the mental angst and physical inconveniences caused by overhauling a nearly-century-old home but doing it twice surely means one is a glutton for punishment. Not so for Mary Carol Watters. Now retired from her position as Dean of Students at Kings College, Watters loves her Old North home – its character, location and yard - so much that she decided to forgo downsizing in favour of adapting the house she purchased in 1981 to be the right setting for her and her two dogs - Yawshu and Darcia – to age-in-place. The character of the one-floor bungalow, built in the 1930s, still charms her. After seeking several quotes, Watters decided to work with Craig and Bonnie Hardy of Covenant Construction, with the whole process from start to finish taking three months.

“We can make the process pretty straight forward,” explains Bonnie Hardy. “Craig meets with the client and takes the measurements. He talks to them about the changes they want to make and their needs. He sees if there are any structural issues or infrastructure issues to deal with. We’ve been doing this for so long that he can bring those notes back and our designers can put together the drawings and elevations. Then I can cost it out in their budget range. A lot of the process is simplified.” The kitchen area had been renovated in 1986 and Watters loved the hand-crafted glass panes used in the hanging cabinets that previously divided kitchen from dining area. Some have been repurposed and now face the new cupboards that line one entire wall of the kitchen and others are featured in a porch 