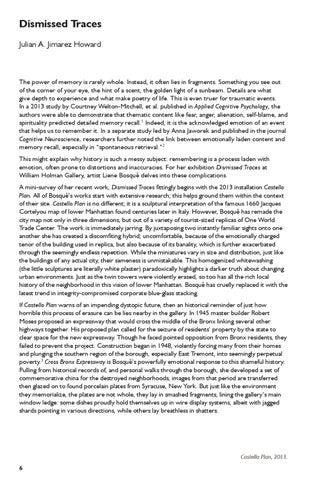 The power of memory is rarely whole. Instead, it often lies in fragments. Something you see out of the corner of your eye, the hint of a scent, the golden light of a sunbeam. Details are what give depth to experience and what make poetry of life. This is even truer for traumatic events. In a 2013 study by Courtney Welton-Mitchell, et al. published in Applied Cognitive Psychology, the authors were able to demonstrate that thematic content like fear, anger, alienation, self-blame, and spirituality predicted detailed memory recall.1 Indeed, it is the acknowledged emotion of an event that helps us to remember it. In a separate study led by Anna Jaworek and published in the journal Cognitive Neuroscience, researchers further noted the link between emotionally laden content and memory recall, especially in “spontaneous retrieval.”2 This might explain why history is such a messy subject: remembering is a process laden with emotion, often prone to distortions and inaccuracies. For her exhibition Dismissed Traces at William Holman Gallery, artist Liene Bosquê delves into these complications. A mini-survey of her recent work, Dismissed Traces fittingly begins with the 2013 installation Castello Plan. All of Bosquê’s works start with extensive research; this helps ground them within the context of their site. Castello Plan is no different; it is a sculptural interpretation of the famous 1660 Jacques Cortelyou map of lower Manhattan found centuries later in Italy. However, Bosquê has remade the city map not only in three dimensions, but out of a variety of tourist-sized replicas of One World Trade Center. The work is immediately jarring. By juxtaposing two instantly familiar sights onto one another she has created a discomfiting hybrid; uncomfortable, because of the emotionally charged tenor of the building used in replica, but also because of its banality, which is further exacerbated through the seemingly endless repetition. While the miniatures vary in size and distribution, just like the buildings of any actual city, their sameness is unmistakable. This homogenized whitewashing (the little sculptures are literally white plaster) paradoxically highlights a darker truth about changing urban environments. Just as the twin towers were violently erased, so too has all the rich local history of the neighborhood in this vision of lower Manhattan. Bosquê has cruelly replaced it with the latest trend in integrity-compromised corporate blue-glass stacking. If Castello Plan warns of an impending dystopic future, then an historical reminder of just how horrible this process of erasure can be lies nearby in the gallery. In 1945 master builder Robert Moses proposed an expressway that would cross the middle of the Bronx linking several other highways together. His proposed plan called for the seizure of residents’ property by the state to clear space for the new expressway. Though he faced pointed opposition from Bronx residents, they failed to prevent the project. Construction began in 1948, violently forcing many from their homes and plunging the southern region of the borough, especially East Tremont, into seemingly perpetual poverty.3 Cross Bronx Expressway is Bosquê’s powerfully emotional response to this shameful history. Pulling from historical records of, and personal walks through the borough, she developed a set of commemorative china for the destroyed neighborhoods, images from that period are transferred then glazed on to found porcelain plates from Syracuse, New York. But just like the environment they memorialize, the plates are not whole, they lay in smashed fragments, lining the gallery’s main window ledge: some dishes proudly hold themselves up in wire display systems, albeit with jagged shards pointing in various directions, while others lay breathless in shatters.