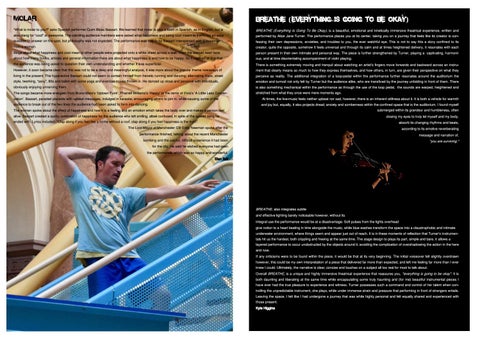 “What is molar to you?” asks Spanish performer Quim Bicas Bassart. We learned that molar is also a tooth in Spanish, as in English, but is

BREATHE (Everything Is Going To Be Okay), is a beautiful, emotional and kinetically immersive theatrical experience, written and

also slang for “cool” or awesome. The standing audience members were asked what happiness and being cool meant to them, not an easy

performed by Alice Jane Turner. The performance places you at its center, taking you on a journey that feels like its creator is con-

question to answer on the spot, but philosophy was not expected. The performance was mainly by Bassart interspersed with a voiceover

fessing their own depressions, anxieties, and troubles to you, the ever watchful eye. This is not to say this a story confined to its

creator, quite the opposite, somehow it feels universal and through its calm and at times heightened delivery, it resonates with each

Blogs about what happiness and cool mean to other people were projected onto a white sheet across a wall. Then the woman read facts

person present in their own intimate and personal way. The piece is further strengthened by Turner, playing a captivating, harmoni-

about how many books, articles and general information there are about what happiness is and how to be happy. So it seemed at first that

ous, and at time disorientating accompaniment of violin playing.

the audience was being asked to question their own understanding and whether it was superficial.

There is something extremely moving and tranquil about watching an artist&#39;s fingers move forwards and backward across an instru-

However, it soon became clear that this was not to be a deep and meaningful analysis, it was more about the popular theme nowadays of

ment that clearly means so much to how they express themselves, and how others, in turn, are given their perspective on what they

living in the present. The hyperactive Bassart could not seem to contain himself from frenetic running and dancing; alternating disco, street

perceive as reality. The additional integration of a loop-pedal within the performance further resonates around the auditorium the

style, twerking, “sexy”, 80s and ballet with some yoga and exercise moves thrown in. He danced up close and personal with individuals,

emotion and turmoil not only felt by Turner but the audience alike, who are transfixed by the journey unfolding in front of them. There

is also something mechanical within the performance as through the use of the loop pedal, the sounds are warped, heightened and

stretched from what they once were mere moments ago.

sation’. Bassart, paraded placards with upbeat messages, indulged in karaoke, encouraging others to join in, while causing some of the audience to break out of the two lines the audience had been asked to form into dancing.

At times, the live-music feels neither upbeat nor sad, however, there is an inherent stillness about it. It is both a vehicle for warmth and joy but, equally, it also projects dread, anxiety and somberness within the confined space that is the auditorium. I found myself submerged within its grandeur and humbleness, often

The woman spoke about the effect of happiness and how it is a feeling and an emotion which takes the body over and makes a person feel alive. Bassart created a quirky celebration of happiness for the audience who left smiling, albeit confused, in spite of the quieter song he

closing my eyes to truly let myself and my body,

absorb its changing rhythms and beats,

The Lord Mayor of Manchester Cllr Eddy Newman spoke after the

according to its emotive reverberating

message and narration of,

bombing and the painful, difficult experience it had been

for the city. He said he wished everyone had seen the performance, which was so happy and wonderful.

BREATHE, also integrates subtle and effective lighting barely noticeable however, without its

integral use the performance would be at a disadvantage. Soft pulses from the lights overhead give notion to a heart beating in time alongside the music, while blue washes transform the space into a claustrophobic and intimate underwater environment, where things seem and appear just out of reach. It is in these moments of reflection that Turner&#39;s instrumentals hit us the hardest, both crippling and freeing at the same time. The stage design to plays its part, simple and bare, it allows a layered performance to occur unobstructed by the objects around it, avoiding the complication of overshadowing the action in the here and now. If any criticisms were to be found within the piece, it would be that at its very beginning. The initial voiceover felt slightly overdrawn however, this could be my own interpretation of a piece that delivered far more than expected, and left me feeling far more than I ever knew I could. Ultimately, the narrative is clear, concise and touches on a subject all too real for most to talk about. Overall BREATHE, is a unique and highly immersive theatrical experience that reassures you, &quot;everything is going to be okay&quot;. It is both daunting and liberating at the same time while encapsulating some truly haunting and (for me) beautiful instrumental pieces I have ever had the true pleasure to experience and witness. Turner possesses such a command and control of her talent when controlling the unpredictable instrument, she plays, while under immense strain and pressure that performing in front of strangers entails. Leaving the space, I felt like I had undergone a journey that was while highly personal and felt equally shared and experienced with those present. Kyle Higgins

The Daily Newspaper for Saturday 8th July, reviewing the performances of Friday 7th. 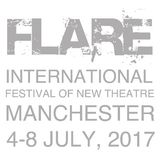