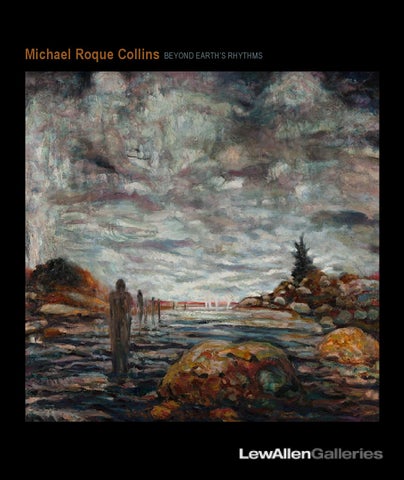 Michael Roque Collins BEYOND EARTH’S RHYTHMS Collins plumbs in the new series the strum und drang of forces that shape and alter the earth: the ebb and flow of tides, stutter of tectonic plates, transfigurations brought on by the polarities of drought and flood, fire and ice, kinesis and dormancy. The visual impressions he adduces in the process, referencing intense forces of change, are rendered as evocations more than depictions, equivocal allusions as distinguished from distinct representations. For Collins, there is always meaning in mystery.

In his newest body of oil paintings on canvas, the internationally recognized expressionist and post symbolist artist Michael Roque Collins enters upon a mystical relationship with the earth and of nature. Exploring the entropies building and destroying the external world to open vistas to understanding the tumult of the inner one, Collins’ newest body of work forms a kind of visual poetry fro comprehending the ways in which growth and regeneration can result from contending forces, both within the natural and psychological landscapes.

With characteristic painterly vivacity, the artist portrays the opposing elements like cosmic knights jousting to win either decay and destruction or rebirth and renewal. The profound truth that ranges between images of apocalyptic inferno and mystical tranquility is that these forces engage in constant cycles of generation. In the entropy of the earth (and, by extension, within the human psyche) the symbiosis of opposing forces in conflict is unearthed as more the way of regeneration than something frightening, catalyzing and ultimately transcendent rather than repressive and necessarily doomed.

Beyond Earth’s Rhythms, the artist’s 50th career solo exhibition, represents for Collins an epiphany of artistic insight variously articulated through diverse yet associated pictorial sensibilities. The facture in many of his newest paintings is delicately-rendered and dream-like, employing veils of surface wash to shroud the ambiguous elements of landscape or human figures in scrims of pigmented mystery. Works like “Venetian Lagoon” and “Geyser” are subconscious illustrations of lightness soaring out from darkness. “Standing Among the Moorings,” “Rivers Divide,” and “Crossing Twilight,” for example, evoke an ethereal journey toward spiritual transcendence.

These cryptic images of the earth in ferment carry insinuations of the metaphorical, correlative associations between antagonistic forces of nature and similarly opposing conflicts existing within the psychological. Though metaphor is impelled but subtly in these newest works the possibility of analogy is unmistakable and seductive. Knowledge that new growth will emerge from fire ravaging the land resonates with the hope that renewed well-being can follow stygian time of personal despair. Just as volcanoes and ice shape mountains and plains, so also the pushes and pulls of emotional strife render the contours of personality and character.

Other new works, such as “Inland Journey,” “Volcano II,” “Branching Fire,” and “Industrial Garden,” lure the viewer into complex picture spaces rich with texture and explosions of incendiary color, suggesting eruptions or flaring plumes of red hot magma. Evincing a studied relationship to the metaphorical agency of fire and water, the exhibition finds the artist rendering geysers as they erupt toward the heavens in pictures like “Blooming at the Banks,” and “Wading Above the Swallows Urn,” as though emanations of the holy. The geologic and the architectonic overlap in frenzies and stabs of paint. Constructed forms of decay and erode as in “Falling from the Ruins,” and “After the Moonlight II”—suggesting the persistence of nature in the absence of human action.

Collins has always been fascinated by connections he intuits between the world incarnate and the life of the mind. His work has long and imaginatively grappled with myth and story to suggest realities 2

within the human condition. In this body of work, Collins reaches new heights as a post-symbolist, effectively using the images and landforms and events of geological disturbance to suggest opportunities for comparison within the human psyche. These suggestions are more gleams of intimation than overt pictorial declarations—expressions made visually for the sake of an absolute in language we have yet to learn. But the vagueness here is born of the ethereal and conveys the sense of the provocative. As Wallace Stevens said of poetry, in the unique imagery of a Collins painting: “[T]he real is constantly being engulfed in the unreal.” The effect is to propose connections between terrestrial and psychological oppositions as means for understanding the cyclical nature of evolution within both realms.

strife. In them, dream and reality mingle freely to delight an provoke. They bear personal witness to the phenomena of conflict rather than the depiction of particular unrest. They gesture at nihilism but ultimately resist in favor of the ardent promise of redemption. These are works that comprise an art that perhaps ultimately declares less than it suggests. Enigma is as much his tool here as brush or palette, and Collins compels each towards a profound journey into realms beneath the surface, beyond the earth, past the conscious and into the sublime. In the resolution of geophysical turmoil, as well as those of a psychological variety, the artist locates the presence of divinity. In his paintings he creates a visual articulation of both the struggles and the unfolding of consequences that can lead to redemption. His is a perpetually optimistic world view. Through the flames and darkness the prospect shines for triumph of the forces of light, regenerative evolution enabled by struggle with destruction in both the inner and outer worlds. His paintings resonate a deeply held conviction that the universe proceeds on an ineluctable path toward redemption, enabled from entropic chaos challenging both man and earth. Their hopeful shadow recalls Baudelaire’s poem, in which a “lake of blood haunted by evil angels [is] shaded by a wood of evergreen pines.”

What is evident in these arresting new works is an artistic obedience to the realm of dream. The artist vividly lives the forces of internal conflict and accumulates impressions in a kind of neural sketchbook, a highly-activated amygdala where memory, imagination, emotion and experience collide in lucid dreaming. Collins has an extraordinary ability to interrogate his own subconscious and, in the words of Delacroix, “to make one see where others fail to see.” In his new paintings, Collins provides authentic visual record of his experience, mediated by dream and conscious, mystical sense of intuitive imaging for which he is renowned. Many of the new paintings read as direct dialogues with the forces of nature dramatic polemical engagements insisting that cycles of regeneration epitomize the odyssey of man. Structuring an astronomy in reverse, the artist plumbs those mysteries closest to the earth: the night side of natural science.

Collins elucidates a firm resolve that prospects for transformation—regrowth for the earth, well-being for man-lie just beyond the fields of ravage. The challenge is to endure, to adapt, to clear the detritus of charred wood or crumbled stone and allow new forests to grow. In a similar sense within the psyche, transcendence to love, joy, wisdom, and grace comes when fear, hate, anger and guilt are grappled with and their debris cleared away with a pictorial inventiveness that esteems fantastic inventiveness that esteems fantastic flourishes of color, rhythm, and light, Collins has created from adversity powerful visual metaphors of hope that are remarkable reveries of inspiration.

The images he produces are cloaked in this pictorial analogy he proposes between entropies of both psychological and natural orders. The artist’s genius as a post-symbolist resides to a large degrees in his remarkable capacity to find expression of lived experience through a singular visual vocabulary of morphic resonance. Here, image imprints subliminal felt-experience. His paintings are effigies of his own—and every man’s—emotional and psychic

In his newest body of oil paintings on canvas, the internationally recognized expressionist and post symbolist artist Michael Roque Collins...

In his newest body of oil paintings on canvas, the internationally recognized expressionist and post symbolist artist Michael Roque Collins...