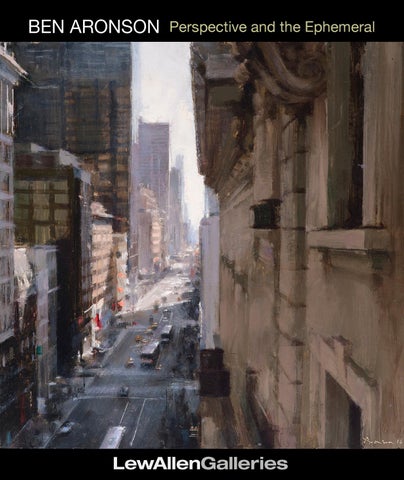 Perspective and the Ephemeral

Ben Aronson Perspective and the Ephemeral

Ben Aronson Perspective and the Ephemeral The city is like poetry: it compresses all life … much in a small space … and adds music, thus heightening its meaning … and the accompaniment of internal engines. The island of Manhattan is without any doubt the greatest human concentrate on earth, the poem whose magic is comprehensible to millions … but whose full meaning will always remain elusive. E.B. White, Here is New York (1949) Ben Aronson delights in the abundance that is the city and resoundingly embraces the lively uncertainties that mark its character. To the artist, the city is a very personal source of poetry. In his painting Aronson concentrates the city’s stories, culture, and kinetic urban energy – investing it with his own magical sense of color and light, line and form, and very importantly, gesture. In the words of the artist, the city is his “wellspring of visual ideas and input; everything in the world is there, concentrated, and comes at you like a great rushing visual tsunami.” “Perspective and the Ephemeral” is the title Aronson has given his current LewAllen exhibition of breathtaking cityscapes and lush floral still life paintings. This title suggests essential elements that are central to this brilliant artist’s unique work – elements that may be regarded and embraced on several levels. Ben Aronson is a painter of the frozen moment. He joyously captures fleeting quiescent moments in space and time. In an era when life proceeds at what seems an increasingly frantic pace – where deadlines are constant and time is accelerated – Aronson’s paintings offer an oasis – a brief moment of reflection. The paintings possess a remarkable capacity to suspend motion, slow the tempo, seduce attention and liberate regard. In his paintings, Aronson dissolves the rush and tumult of everyday life to reveal the remaining fundament of beauty in these places and things. Ben Aronson is also a painter of the transformative. His work compresses the spirit and essence of a place. Indeed, with Aronson’s uncanny technical prowess for creating illusionistic dimensional space, viewers often experience the sensation of becoming intrinsically part of the painting. The effect is exhilarating and joyful, evocative of the same spirited energy that the city itself radiates. 2

"Perspective” captures a concept that resonates with Aronson’s distinctive way of looking at urban experience. His art is inspirational in the way it fuses both realism and abstraction. The remarkable power of the work is attained through suggestiveness and illusion, rather than through slavish verisimilitude. Aronson’s personal approach orients the eye and inspires the mind – rather than seeking to portray likeness. Aronson is artistically disinterested in presenting replicas of scenes – to be viewed as some kind of visual documentation of “reality.” Rather, to inspire the viewer to experience and explore possibilities and potentials, he expands the meaning of “reality” to capture the fulsome atmospheric qualities of the experience of a city or the eloquent grace of a flower. The work is enticingly suggestive and hence, emotional. Much of Aronson’s city painting is imbued with surprising orientations and perspectives, angles and lines, unexpected color combinations in conjunction with nuanced areas of pensive dark colors and radiant light. Together these elements coalesce to create novel and alluringly evocative ways of perceiving the built environment and the world of the urbanites who dwell there. The paintings capture the intensity and the aspirations of the city – beckoning to the viewer to experience both its spirit and its soul. Aronson’s images ignite the imagination and create a vicarious accessibility to the thrill of urban life. The paintings are seductive, enticing the viewer to engage in the city’s exotic mysteries and distinct aesthetics – a beckoning call to join in the vivacious urban life with its fast paced excitement, bustling crowds, and diverse architectural statements. Aronson evokes these sentiments with a distinctive painting style that features freely rendered silhouetted figures and geometric elements that harken back to his early love of architecture as a possible calling. Harmonized colorations lend luminosity to scenes, lines articulate form without being literal, and a complex and subtle illumination activates and energizes the power of his work to arrest the viewer’s attention – almost demanding closer scrutiny – and to sustain looking. 3

Freed of perspective so definite as to preclude wonder, Aronson’s paintings dematerialize specificity to allow capacious room for contemplation and reverie. Exhilarations about the city well up that are as vast as the heart’s own immensity. Thus understood, Aronson does not paint pictures of the city; he captures his own fascinations with the city. In a way, the works seem to share commonality with memory which functions to record impressions more than sharp details of experience. Only in memory can there be meaning beyond mere sensation. His paintings – like memory – blur the boundaries between the particular and the indefinite to broaden their potential for meaning, and to evoke remembered experience of being in the city as well as excitement about what might lie ahead. On a more technical level, Aronson’s perspective relates to the artist’s masterful ability to create in a two-dimensional painting the voluptuous illusion of three dimensions. If upon first glance one is struck by how adeptly the artist’s convergence of representation and abstraction interact to freeze the moment, arrest time, and engage the eye and the mind, one is further amazed after moving closer to the cityscapes at how the paintings seem suddenly to become active and draw the viewer into the scene – almost as a participant. Upon approaching an Aronson canvas, the viewer immediately senses that somehow the image has been transformed. What moments earlier had seemed to be a gorgeous tableau – frozen in time – suddenly appears to reanimate, the action begins again and the viewer feels present and part of a painting that is alive. One can almost hear the honking horns in Taxis on Madison, feel the breezes in Cap Ferrat and Cliffs, Côte d’Azur, or bask in the warmth of Rooftops, Southern California. A lingering, delicate scent seems to waft when viewing Wild White Roses. The appearance of dimensional space emerges from the nuanced interplay of an array of illusionary artistic techniques. Among these are the adept use of linear perspective in which buildings, vehicles, and land-forms recede in relational size from foreground to background; lighting transitions vary in relative hue and value – suggesting changes in distance; and shadow, haze and other atmospheric features – with great subtlety – vary across the canvas. Pervading Aronson’s work is the omnipresence of the ephemeral. Life is short and nowhere is there 4

greater consciousness of temporality than in the fast-paced life of the city. The effect of an Aronson cityscape to adduce a sense of arrested motion is powerful precisely because it is the unexpected, though interdependent counterpoint to the inevitable transitory nature of life. Just as Aronson captures, for perpetuity, the fleeting delicacy of blossoms in his paintings, his urban landscapes forever capture a moment in the life of a city. The irony of the ephemeral in the context of the eternal is profound. The intoxicating impression of time frozen in action – and captured at a single moment – can pause the mind long enough to look closely. But upon a more intimate examination, the painting pulls the viewer in inspiring further reflection and meditation and eliciting an awareness of life’s short but exquisite possibilities. In an Aronson painting, there is the chance to find what art critic Jed Perl has called “time outside of time” – an experience that keeps viewers looking, and continues to enrich their lives by enticing them to desire to revisit the painting over and over again. The meditative sense evoked by an Aronson painting can gently offer the opportunity to ponder the mysteries of the city and its enlivening and energizing uncertainties. One might also grasp how important it is to take time – literally take time away from its fleeting passage – and to savor the beauty that is everywhere in the city and in the world. To paraphrase James Joyce, an Aronson painting “intensely regarded – may be a gate of access to the incorruptible eon of the gods.” Aronson’s city paintings are also imbued with an exquisite and delicious sense of anticipation and excitement. They bring to mind lyrics from the song “Something’s Coming” in Leonard Bernstein’s Westside Story, when Tony sings:

Something’s coming, I don’t know what…

It is that sense of optimistic hopefulness that Aronson’s sumptuous work exudes. In their frozen instants – in the stillness of their stop-motion imagery – his paintings capture the very essence of the city and allow its mythic possibilities to percolate in the imagination. Aronson’s work actively participates in the discourse of the city as American symbol. The romantic myth of the contemporary city has replaced that of the American Frontier as the province of the American Dream. The city has become the place of opportunity, where “something’s coming, something good.” While acknowledging the power of that mythic dream, Aronson’s work does not present a varnished, aggrandized view of the city. Indeed the quotidian is everywhere in his work: from crowded sidewalks to roaring taxis, from concrete abutments to the formulaic qualities of 1950s “dingbat” architecture. Aronson conjures his magical imagery through color, light, line and composition that transform the ordinary and unglamorous into orchestrations of inestimable beauty. Aronson enlivens his works in unexpected ways. Little daubs of bright red, orange, or white in details such as the cab of a speeding truck in Divided Highway, Closed Ramp, the taillight of a motor scooter in Mirrored Street on the Riviera, the tile of a Mediterranean roof in Cap Ferrat and Cliffs, Côte d’Azur, the window display of a Madison Avenue boutique in Midtown on Madison, or the headlamps of an approaching car in Summer Evening, Manhattan, are often stippled among arrays of darker greens, blues or umbers. These punctuate the pictures and further activate the sense of energy in the work. So it is that Aronson’s paintings uncannily concentrate and epitomize visual resonances of urban life. Aronson has a sorcerer-like ability to first still the frenzy of distraction in his imagery and thus prompt closer looking and reflection. Then – almost in reverse action – he activates new ways of seeing and experiencing the mysteries of urban life and the excitement of a city’s singular energy. Aronson’s paintings privilege the moment of hesitation in looking and the precious value of pausing to really grasp the powerful messages these paintings contain. Indeed, it is this remarkable capacity of Aronson’s paintings that leavens the fleeting nature of the transitory and elicits the enduring whispers of beauty that lie within. Like the poetry of the city itself, these paintings inspire the mind and stir the heart. Aronson’s paintings embody what makes the city a special place, one for which – as the beloved New York 6

writer E.B. White once observed â&#x20AC;&#x201C; someone might desire to â&#x20AC;&#x153;pull up stakes ... and come to town, seeking sanctuary or fulfillment or some greater or lesser grail.â&#x20AC;? Kenneth R. Marvel

Ben Aronson: Perspective and the Ephemeral

Ben Aronson: Perspective and the Ephemeral