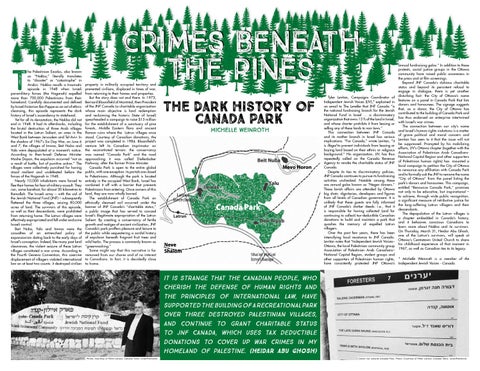 he Palestinian Exodus, also known as “Nakba,” literally translates to “disaster” or “catastrophe” in Arabic. Nakba recalls a traumatic episode in 1948 when Israeli paramilitary forces (the Haganah) expelled more than 700,000 Palestinians from their homeland. Carefully documented and defined by Israeli historian Ilan Pappe as an act of ethnic cleansing, this episode represents the dark history of Israel’s ascendancy to statehood. Yet for all its devastation, the Nakba did not end in 1948. It had its aftershocks, including the brutal destruction of three Arab villages located in the Latrun Salient, an area in the West Bank between Jerusalem and Tel-Aviv. In the shadow of 1967’s Six Day War, on June 6 and 7, the villages of Imwas, Beit Nuba and Yalo were depopulated at a moment’s notice. According to then-Israeli Defense Minister Moshe Dayan, the expulsion occurred “not as a result of battle, but of punitive action.” The villages were collectively punished for having stood resilient and undefeated before the forces of the Haganah in 1948. Nearly 10,000 inhabitants were forced to flee their homes for fear of military assault. They ran, some barefoot, for almost 30 kilometres to Ramallah. The Israeli army – with the aid of the Jewish National Fund (JNF) – subsequently flattened the three villages, seizing 80,000 acres of land. The survivors of this episode, as well as their descendants, were prohibited from returning home. The Latrun villages were effectively expropriated and fell under exclusive Israeli control. Beit Nuba, Yalo and Imwas were the casualties of an entrenched policy of expansionism dating back to the early days of Israel’s conception. Indeed, like many past land clearances, the violent seizure of these Latrun villages constituted a war crime. According to the Fourth Geneva Convention, this coercive displacement of villagers violated international law on at least two counts: it destroyed civilian

Crimes Beneath the Pines

property in militarily occupied territory and prevented civilians, displaced in times of war, from returning to their homes and properties. But the story does not end there. In 1973, Bernard Bloomfield of Montréal, then President of the JNF Canada (a charitable organization whose main objective is land redemption and reclaiming the historic State of Israel) spearheaded a campaign to raise $15 million for the establishment of a sanctuary of pine forests, Middle Eastern flora and ancient Roman ruins where the Latrun villages once stood. Courtesy of Canadian donations, the project was completed in 1984. Bloomfield’s venture left its Canadian imprimatur on the reconstituted terrain: the conservancy was named “Canada Park” and the road approaching it was called Diefenbaker Parkway, after the former Prime Minister. Canada Park is open to the entire global public, with one exception: its portals are closed to Palestinians. Although the park is located entirely in the occupied West Bank, Israel has cordoned it off with a barrier that prevents Palestinians from entering. Once owners of this land, they are now wholly barred. The establishment of Canada Park on ethnically cleansed soil occurred under the banner of JNF Canada’s “charitable status,” a public image that has served to conceal Israel’s illegitimate expropriation of the Latrun Salient. By creating a conservancy of fertile growth and vestiges of ancient civilization, JNF Canada’s park proffers pleasure and leisure to the public while sequestering a sordid history of expulsion beneath fragrant fruit trees and wild herbs. The process is commonly known as “greenwashing.” Some might say that this narrative is far removed from our shores and of no interest to Canadians. In fact, it is decidedly close to home.

annual fundraising galas.” In addition to these protests, social justice groups in the Ottawa community have raised public awareness in the press and at film screenings. Beyond JNF Canada’s dubious charitable status and beyond its persistent refusal to engage in dialogue, there is yet another disturbing fact: the City of Ottawa’s name features on a panel in Canada Park that lists donors and honourees. The signage suggests that, as a donor, the City of Ottawa has contributed to the building of Canada Park and has thus endorsed an enterprise intertwined with Israel’s war crimes. The connection between our city’s name and Israel’s human rights violations is a matter of grave political and moral concern and Levitan has seen to it that the issue will not be suppressed. Prompted by his mobilizing efforts, IJV’s Ottawa chapter (together with the Association of Palestinian Arab CanadiansNational Capital Region and other supporters of Palestinian human rights) has mounted a local campaign to petition the City of Ottawa to renounce any affiliation with Canada Park and to formally ask the JNF to remove the name “City of Ottawa” from the panel listing the park’s donors and honourees. This campaign, entitled “Renounce Canada Park,” promises not only to be educative, but inspirational – to achieve, through wide public recognition, a significant measure of retributive justice for the long-suffering Latrun villagers and their descendants. The depopulation of the Latrun villages is a chapter embedded in Canada’s history, and it behooves conscious Canadians to learn more about Nakba and its survivors. On Thursday, March 31, Heidar Abu Ghosh, one of the Latrun’s survivors, will speak at Ottawa’s Centretown United Church to share his childhood experience of that moment in 1967, as well as Canadian ties to its legacy.

Tyler Levitan, Campaigns Coordinator of Independent Jewish Voices (IJV),* explained in an email to The Leveller that JNF Canada “is the national fundraising branch for the Jewish National Fund in Israel … a discriminatory organization that owns 13 % of the land in Israel, and whose charter prohibits it from leasing or selling any of these lands to non-Jews.” This connection between JNF Canada and its mother branch in Israel has serious implications. “For Canada,” wrote Levitan, “it is illegal to prevent individuals from leasing or buying land based on their ethnic or religious background.” His organization, IJV, has thus repeatedly called on the Canada Revenue Agency to revoke the charitable status of JNF Canada. Despite its ties to discriminatory policies, JNF Canada continues to pursue its fundraising activities unchecked. Notable among these are annual galas known as “Negev dinners.” These lavish affairs are attended by Ottawa big shots: dignitaries, developers and figures from all levels of Canadian government. It is unlikely that these guests are fully informed of JNF Canada’s darker deeds: i.e., that it is responsible for having collected (and for continuing to collect) tax-deductible Canadian donations to build and maintain a park that quashes the memory of expelled Latrun villagers. Over the past few years, there has been intensifying local resistance to JNF Canada. Levitan notes that “Independent Jewish Voices– Ottawa, the local Palestinian community group Association of Palestinian Arab Canadians– National Capital Region, student groups and other supporters of Palestinian human rights, * Michelle Weinroth is a member of the have consistently protested JNF Ottawa’s Independent Jewish Voices - Canada.

It is strange that the Canadian people, who cherish the defense of human rights and the principles of international law, have supported the building of a recreational park over three destroyed Palestinian villages, and continue to grant charitable status to JNF Canada, which uses tax deductible donations to cover up war crimes in my homeland of Palestine. (Heidar Abu Ghosh) Photo: Courtesy of Peter Larson, Canada Talks: Israel­Palestine.

The Leveller is a publication covering campus and off-campus news, current events, and culture in the Ottawa area and elsewhere. It is intended to provide readers with a lively portrait of their universities and communities and of the events that give them meaning. It is also intended to be a forum for provocative editorializing and lively debate on issues of concern to students, staff, and faculty as well as Ottawa residents.