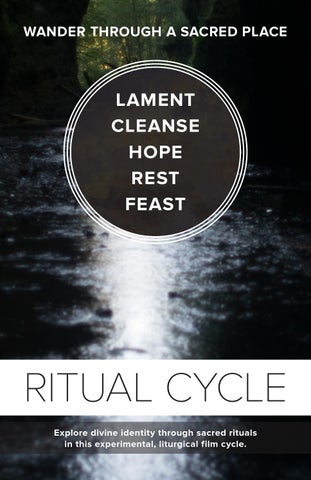 WANDER THROUGH A SACRED PLACE

“Ritual Cycle” is a series of five experimental films intended to be viewed together as a gallery installation. The piece is an exploration of the divine through five unique rituals created specifically for the films. Each ritual (Lament, Cleanse, Hope, Rest, and Feast) centers on a discrete facet of the concept of divinity, including the feminine and genderqueer divine. The piece provides viewers with a safe space—a thin space— in which to meditate and explore the emotions generated by each of the films.

M OTHER GODDE A RITUAL OF LAMENT

“Mother Godde” is a quiet, mournful meditation, which uses the backdrop of barren desert and ritual to explore sorrow and loss through the eyes of the divine. It explores the concept of Godde as undeniably feminine and as a grief-stricken mother. Featuring Tanja David.

I NTERIM IGNIS A RITUAL OF CLEANSING

A dance of divine identity and action in this strange and beautiful rite of cleansing. Godde separate from Godde is inevitably, magnetically pulled back into union and embrace. Two dancers and a drummer meet within an isolated, abandoned warehouse space to perform a fiery ritual. Featuring Benjamin Taylor, Eric Dyrhsen and David â&amp;#x20AC;&amp;#x153;Hamboneâ&amp;#x20AC;? Raven.

A RITUAL OF HOPE

One sister is enchanted by hope, tending the flames, exploring with delight. One sister is consumed with hope, bound and weighed down. Godde hoping against hope; captivated by beautiful potential. Featuring Angelina Prendergast and Poonam Basu.

WASSERSTILLE A RITUAL OF REST

A gentle dance between the divine and nature, celebrating the body and the beauty of rest. An exploration of fluidity and of identity beyond binaries. Equipped with a mossy censor, a dancer moves gently through stunning natural landscapes, celebrating the deep beauty of earth, of their body, and of finding perfect rest. Featuring Jodi Walsh.

A RITUAL OF FEASTING IN PRE-PRODUCTION

A celebration of divinity as joyful and communal. Bursting from a forest, the divine—personified by four people—races joyfully through a meadow. The four find themselves at an ancient table, where they share a ritualistic meal, moving in rhythm and harmony with each other. … [ images are concept ]

RITUAL INSTALLATION â&amp;#x20AC;&amp;#x153;Ritual Cycleâ&amp;#x20AC;? is a series of five experimental films intended to be viewed together as a gallery installation. The space provides viewers a safe space in which to meditate and explore the emotions generated by experiencing each of the films. The physical installation is comprised of five screening chambers arrayed evenly around a central hub in which viewers can decompress and converse. Lights hung from cables attached to each chamber descend into the center of the space to create a warm, contemplative space.

The space allows viewers to decompress and have space to participate in simple rituals arranged around a silver bowl placed on a pedestal. Each chamber is designed to complement the film it houses in a simple and distinct way. While there is a suggested viewing order, visitors are welcome to explore the films in their own way and at their own pace. There are five viewing chambers composed of 4â&amp;#x20AC;&amp;#x2122;x8â&amp;#x20AC;&amp;#x2122;x6â&amp;#x20AC;? panels constructed of wood, foam batting, and cloth. The panels will be joined to create chambers of varying size depending on the space in which they are shown. Each chamber will include a viewing screen and projector (with necessary technical accessories).

THE ARTISTS Scott Arany (Co-producer, Composer, Photographer and Graphic Designer) is a liturgical artist, graphic designer, musician and photographer living in Bend, OR. He is a creator of sacred space and a lover of creative, contemplative ritual that invites participants into an experience of beauty and rest. Scott has worked as a minister and graphic designer for over a decade, and earned a master’s degree in Worship, Theology and the Arts from Fuller Theological Seminary. Heather Dappolonia (Co-producer, Make-up Artist) is an award-winning filmmaker and make-up artist in Chattanooga, TN, with over 20 credits to her name, including the short film &quot;Blue,&quot; on which she served as Director of Photography. Heather has degrees in Film Production and Fine Art from Southern Adventist University. H. Leslie Foster II (Co-producer, Director, Camera) is an LAbased filmmaker and a co-founder of Traveling Muse Pictures, a non-profit film collective and is also a member of the Nomad Solstice art collective. Leslie’s passion for activism, fine art, and philosophy informs his filmmaking. He has spent over seven years in the film industry, which includes his work co-producing the 2009 Crystal Heart award-winning short film “Marbles with Thoreau.” Having grown up and worked all around the world, he thinks of himself as an urban nomad and fantasizes about joining a roving band of vagabond artists.

An overview of the Ritual Cycle experimental film installation. www.ritualcycle.com 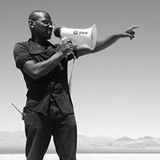