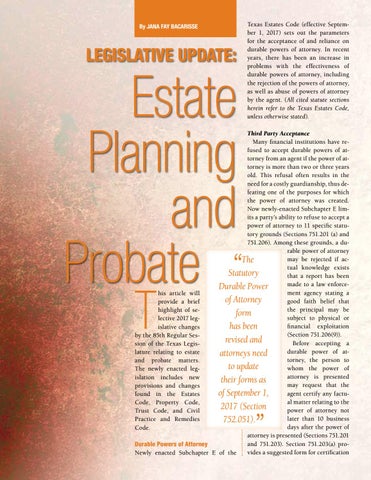 Third Party Acceptance Many financial institutions have refused to accept durable powers of attorney from an agent if the power of attorney is more than two or three years old. This refusal often results in the need for a costly guardianship, thus defeating one of the purposes for which the power of attorney was created. Now newly-enacted Subchapter E limits a party’s ability to refuse to accept a power of attorney to 11 specific statutory grounds (Sections 751.201 (a) and 751.206). Among these grounds, a durable power of attorney may be rejected if acThe tual knowledge exists Statutory that a report has been made to a law enforceDurable Power ment agency stating a his article will of Attorney good faith belief that provide a brief the principal may be highlight of seform subject to physical or lective 2017 legfinancial exploitation islative changes has been (Section 751.206(9)). by the 85th Regular Sesrevised and Before accepting a sion of the Texas Legisdurable power of atlature relating to estate attorneys need torney, the person to and probate matters. to update whom the power of The newly enacted legattorney is presented islation includes new their forms as may request that the provisions and changes agent certify any factuof September 1, found in the Estates al matter relating to the Code, Property Code, 2017 (Section power of attorney not Trust Code, and Civil later than 10 business Practice and Remedies 752.051). days after the power of Code. attorney is presented (Sections 751.201 and 751.203). Section 751.203(a) proDurable Powers of Attorney vides a suggested form for certification Newly enacted Subchapter E of the