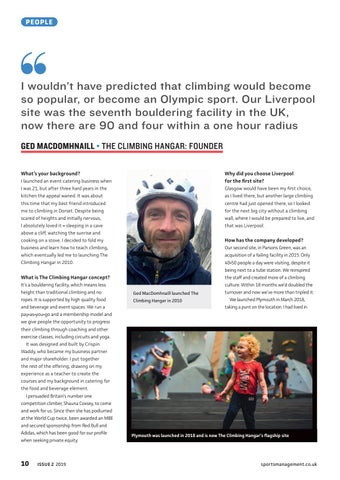 I wouldn’t have predicted that climbing would become so popular, or become an Olympic sport. Our Liverpool site was the seventh bouldering facility in the UK, now there are 90 and four within a one hour radius Ged Macdomhnaill • The Climbing Hangar: founder What’s your background? I launched an event catering business when

Why did you choose Liverpool for the first site?

I was 21, but after three hard years in the

Glasgow would have been my first choice,

kitchen the appeal waned. It was about

as I lived there, but another large climbing

this time that my best friend introduced

centre had just opened there, so I looked

me to climbing in Dorset. Despite being

for the next big city without a climbing

scared of heights and initially nervous,

wall, where I would be prepared to live, and

I absolutely loved it – sleeping in a cave

above a cliff, watching the sunrise and cooking on a stove. I decided to fold my

How has the company developed?

business and learn how to teach climbing,

Our second site, in Parsons Green, was an

which eventually led me to launching The

acquisition of a failing facility in 2015. Only

40-50 people a day were visiting, despite it being next to a tube station. We reinspired

What is The Climbing Hangar concept?

the staff and created more of a climbing

culture. Within 18 months we’d doubled the

height than traditional climbing and no

ropes. It is supported by high quality food

and beverage and event spaces. We run a

turnover and now we’ve more than tripled it. We launched Plymouth in March 2018, taking a punt on the location. I had lived in

pay-as-you-go and a membership model and we give people the opportunity to progress their climbing through coaching and other exercise classes, including circuits and yoga. It was designed and built by Crispin Waddy, who became my business partner and major shareholder. I put together the rest of the offering, drawing on my experience as a teacher to create the courses and my background in catering for the food and beverage element. I persuaded Britain’s number one competition climber, Shauna Coxsey, to come and work for us. Since then she has podiumed at the World Cup twice, been awarded an MBE and secured sponsorship from Red Bull and Adidas, which has been good for our profile when seeking private equity.