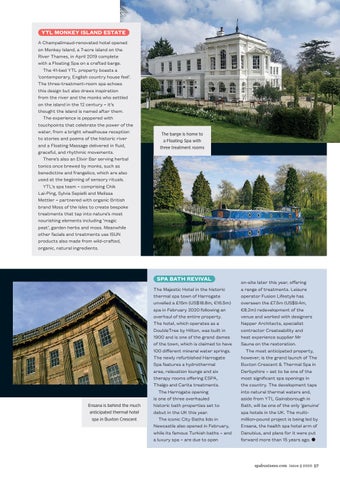 YTL MONKEY ISLAND ESTATE A Champalimaud-renovated hotel opened on Monkey Island, a 7-acre island on the River Thames, in April 2019 complete with a Floating Spa on a crafted barge. The 41-bed YTL property boasts a ‘contemporary, English country house feel’. The three-treatment-room spa echoes this design but also draws inspiration from the river and the monks who settled on the island in the 12 century – it’s thought the island is named after them. The experience is peppered with touchpoints that celebrate the power of the water, from a bright wheelhouse reception to stories and poems of the historic river and a Floating Massage delivered in fluid, graceful, and rhythmic movements. There’s also an Elixir Bar serving herbal tonics once brewed by monks, such as benedictine and frangelico, which are also used at the beginning of sensory rituals. YTL’s spa team – comprising Chik Lai-Ping, Sylvia Sepielli and Melissa Mettler – partnered with organic British brand Moss of the Isles to create bespoke treatments that tap into nature’s most nourishing elements including ‘magic peat’, garden herbs and moss. Meanwhile other facials and treatments use ISUN products also made from wild-crafted, organic, natural ingredients.

The Majestic Hotel in the historic thermal spa town of Harrogate unveiled a £15m (US$18.8m, €16.5m) spa in February 2020 following an overhaul of the entire property. The hotel, which operates as a DoubleTree by Hilton, was built in 1900 and is one of the grand dames of the town, which is claimed to have 100 different mineral water springs. The newly refurbished Harrogate Spa features a hydrothermal area, relaxation lounge and six therapy rooms offering ESPA, Thalgo and Carita treatments. The Harrogate opening is one of three overhauled historic bath properties set to debut in the UK this year. The iconic City Baths lido in Newcastle also opened in February, while its famous Turkish baths – and a luxury spa – are due to open

on-site later this year, offering a range of treatments. Leisure operator Fusion Lifestyle has overseen the £7.5m (US$9.4m, €8.2m) redevelopment of the venue and worked with designers Napper Architects, specialist contractor Createability and heat experience supplier Mr Sauna on the restoration. The most anticipated property, however, is the grand launch of The Buxton Crescent & Thermal Spa in Derbyshire – set to be one of the most significant spa openings in the country. The development taps into natural thermal waters and, aside from YTL Gainsborough in Bath, will be one of the only ‘genuine’ spa hotels in the UK. The multimillion-pound project is being led by Ensana, the health spa hotel arm of Danubius, and plans for it were put forward more than 15 years ago. l