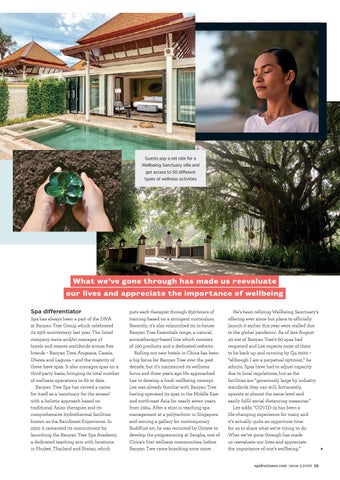 What we’ve gone through has made us reevaluate our lives and appreciate the importance of wellbeing Spa differentiator Spa has always been a part of the DNA at Banyan Tree Group which celebrated its 25th anniversary last year. The listed company owns and/or manages 47 hotels and resorts worldwide across five brands – Banyan Tree, Angsana, Cassia, Dhawa and Laguna – and the majority of these have spas. It also manages spas on a third-party basis, bringing its total number of wellness operations to 60 to date. Banyan Tree Spa has carved a name for itself as a ‘sanctuary for the senses’ with a holistic approach based on traditional Asian therapies and its comprehensive hydrothermal facilities known as the Rainforest Experience. In 2001 it cemented its commitment by launching the Banyan Tree Spa Academy, a dedicated teaching arm with locations in Phuket, Thailand and Bintan, which

puts each therapist through 650-hours of training based on a stringent curriculum. Recently, it’s also relaunched its in-house Banyan Tree Essentials range, a natural, aromatherapy-based line which consists of 100 products and a dedicated website. Rolling out new hotels in China has been a big focus for Banyan Tree over the past decade, but it’s maintained its wellness focus and three years ago Ho approached Lee to develop a fresh wellbeing concept. Lee was already familiar with Banyan Tree having operated its spas in the Middle East and north-east Asia for nearly seven years from 2004. After a stint in teaching spa management at a polytechnic in Singapore and owning a gallery for contemporary Buddhist art, he was recruited by Octave to develop the programming at Sangha, one of China’s first wellness communities, before Banyan Tree came knocking once more.

He’s been refining Wellbeing Sanctuary’s offering ever since but plans to officially launch it earlier this year were stalled due to the global pandemic. As of late August 40 out of Banyan Tree’s 60 spas had reopened and Lee expects most of them to be back up and running by Q4 2020 – “although I am a perpetual optimist,” he admits. Spas have had to adjust capacity due to local regulations, but as the facilities are “generously large by industry standards they can still, fortunately, operate at almost the same level and easily fulfil social distancing measures.” Lee adds: “COVID-19 has been a life-changing experience for many and it’s actually quite an opportune time for us to share what we’re trying to do. What we’ve gone through has made us reevaluate our lives and appreciate the importance of one’s wellbeing.” spabusiness.com issue 3 2020 29