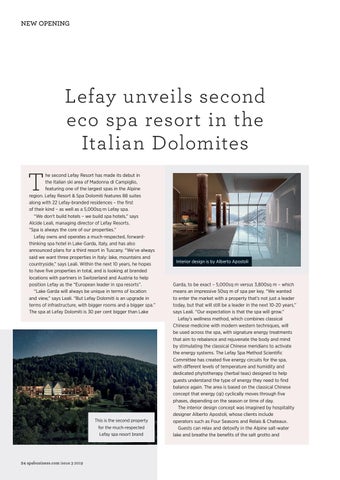 he second Lefay Resort has made its debut in the Italian ski area of Madonna di Campiglio, featuring one of the largest spas in the Alpine region. Lefay Resort &amp; Spa Dolomiti features 88 suites along with 22 Lefay-branded residences – the first of their kind – as well as a 5,000sq m Lefay spa. “We don’t build hotels – we build spa hotels,” says Alcide Leali, managing director of Lefay Resorts. “Spa is always the core of our properties.” Lefay owns and operates a much-respected, forwardthinking spa hotel in Lake Garda, Italy, and has also announced plans for a third resort in Tuscany. “We’ve always said we want three properties in Italy: lake, mountains and countryside,” says Leali. Within the next 10 years, he hopes to have five properties in total, and is looking at branded locations with partners in Switzerland and Austria to help position Lefay as the “European leader in spa resorts”. “Lake Garda will always be unique in terms of location and view,” says Leali. “But Lefay Dolomiti is an upgrade in terms of infrastructure, with bigger rooms and a bigger spa.” The spa at Lefay Dolomiti is 30 per cent bigger than Lake

Interior design is by Alberto Apostoli

Garda, to be exact – 5,000sq m versus 3,800sq m – which means an impressive 50sq m of spa per key. “We wanted to enter the market with a property that’s not just a leader today, but that will still be a leader in the next 10-20 years,” says Leali. “Our expectation is that the spa will grow.” Lefay’s wellness method, which combines classical Chinese medicine with modern western techniques, will be used across the spa, with signature energy treatments that aim to rebalance and rejuvenate the body and mind by stimulating the classical Chinese meridians to activate the energy systems. The Lefay Spa Method Scientific Committee has created five energy circuits for the spa, with different levels of temperature and humidity and dedicated phytotherapy (herbal teas) designed to help guests understand the type of energy they need to find balance again. The area is based on the classical Chinese concept that energy (qi) cyclically moves through five phases, depending on the season or time of day. The interior design concept was imagined by hospitality designer Alberto Apostoli, whose clients include operators such as Four Seasons and Relais &amp; Chateaux. Guests can relax and detoxify in the Alpine salt-water lake and breathe the benefits of the salt grotto and