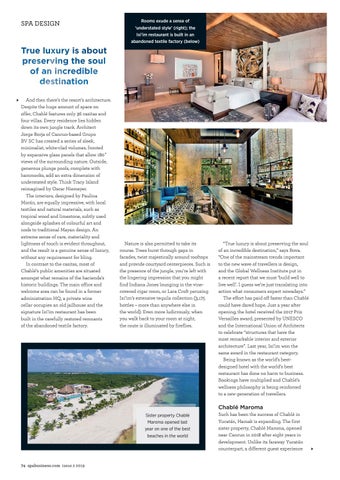 And then there’s the resort’s architecture. Despite the huge amount of space on offer, Chablé features only 36 casitas and four villas. Every residence lies hidden down its own jungle track. Architect Jorge Borja of Cancun-based Grupo BV SC has created a series of sleek, minimalist, white-clad volumes, fronted by expansive glass panels that allow 180˚ views of the surrounding nature. Outside, generous plunge pools, complete with hammocks, add an extra dimension of understated style. Think Tracy Island reimagined by Oscar Niemeyer. The interiors, designed by Paulina Morán, are equally impressive, with local textiles and natural materials, such as tropical wood and limestone, subtly used alongside splashes of colourful art and nods to traditional Mayan design. An extreme sense of care, materiality and lightness of touch is evident throughout, and the result is a genuine sense of luxury, without any requirement for bling. In contrast to the casitas, most of Chablé’s public amenities are situated amongst what remains of the hacienda’s historic buildings. The main office and welcome area can be found in a former administration HQ, a private wine cellar occupies an old jailhouse and the signature Ixi’im restaurant has been built in the carefully restored remnants of the abandoned textile factory.

Rooms exude a sense of ‘understated style’ (right); the Ixi’im restaurant is built in an abandoned textile factory (below)

Nature is also permitted to take its course. Trees burst through gaps in facades, twist majestically around rooftops and provide courtyard centerpieces. Such is the presence of the jungle, you’re left with the lingering impression that you might find Indiana Jones lounging in the vinecovered cigar room, or Lara Croft perusing Ixi’im’s extensive tequila collection (3,175 bottles – more than anywhere else in the world). Even more ludicrously, when you walk back to your room at night, the route is illuminated by fireflies.

“True luxury is about preserving the soul of an incredible destination,” says Bova. “One of the mainstream trends important to the new wave of travellers is design, and the Global Wellness Institute put in a recent report that we must ‘build well to live well’. I guess we’re just translating into action what consumers expect nowadays.” The effort has paid off faster than Chablé could have dared hope. Just a year after opening, the hotel received the 2017 Prix Versailles award, presented by UNESCO and the International Union of Architects to celebrate “structures that have the most remarkable interior and exterior architecture”. Last year, Ixi’im won the same award in the restaurant category. Being known as the world’s bestdesigned hotel with the world’s best restaurant has done no harm to business. Bookings have multiplied and Chablé’s wellness philosophy is being reinforced to a new generation of travellers.

Such has been the success of Chablé in Yucatán, Hamak is expanding. The first sister property, Chablé Maroma, opened near Cancun in 2018 after eight years in development. Unlike its faraway Yucatán counterpart, a different guest experience