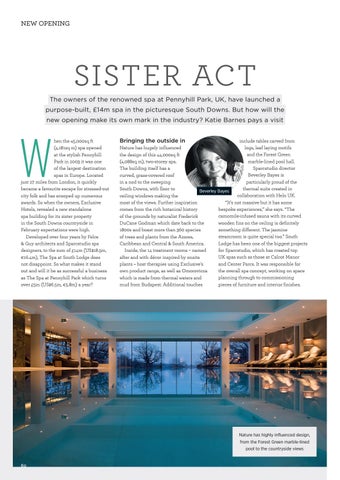 SISTER ACT The owners of the renowned spa at Pennyhill Park, UK, have launched a purpose-built, £14m spa in the picturesque South Downs. But how will the new opening make its own mark in the industry? Katie Barnes pays a visit

hen the 45,000sq ft (4,181sq m) spa opened at the stylish Pennyhill Park in 2003 it was one of the largest destination spas in Europe. Located just 27 miles from London, it quickly became a favourite escape for stressed-out city folk and has scooped up numerous awards. So when the owners, Exclusive Hotels, revealed a new standalone spa building for its sister property in the South Downs countryside in February expectations were high. Developed over four years by Felce & Guy architects and Sparcstudio spa designers, to the sum of £14m (US$18.5m, €16.4m), The Spa at South Lodge does not disappoint. So what makes it stand out and will it be as successful a business as The Spa at Pennyhill Park which turns over £5m (US$6.5m, €5.8m) a year?

Bringing the outside in

include tables carved from logs, leaf laying motifs Nature has hugely influenced and the Forest Green the design of this 44,000sq ft marble-lined pool hall. (4,088sq m), two-storey spa. Sparcstudio director The building itself has a Beverley Bayes is curved, grass-covered roof particularly proud of the in a nod to the sweeping thermal suite created in South Downs, with floor to Beverley Bayes collaboration with Helo UK. ceiling windows making the “It’s not massive but it has some most of the views. Further inspiration bespoke experiences,” she says. “The comes from the rich botanical history camomile-infused sauna with its curved of the grounds by naturalist Frederick wooden fins on the ceiling is definitely DuCane Godman which date back to the something different. The jasmine 1800s and boast more than 360 species steamroom is quite special too.” South of trees and plants from the Azores, Lodge has been one of the biggest projects Caribbean and Central & South America. for Sparcstudio, which has created top Inside, the 14 treatment rooms – named UK spas such as those at Calcot Manor after and with décor inspired by onsite and Center Parcs. It was responsible for plants – host therapies using Exclusive’s the overall spa concept, working on space own product range, as well as Omorovicza planning through to commissioning which is made from thermal waters and pieces of furniture and interior finishes. mud from Budapest. Additional touches

Nature has highly influenced design, from the Forest Green marble-lined pool to the countryside views 60