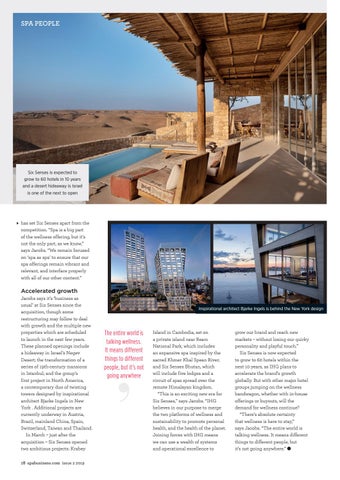 has set Six Senses apart from the competition. “Spa is a big part of the wellness offering, but it’s not the only part, as we know,” says Jacobs. “We remain focused on ‘spa as spa’ to ensure that our spa offerings remain vibrant and relevant, and interface properly with all of our other content.”

Accelerated growth Jacobs says it’s ‘business as usual’ at Six Senses since the acquisition, though some restructuring may follow to deal with growth and the multiple new properties which are scheduled to launch in the next few years. These planned openings include a hideaway in Israel’s Negev Desert; the transformation of a series of 19th-century mansions in Istanbul; and the group’s first project in North America, a contemporary duo of twisting towers designed by inspirational architect Bjarke Ingels in New York . Additional projects are currently underway in Austria, Brazil, mainland China, Spain, Switzerland, Taiwan and Thailand. In March – just after the acquisition – Six Senses opened two ambitious projects: Krabey 18 spabusiness.com issue 2 2019

Inspirational architect Bjarke Ingels is behind the New York design

The entire world is talking wellness. It means different things to different people, but it’s not going anywhere

Island in Cambodia, set on a private island near Ream National Park, which includes an expansive spa inspired by the sacred Khmer Kbal Spean River; and Six Senses Bhutan, which will include five lodges and a circuit of spas spread over the remote Himalayan kingdom. “This is an exciting new era for Six Senses,” says Jacobs. “IHG believes in our purpose to merge the two platforms of wellness and sustainability to promote personal health, and the health of the planet. Joining forces with IHG means we can use a wealth of systems and operational excellence to

grow our brand and reach new markets – without losing our quirky personality and playful touch.” Six Senses is now expected to grow to 60 hotels within the next 10 years, as IHG plans to accelerate the brand’s growth globally. But with other major hotel groups jumping on the wellness bandwagon, whether with in-house offerings or buyouts, will the demand for wellness continue? “There’s absolute certainty that wellness is here to stay,” says Jacobs. “The entire world is talking wellness. It means different things to different people, but it’s not going anywhere.” ●