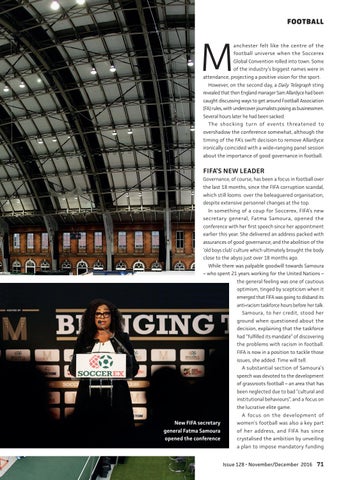 anchester felt like the centre of the football universe when the Soccerex Global Convention rolled into town. Some of the industry’s biggest names were in

attendance, projecting a positive vision for the sport. However, on the second day, a Daily Telegraph sting

revealed that then England manager Sam Allardyce had been caught discussing ways to get around Football Association (FA) rules, with undercover journalists posing as businessmen. Several hours later he had been sacked. The shocking turn of events threatened to overshadow the conference somewhat, although the timing of the FA’s swift decision to remove Allardyce ironically coincided with a wide-ranging panel session about the importance of good governance in football.

FIFA’S NEW LEADER Governance, of course, has been a focus in football over the last 18 months, since the FIFA corruption scandal, which still looms over the beleaguered organisation, despite extensive personnel changes at the top. In something of a coup for Soccerex, FIFA’s new secretary general, Fatma Samoura, opened the conference with her first speech since her appointment earlier this year. She delivered an address packed with assurances of good governance, and the abolition of the ‘old boys club’ culture which ultimately brought the body close to the abyss just over 18 months ago. While there was palpable goodwill towards Samoura – who spent 21 years working for the United Nations – the general feeling was one of cautious optimism, tinged by scepticism when it emerged that FIFA was going to disband its anti-racism taskforce hours before her talk. Samoura, to her credit, stood her ground when questioned about the decision, explaining that the taskforce had “fulfilled its mandate” of discovering the problems with racism in football. FIFA is now in a position to tackle those issues, she added. Time will tell. A substantial section of Samoura’s speech was devoted to the development of grassroots football – an area that has been neglected due to bad “cultural and institutional behaviours”, and a focus on the lucrative elite game. A focus on the development of

women’s football was also a key part of her address, and FIFA has since crystalised the ambition by unveiling a plan to impose mandatory funding