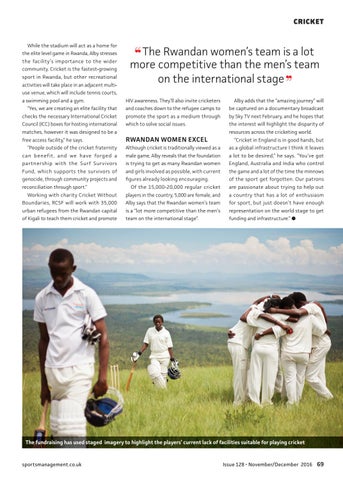 CRICKET While the stadium will act as a home for the elite level game in Rwanda, Alby stresses the facility’s importance to the wider community. Cricket is the fastest-growing sport in Rwanda, but other recreational activities will take place in an adjacent multi-

use venue, which will include tennis courts, a swimming pool and a gym.

Alby adds that the “amazing journey” will

“Yes, we are creating an elite facility that

and coaches down to the refugee camps to

be captured on a documentary broadcast

promote the sport as a medium through

by Sky TV next February, and he hopes that

which to solve social issues.

the interest will highlight the disparity of resources across the cricketing world.

matches, however it was designed to be a free access facility,” he says.

“Cricket in England is in good hands, but

“People outside of the cricket fraternity

Although cricket is traditionally viewed as a

as a global infrastructure I think it leaves

can benefit, and we have forged a

partnership with the Surf Survivors

is trying to get as many Rwandan women

England, Australia and India who control

Fund, which supports the survivors of

and girls involved as possible, with current

the game and a lot of the time the minnows

genocide, through community projects and

of the sport get forgotten. Our patrons

are passionate about trying to help out

Working with charity Cricket Without

a country that has a lot of enthusiasm

for sport, but just doesn’t have enough

urban refugees from the Rwandan capital

is a “lot more competitive than the men’s

representation on the world stage to get

of Kigali to teach them cricket and promote

team on the international stage”.